Amid hysteria surrounding the mysterious poisoning of Sergei Skripal, Britain is dedicating a significant part of the country’s anti-terrorism capacity…

Amid hysteria surrounding the mysterious poisoning of Sergei Skripal, Britain is dedicating a significant part of the country’s anti-terrorism capacity to look for Moscow’s hand in the former Russian double agent’s misfortune.

The UK government has diverted significant resources, with eight out of Britain’s 11 anti-terrorism units currently helping to investigate the poisoning of former GRU agent Sergei Skripal, Home Secretary Amber Rudd revealed, at a time when a “severe” international terrorism threat hangs over Britain.

“I want to stress that they are proceeding with speed and professionalism. We are putting in enormous resources to ensure that they have all the support that they need to do that,” said Rudd, after chairing a meeting of Cobra, the UK’s emergencies committee. 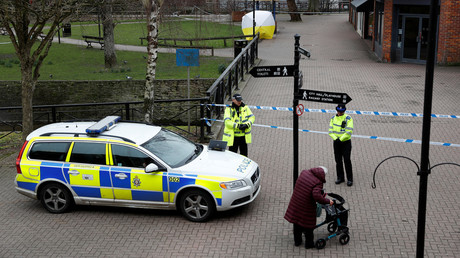 The UK believes that Skripal, 66, and his daughter Yulia, 33, were exposed to a nerve agent. The two were found slumped on a bench outside a shopping center in Wiltshire on March 4. British police say that more than 20 people in total were injured in the alleged attack, which has been described by authorities as “attempted murder.” Both victims remain unconscious and in a life-threatening condition.

Following the incident, authorities managed to collect 240 pieces of evidence and have identified some 200 witnesses to the crime, Rudd said, noting that 250 officers are taking part in the investigation. The incident is getting so much attention that the government will be sending the Armed Forces to Salisbury in order to handle potentially dangerous evidence in the area of the initial poisoning.

The BBC reported on Saturday night that traces of a rare nerve agent, thought to be used in the poisoning, were found in a local branch of Zizzi, a chain restaurant, and one of the five locations at the center of the police investigation.

On Sunday, Public Health England advised anyone who visited Zizzi or The Mill pub in Salisbury on March 4 or on the following day to wash the clothing they were wearing and to wipe clean personal items such as phones and handbags.

“While there is no immediate health risk to anyone who may have been in either of these locations, it is possible, but unlikely, that any of the substance which has come into contact with clothing or belongings could still be present in minute amounts and therefore contaminate your skin,” the government body said, as quoted by Reuters.

While Rudd insisted that the investigators “need to be given the space and time” so that they can be “absolutely clear” when assigning blame for the attack, British officials continue to insinuate that a foreign power – presumably Russia – was involved. Earlier, Foreign Affairs Minister, Boris Johnson vowed to respond “robustly” if evidence emerges of Russian involvement in the incident, seemingly disregarding that the former spy with a tainted reputation could have made enemies since settling in Britain in 2010.

“The key thing they need to be doing and they will be doing is to look at what Skripal has been doing in his life since he has moved to the UK. And I think this is where the motive for this attack is going to come from,” former MI5 agent Annie Machon told RT. “Let’s face it, in intelligence terms, he was a ‘busted flush’” with no apparent interest to the Russians. 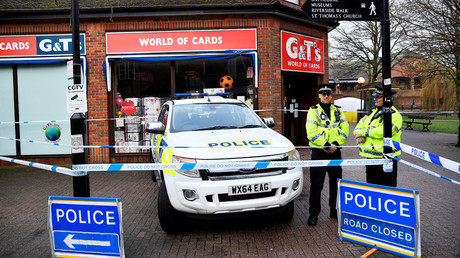 While it remains unclear what exactly happened to Skripal, the British media continue to compare the incident with the infamous case of the former Russian security officer Alexander Litvinenko, who died from radioactive poisoning in 2006. Litvinenko’s death sparked a major crisis in British-Russian relations, as many public figures in the West accused the Russian government of alleged involvement. Moscow denied responsibility.

According to the Times, Prime Minister Theresa May is a step away from naming Russia as the chief suspect in the alleged attempted assassination.

Now, the paranoia in the UK in the Skripal case is reaching massive proportions, with a junior minister calling on London to contact its NATO allies over the incident. “Some big questions arise, as to how do you stand up to a clandestine and sinister attack deliberately done to play havoc in our society?” said UK Government Minister at the Ministry of Defence Tobias Ellwood, vouching a “robust response.”

Meanwhile, security minister Ben Wallace said that the culprit would feel the “full force” of Britain’s might. “We will respond with the full force of the United Kingdom’s resources if that is the appropriate and proportionate thing to do.” Wallace told Radio 4.

“There are lots of things that the United Kingdom can do. It is a powerful country with a powerful economy, powerful allies, powerful military and powerful other capabilities – and we shall look at all those.”

Moscow, meanwhile, has labeled the coverage of Skripal’s poisoning as hysterical propaganda. Russian Foreign Minister Sergey Lavrov said Russia is blamed for everything that goes wrong on the planet, and noted that no facts had been presented to suggest any Russian involvement in this latest case. Moscow also reiterated that it is prepared to cooperate with a British investigation.

Skripal worked as a double agent for the UK intelligence agency MI6 and was jailed in Russia in 2006 for spying for Britain, having passed on the names of undercover Russian intelligence agents. He was pardoned and released four years later as part of a “spy swap” between the US and Russia.

BBC health correspondent ‘spiralled rapidly downhill’ after Covid jab & could ‘barely’ get out of bed, but says he’d do it again