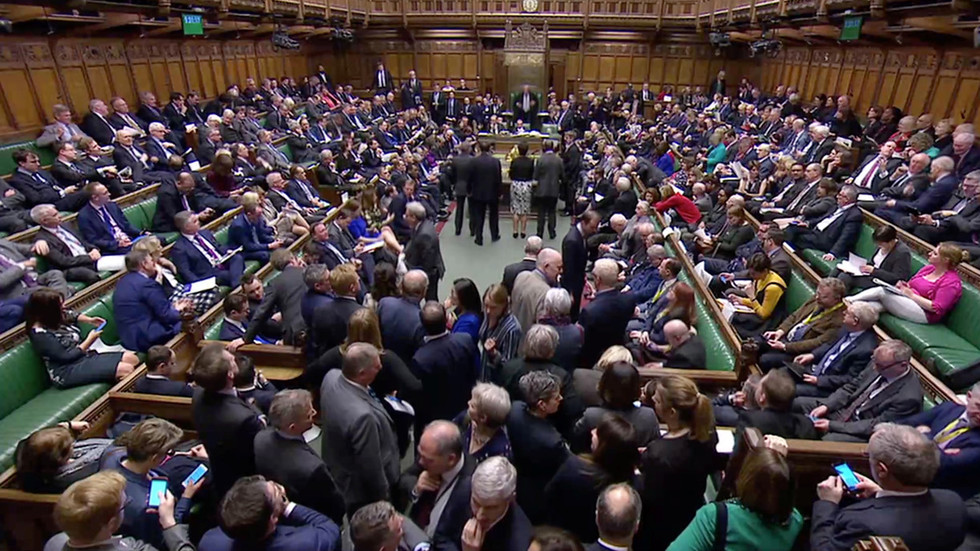 MPs in the House of Commons voted in favor of the government motion by 412 votes to 202. Now Tory administration should request from the EU an extension to Article 50 and delay Brexit until June 30 to secure a deal.

The adoption of the government motion, which came after a string of House defeats to the Brexit plan, has apparently reinvigorated Theresa May and her cabinet.

“The cabinet collectively agreed to redouble their resolve in working to deliver on the result of the referendum to leave the European Union by securing support for a deal,” the spokesman said.

However the voting saw another ministerial rebellion, as a number of ministers voted against the government-tabled motion.

Brexit Secretary Steve Barclay’s vote has particularly raised many eyebrows, given his position alone. The statements he made just ahead of voting against the government’s motion however left the public even more astounded by the move.

This evening the Brexit Secretary voted against his Government’s own motion on Brexit, which earlier in the day he had defended in the House of Commons.

That’s the equivalent of the Chancellor voting against his own Budget. This is a Government that has lost complete control. https://t.co/xGjnF3g7Ip

The vote has been met with quite a reserved reaction in the EU, which reminded the UK that any extension of the Brexit process must be approved by all the other nations of the bloc.

“We take note of tonight’s votes. A request for an extension of Article 50 requires the unanimous agreement of all 27 Member States,” a EU Commission spokesperson said, adding that such a request is to be considered by the European Council while “taking into account the reasons for and duration of a possible extension.”

Following the vote, the result of which was quite expected, Labour leader Jeremy Corbyn urged for a public vote on the matter, calling it the only proper way to untangle the Brexit deadlock.

“Tonight I reiterate our conviction that a deal can be agreed based on our alternative plan that can command support across the House. And I also reiterate our support for a public vote not as political point-scoring but as a realistic option to break the deadlock,” Corbyn said.

Corbyn’s Labour party, however, has largely abstained from voting on an amendment for the motion, which called for the extension of Article 50 to hold a second referendum. The lawmakers rejected both the amendment calling for a second referendum as well as Corbyn’s proposal on an unspecified extension to seek a majority for a “different approach.”

Dismal failure of leadership from both Govt and opposition. Feels like we are all locked in a car with no handbrake, incompetent drivers & just rolling ever closer to the edge of the cliff.

Arguably one of the biggest surprise of the whole vote came from Steve Baker, the former Brexit minister, who voted against the Article 50 extension.

Cabinet ministers and Government whips rebelled against the government motion on extension and no Tory Whip even stayed in Government lobby to check all out in their own lobby.

The day of debate saw a relatively low turnout of MPs, particularly on the government benches, on what is commonly seen as one of the most important constitutional issues the UK has faced in its history.

Also on rt.com Brexit bog: ‘No delay from EU – or we elect 73 Nigel Farages into European Parliament’

Despite a lack of parliamentarians, tensions came to the boil over the Labour Party refusing to back the amendment calling for a second referendum. The SNP Westminster leader, Ian Blackford branded Jeremy Corbyn’s party a “disgrace.”

Backbench Tory Brexiteer Christopher Chope, caused a stir after claiming that he would “consider” a vote of no confidence in the Tory Government if Labour tabled one – becoming the first Conservative MP to explicitly say so in public.

Social media has been dominated by those frustrated at the apparent mess MPs have found themselves in over Brexit.

Also on rt.com May to give MPs free vote on delaying Brexit, after 2 crucial defeats for UK government

There’s been a mixed reaction from the EU to the prospect of the UK requesting a delay to Brexit.

On Thursday, President of the European Council Donald Tusk took to social media to reveal that he will be appealing to the EU27 members to remain open to the idea of offering the UK a long extension period, if they need time to rethink their Brexit strategy.

According to an official for President Emmanuel Macron, France will not support delaying Brexit if it simply means revisiting May’s Withdrawal Agreement, insisting it is “out of the question.”

“So it’ll either be a no-deal now, or a change of plan from London, of which we see no sign at the moment,” the official added.