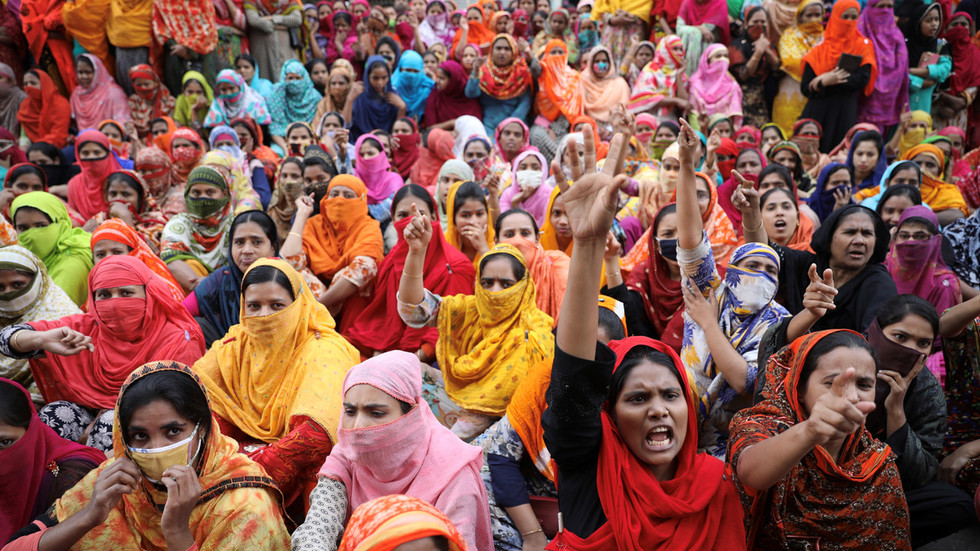 An ’empowerment’ oriented clothing brand has stopped selling its “girl power” T-shirts after a report revealed they were being made by exploited women in a sweatshop in Bangladesh. But at least the cotton they used was organic?

In a case of robbing Patty to pay Pauline, the UK-based F= sold cheap shirts made at DIRD Composite Textiles in Bangladesh in order to raise money for Worldreader, a charity that provides e-books for impoverished children in Africa. The prints themselves were done in the UK.

F= said that there was a “huge demand” for the shirts, even getting celebrity endorsements from TV presenter Holly Willoughby and former Spice Girl Emma Bunton.

Meanwhile, scores of the machinists who actually made the shirts were sacked after they went on strike to protest their paltry wages and horrific working conditions.

Sadly, pay as low as $ 0.56 an hour is only the tip of the iceberg. The shirt’s message of women’s empowerment seems particularly ironic in light of the fact that the company producing it was recently forced to compensate a female worker who claims to have been severely beaten and threatened on management’s orders. Somewhat of a departure from F=’s claim on their website, where the factory was described as “vetted for good working conditions and fair wages.”

Just in case someone was inclined to give them the benefit of the doubt and regard the incident as an oversight, F=’s response to the Guardian’s expose makes things abundantly clear. The group’s co-founder Danielle Newnham wrote that, while she agrees with the mission of the report in spirit, it “does not seem to connect with what we are learning from those with first-hand experience of people working on the ground in Bangladesh.”

Newnham talked about how the workers “left” the factory following the strikes (as opposed to being fired) before distancing herself from the production process altogether, saying she had never even spoken with the distributor until the article was published.

The second half of the response is a letter from the company that contracts the factory, Stanley/Stella, who hinted that the Guardian’s journalist was personally harassing them, argued that their wages were totally legal in Bangladesh and, like all trustworthy people, assured they “have nothing to hide”.

The icing on the cake is Newnham spending the last few days tweeting about how difficult all of this has been for HER, and how the day she first read the expose was the hardest of her “working life.”

My heart is broken. Yesterday was the most difficult day of my working life. And I don’t share that easily.

But this is different…

Considering what the workers at the bottom of her mission for “empowerment” claim to have experienced in their working lives, she might count herself lucky.

That being said, her brand isn’t the first to come under fire for t-shirt slogan hypocrisy. Back in 2014, it was revealed that shirts bearing the message “This is what a feminist looks like,” which had been sported by a number of prominent politicians, were being made on an island in the Indian Ocean by workers making a quarter of the legal minimum wage.