In 2004, then-Senator Barack Obama wowed the country with an address at the Democratic National Convention designed to unite the… 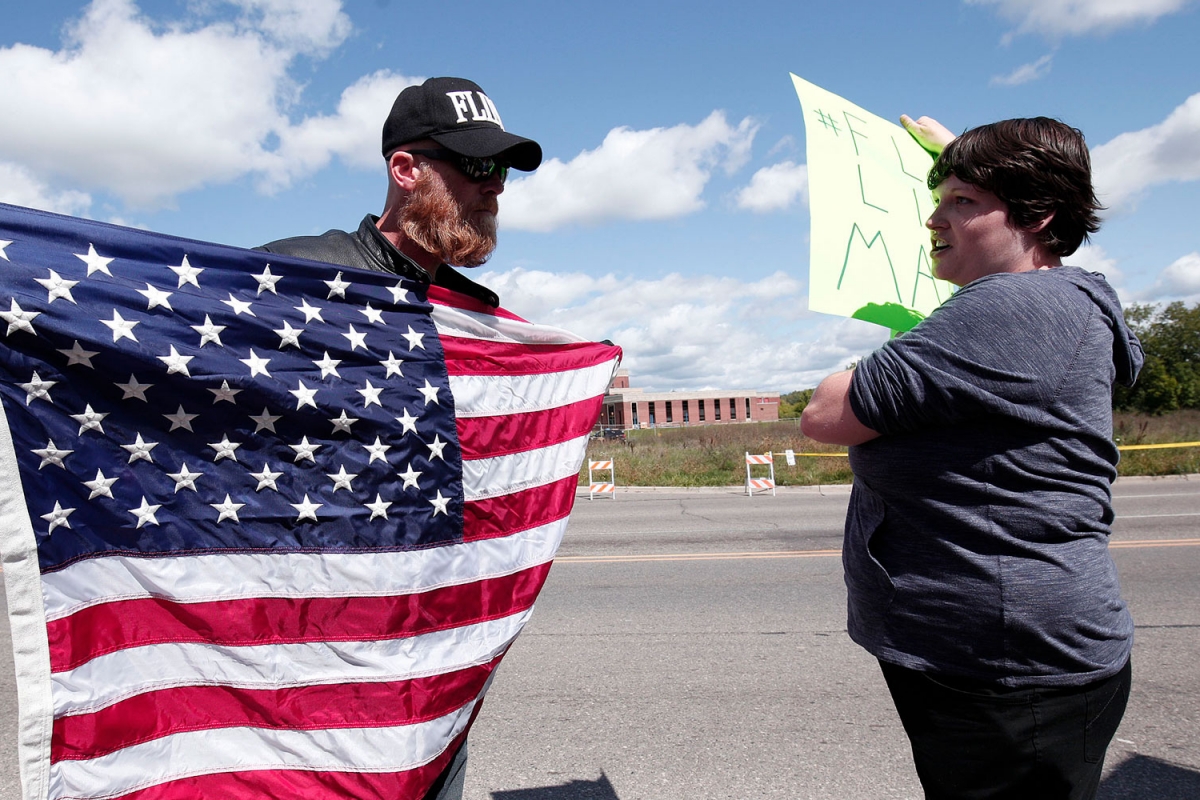 In 2004, then-Senator Barack Obama wowed the country with an address at the Democratic National Convention designed to unite the country and tear down partisan divides.

“Now even as we speak, there are those who are preparing to divide us, the spin masters and negative ad peddlers who embrace the politics of anything goes,” he said. “Well, I say to them tonight, there’s not a liberal America and a conservative America; there’s the United States of America.”

He talked about how in so-called blue states they “worship an awesome God” and about how people have gay friends in red states. “There’s not a black America and white America and Latino America and Asian America; there’s the United States of America,” he said to thunderous applause.

The years since then have softened the national debate over marriage equality, but the question of how we fall into color-coded political patterns has gotten even more resonant. While support for same-sex marriage has increased, for instance, support for “interpolitical marriage” — specifically, Gallup asked adults about the prospect of their son or daughter marrying someone of a different political background — has actually gone down.

But what if the source of this polarization has little do with where people actually fall on the issues, or what people actually believe in? What if people are simply polarized by political labels like “liberal” and “conservative” and what they imagine their opponents to be like more than they are by disagreements over issues like taxes, abortion, and immigration?

That news wouldn’t surprise anybody who’s spent time battling it out in a news outlet’s comment section, and it’s the firm conclusion of new research by Lilliana Mason, a professor at the University of Maryland.

Her paper, “Ideologues Without Issues: the Polarizing Consequences of Ideological Identities,” published in late March by Public Opinion Quarterly, uses 2016 data from Survey Sampling International and American National Election Studies to study how and why Americans are politically polarized.

She used measures that identify both where people stand on issues and how they identify their political clan. For issues, she took six major ones from the survey: “immigration, the Affordable Care Act, abortion, same-sex marriage, gun control, and the relative importance of reducing the deficit or unemployment.” Additionally, she used their measurements of social identity on a range from liberal to conservative.

She then sought to correlate these answers with questions where respondents answered whether they would prefer to live next door to, marry, be friends with, or spend social time with someone who differs from them politically.

She found that the political identity people adopt was far more predictive of their preferences for social interaction.

For instance, “moving from the least identified to the most identified with an ideological label increases preference for marrying inside the ideological group by 30 percentage points.” In other words, if you are a committed liberal, you’re much more likely to want to live next to other committed liberals. But if you just disagree strongly with them about a specific issue like abortion, not so much.

She writes, “The effect of issue-based ideology is less than half the size of identity-based ideology in each element of social distance. … These are sizable and significant effects, robust to controls for issue-based ideology, and they demonstrate that Americans are dividing themselves socially on the basis of whether they call themselves liberal or conservative, independent of their actual policy differences.”

“There’s been a debate within political science for a long time about whether or not the American public is polarized,” Mason said in an interview with The Intercept. “I’m sort of making this argument that as you have multiple social identities that line up together, people hate their out groups more regardless of their policy positions.”

The loose connection some voters have with policy preferences has become apparent in recent years. Donald Trump managed to flip a party from support of free trade to opposition to it by merely taking the opposite side of the issue. Democrats, meanwhile, mocked Mitt Romney in 2012 for calling Russia the greatest geopolitical adversary of the United States, but now have flipped and see Russia as exactly that. Regarding health care, the structure of the Affordable Care Act was initially devised by the conservative Heritage Foundation and implemented in Massachusetts as “Romneycare.” Once it became Obamacare, the Republican team leaders deemed it bad, and thus it became bad.

Mason believes the implications of such shallow divisions between people could make the work of democracy harder. If your goal in politics is not based around policy but just defeating your perceived enemies, what exactly are you working toward? (Is it any surprise there is an entire genre of campus activism dedicated to simply upsetting your perceived political opponents?)

“The fact that even this thing’s that supposed to be about reason and thoughtfulness and what we want the government to do, the fact that even that is largely identity-powered, that’s a problem for debate and compromise and the basic functioning of democratic government. Because even if our policy attitudes are not actually about what we want the government to do but instead about who wins, then nobody cares what actually happens in the government,” Mason said. “We just care about who’s winning in a given day. And that’s a really dangerous thing for trying to run a democratic government.”

She suggested a solution: Spend some time talking to your neighbors, friends, and loved ones about things besides politics.

“The problem is not a policy-based problem, because on average we’re relatively moderate in these policy attitudes. Talking to each other about political stuff is sort of the worst solution ever, because all that’s going to do is activate our political identities, which cause us to dislike each other. The better thing to do is if your next door neighbor is of a different political orientation than you, to talk about their dog, or what’s going on in their family,” Mason said. “In general, the best way to get through this polarization is to start thinking of each other as human beings.”

Top photo: A Trump supporter (left) and an anti-Trump protestor (right) have a discussion while waiting for then-presidential candidate Donald Trump to arrive for a tour of the Flint Water Treatment Plant in Flint, Mich., on Sept. 14, 2016.