Bob Corker’s two-term career as a Republican senator from Tennessee ended Thursday with the swearing in of his successor, Marsha Blackburn…. 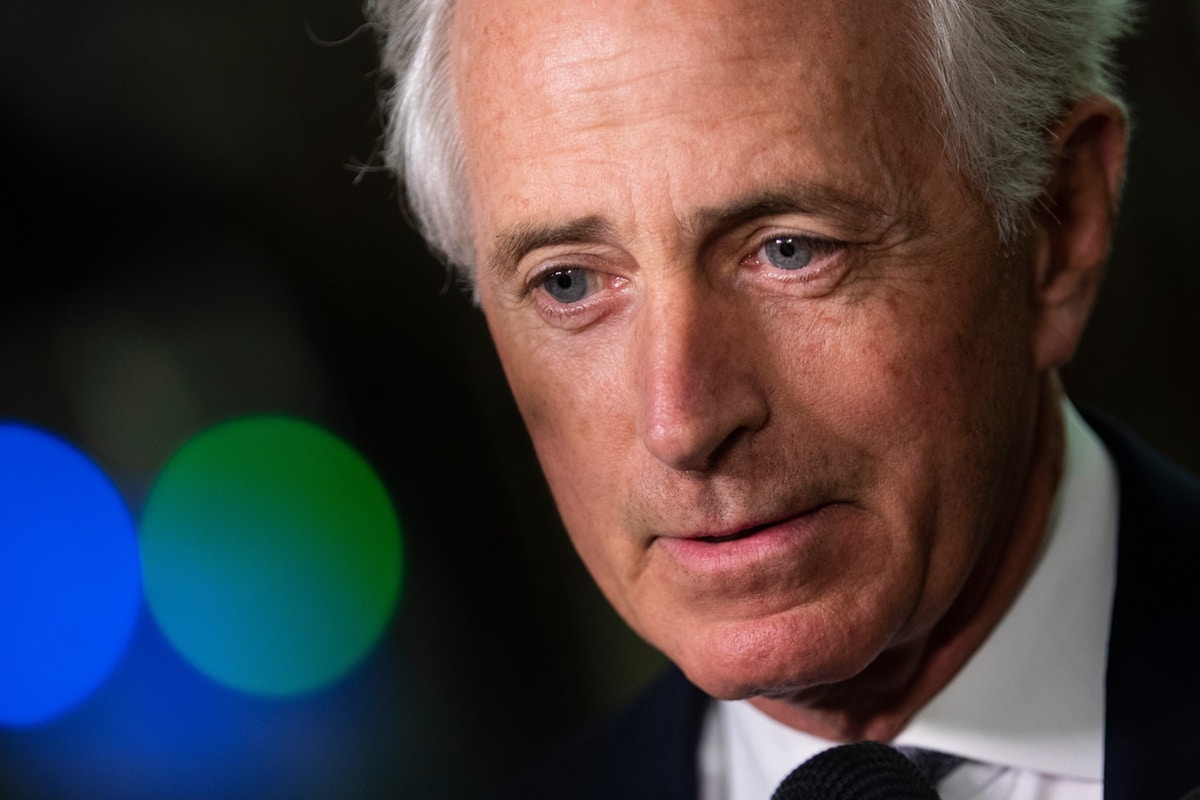 Bob Corker’s two-term career as a Republican senator from Tennessee ended Thursday with the swearing in of his successor, Marsha Blackburn. While Corker was one of the few members of the GOP who has publicly attacked Donald Trump, he was frequently criticized for hypocrisy for failing to take any meaningful actions to restrain the president.

Such judgements are fundamentally unfair to Corker. He’s acted like this his entire career, not just regarding Trump.

Most notably, Corker occasionally murmured about the Republican Party’s most blatant appeals to racism, while doing nothing about it with his power as a senator.

This is particularly maddening or hilarious or both because he was elected to the Senate in the first place with the help of a notoriously racist ad.

Corker, previously the mayor of Chattanooga, Tennessee, defeated Rep. Harold Ford Jr. in 2006. It was a big year for Democrats: They won 22 out of 33 Senate races, with Republicans taking just nine. In addition, the other two victors — the sole candidate from the Connecticut for Lieberman Party, plus a white-haired independent curmudgeon from Vermont — both caucused with the Democrats. This tipped control of the Senate back into their hands.

The blue wave was so big that Corker was the only nonincumbent Republican who won that year. And he almost didn’t pull it off: Ford was from a prominent African-American political family in Memphis, the son of a U.S. representative and the nephew of a state senator. Of the seven polls from the first half of the October prior to the election, Ford was ahead in five, often by significant margins, and tied in one. In the end, Corker won by just 50,000 votes out of 1.8 million cast, or 2.7 percent.

What turned it around for him? It’s impossible to be sure of anything in politics, of course. But this ad aired in Tennessee during the second half of October. See if you can spot the extremely subtle racial messaging:

In case you missed it, the ad includes a blond white woman exclaiming, “I met Harold at the Playboy party!” and then winking and whispering, “Harold … call me.”

The spot was paid for by the Republican National Committee and produced by Scott Howell, a former employee of Karl Rove. Howell had previously come up with an ad for Sen. Tom Coburn that accused his opponent of mollycoddling welfare recipients, over footage showing the hands of someone black counting money.

Corker complained mildly about the ad, calling it “tacky” and “over the top,” and saying it “does not reflect the kind of campaign that we are running.” It was eventually pulled and replaced in most of the state. The holdout was one of Chattanooga’s stations, because it found the new ad even worse: The replacement cheerily explained that Ford “wants to give the abortion pill to our schoolchildren.”

Fast-forward 12 years and two senatorial terms to 2018. Corker was retiring, and Blackburn was the GOP nominee for the seat.

The Democratic candidate, Phil Bredesen, was close or ahead in several September and early October polls. Then in late October, Blackburn ran this ad about the so-called caravan of refugees headed to the U.S. via Mexico. Again, try to figure out — as the narrator describes the refugees as “gang members … known criminals … people from the Middle East … possibly even terrorists!” — if there’s some kind of racial angle here:

Just as in 2006, Corker was against this vile fear-mongering. He even went so far as to say, “To make pejorative statements about all of them … I don’t approve of that.” Corker received praise from the Washington Post for his bold stand. Then, just as in 2006, the character supported by the grisly, pandering ads won.

Sadly, during the decade-plus bookended by these two ads, Corker’s concerned frowns did not translate into any meaningful legislation or leadership.

In 2013, the Supreme Court ruled that key sections of the Voting Rights Act of 1965 were unconstitutional, thereby making voting suppression by the GOP easier. Congress had the power to pass an amendment to the act fixing the situation, but, Corker stated, “I doubt that will ever happen.” Why? Because, he said in one of the vaguest sentences ever uttered in the English language, “One group of folks would have to be saying another group of folks have some tendencies in a direction that are not good.”

Of course, Corker himself had the power to say that about the tendencies of a group of folks. He did not. He could have co-sponsored a proposed 2014 amendment to the Voting Rights Act that would have fixed the situation. He did not.

What Corker could do was vote for a GOP bill that made it easier for car dealerships to steer African-American and Latino borrowers into higher cost loans. He was also able to endorse Trump early in the 2016 campaign. Then, when asked, “Do you or do you not think that it’s problematic that the Klan thinks that the Republican presidential nominee is a white supremacist?” he was able to respond, “I have no knowledge of what the groups that you’re talking about think.” When Trump famously said there were “very fine people on both sides” at the deadly 2017 white supremacist rally in Charlottesville, Virginia, Corker managed to say, “Look, I let the president’s comments speak for themselves.”

That’s not all there was to Corker, of course. He was also well-known for negotiating with Democrats right up to the moment of decision, at which point he would sigh and vote with hard-line Republican senators. Also, after the 2016 election, he briefly had a shot at being named secretary of state, but Trump decided that he was too short.

But now the Corker Era is over. When announcing his retirement, Corker spoke of his admiration for the “citizen legislator model,” in which Americans do not aspire to become lifetime politicians. Following this path, he will now return to the private sector, to which he will bring all his years of practice at looking apprehensive while remaining 98 percent inert.