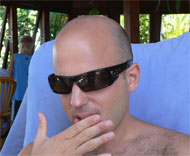 Both men are bald, Meeks has more tatts

Eminent Justice Department honcho Matthew Whitaker, acting successor to the fired Jeff Sessions, was dubbed ‘as hot as they come’ at a Congressional hearing Friday due to his physical resemblance to Jeremy Meeks.**

Monaco-based model Jeremy is the current impregnator of pointless Brit richkid Ms Chloe Green whose billionaire dad Philip is a bit of a spiv.

Commenting on the million-dollar earning catwalk sensation a Hearing insider said Meeks, 69, has form as an ex-federal felon who served jailtime at Mendota Federal Correctional Institute.

Mostly for firearm possession and grand theft during his time as a member of the North Side Gangster Crips.

Both men are bald but look good in leopardprint. (Nah, snakeskin – Ed)