Spread the love Phoenix, AZ — The Phoenix police department made national headlines this month after holding a family at… 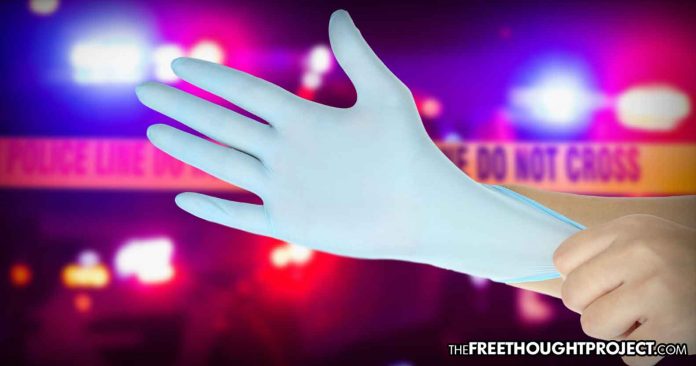 Phoenix, AZ — The Phoenix police department made national headlines this month after holding a family at gunpoint and threatening to shoot a pregnant mother, holding her baby, in the “f**king head.” Now, once more, they are receiving attention again after being name in a lawsuit for violently sexually assaulting a woman as they looked for non-existent drugs.

The horrifying incident for Reynolds began on December 26, 2018. Officers claimed to have seen Reynolds talk to a man who was under surveillance for being at the center of a drug investigation, Charles Riggins.

After police watched Reynolds drive away from Riggins, they pulled her over and claimed to smell marijuana in her car. The alleged odor of marijuana was used a probable cause to search Reynolds’ vehicle, pat her down, and bring a drug-sniffing K-9 out. The search, the pat down and the dog yielded no evidence of drugs. However, police just knew that Reynolds must have shoved all the drugs into one of her bodily orifices, so they took her in for further “investigation.”

Once they had her in the jail, according to the lawsuit, Reynolds was stripped down to just her socks and brought to a substation where they told her to bend over. A female cop then used her fingers to probe Reynolds’ anus and vagina to look for the non-existent drugs.

“As the officer inserted multiple unlubricated fingers into Erica’s anus, probing her rectum, the tears flowed,” according to Reynolds’ claim. “And as the officers aggressively poked and prodded a hemorrhoid, Erica yelped in pain.”

Police do not dispute giving Reynolds a double cavity search either and they claim it was their right to do so after smelling the marijuana.

According to the department’s own guidelines, however, the search conducted on Reynolds was a violation of policy as inserting fingers into suspects is only to be conducted by a medical doctor and the suspect must provide consent or a warrant must be issued. None of these criteria were met before police violated Reynolds, according to the lawsuit.

“Our bodies are not to be treated this way without consent. Erica begged that officer to stop.”

After the search, according to the lawsuit, Reynolds was left bleeding and in need of medical attention. The search found nothing and Reynolds was not charged.

She was however brought to the hospital to be treated for the injuries sustained during her violent sexual assault. According to the lawsuit, hospital staff documented signs of sexual assault and rectal bleeding.

After Reynolds was released, she filed complaints with the department, who, according to the lawsuit, refused to investigate Reynolds’ abuse claims or authorize the hospital to conduct a rape kit examination.

Two moths after the original arrest, Reynolds was arrested again on Feb. 6. According to the Phoenix New Times, “In her claim, Reynolds’ attorneys said the real reason for Reynolds’ arrest on February 6 was to thwart her plans to speak out about her body cavity search during a City Council meeting that same day. Attorneys Hamel and Benedetto also alleged that police coerced Reynolds into giving a confession during a six-hour interrogation.”

Prosecutors have yet to file charges against Reynolds.

“Nothing that Erica did before December 26, 2018 justifies police officers performing a body cavity search after an illegal arrest, without a warrant, and without a medical professional present,” says the notice of claim, which was prepared by The People’s Law Firm and addressed to the city, Mayor Kate Gallego and Police Chief Jeri Williams.

“Their conduct was incontrovertibly unconstitutional, unlawful, and criminal. The only question is whether you will attempt to justify it – and the message you will send by doing so.”

On Monday, only after Reynolds announced the plans for a lawsuit, police announced the officer who conducted the body cavity search was being suspended. However, they were quick to justify the reason for the search.

The Phoenix Police Department’s statement emphasized that Reynolds is a “a criminal suspect in an 18-month long investigation involving numerous criminal defendants, illegal drug sales and conducting a criminal enterprise.”

As the Phoenix New Times reports, Reynolds’ attorneys criticized the police response to their notice of claim as nontransparent.

“As predicted in our notice of claim, the statement appears to aim squarely at publicly justifying the officers’ conduct by arguing that Erica Reynolds broke the law,” Benedetto said in an email. “In doing so, Phoenix PD seems to be telling the public (and, more concerningly, its officers) that a mere suspicion that a citizen breaks the law is sufficient to justify its officers in violating the constitution.”

In the land of the free, cops will claim to smell a plant on you and use that claim to violate your body in the most horrific way. And some people still have the audacity to call this “justice.”