Protesters chant during the March for Our Lives rally along Pennsylvania Avenue March 24, 2018, in Washington, DC. Hundreds of… 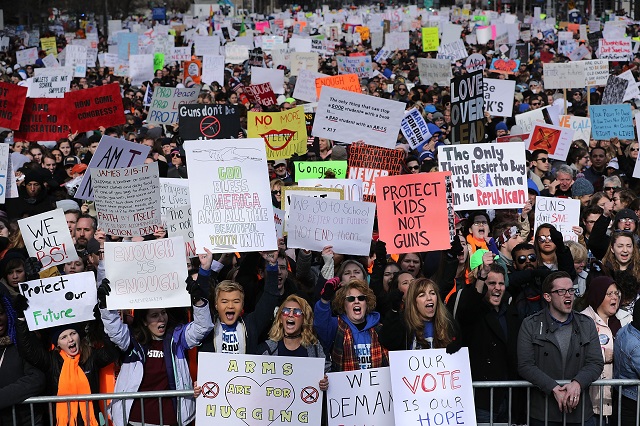 Protesters chant during the March for Our Lives rally along Pennsylvania Avenue March 24, 2018, in Washington, DC. Hundreds of thousands of demonstrators, including students, teachers and parents gathered in Washington for the anti-gun violence rally organized by survivors of the Marjory Stoneman Douglas High School school shooting. (Photo: Chip Somodevilla / Getty Images)

Ready to make a difference? Help Truthout provide a platform for exposing injustice and inspiring action. Click here to make a one-time or monthly donation.

Ahead of the historic “March for Our Lives” demonstrations taking place nationwide on March 24, student journalists from Majory Stoneman Douglas High School in Parkland, Florida — the site of a shooting last month that left 17 dead — published a manifesto in The Guardian on Friday declaring that they can no longer “stand idly by as the country continues to be infected by a plague of gun violence.”

“We have a unique platform not only as student journalists, but also as survivors of a mass shooting. We are firsthand witnesses to the kind of devastation that gross incompetence and political inaction can produce,” wrote the students, who work for the Stoneman Douglas school newspaper The Eagle Eye. “We will be marching this Saturday for those that we loved and lost, and we write this in the hope that no other community or publication will ever have to do the same.”

The proposals outlined by the Parkland student journalists in advance of Saturday’s events — which have drawn hundreds of thousands to the streets in all 50 US states and in major cities across the globe — include:

“We believe federal and state governments must put these in place to ensure that mass shootings and gun violence cease to be a staple of American culture,” the students conclude.

According to recent survey data, many of the policy changes proposed by the Parkland students are broadly popular. An AP-NORC poll published on Friday found that “nearly 7 in 10 adults now favor stricter gun control measures,” which is “the strongest level of support since the Associated Pressfirst asked the question five years ago.”

Saturday’s marches further demonstrated the widespread support throughout the US for stricter gun control legislation. According to the March for Our Lives website, 840 events were planned in all 50 states and in major cities across the globe, including Paris, Madrid, London, Tokyo, and Seoul.

“This trip is showing the politicians the true meaning of democracy,” Stoneman Douglas student Demitri Hoth, who is traveling from Florida to Washington, DC for the event, told CNN in an interview. “They are not there to serve groups; they are there to serve people. It’s time for us to take control and be heard.”