miracle cure? Tel Aviv IL: Pharmer Pharmaceuticals is drawing criticism over an alleged breakthrough psychiatric drug which is touted as… 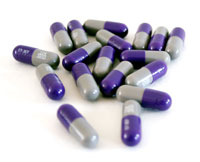 Tel Aviv IL: Pharmer Pharmaceuticals is drawing criticism over an alleged breakthrough psychiatric drug which is touted as a first in it's class. There are currently 3 groups of medications used for epilepsy, bipolar disorder, and schizophrenia. Among them are: neuroleptics, sedatives, and anticonvulsants.

So what exactly is Pulumbra? According to Pharmer spokeswoman Nomi Abaddon the active ingredient is plumbic acetate. In layman's terms it's lead. Yes lead. The stuff which may have attributed to the Roman empire's slow decline into darkness.

Psychopharmacologist Horton Hall of the CDC just chuckled and said, "Well, to play devil's advocate, if you look at what lead poising does in it's totality many of the behavioral symptoms are on par with anti-psychotic drugs. Even the side effects of current meds. Actually anti-psychotics have a few more side effects, for example lead poisoning isn't really known for hair loss or male breast enlargement with galactorrhea. I'm almost starting to think this could be a safer alternative- I'm kidding of course."

According to Ms. Abaddon, "The medication is a more natural alternative to synthetic chemicals. Poison, medicine it's all about dosing. We use radiation to treat cancer all the time but I wouldn't advise carrying plutonium around in your pocket for good luck. This attack on our drug is generated by Russian influence through fake news. It's a problem we suffer with just as the United States does. It's really more about attacking Israel and any country with free democratic ideals than issues of health care."

As I reflected on this conversation I found some silver lining. Perhaps Flint Michigan can turn their water contamination crisis into a real money machine! Seriously, just think of it….. Flint Miracle Elixir: Bottled at the Source USA. I believe it would work too- just so long as they offer a carbonated lemon/lime version.