The most important fact to come out of this week’s “Timeless” episode: NOTHING HAPPENED, THEY JUST TALKED, OKAY? Of course… 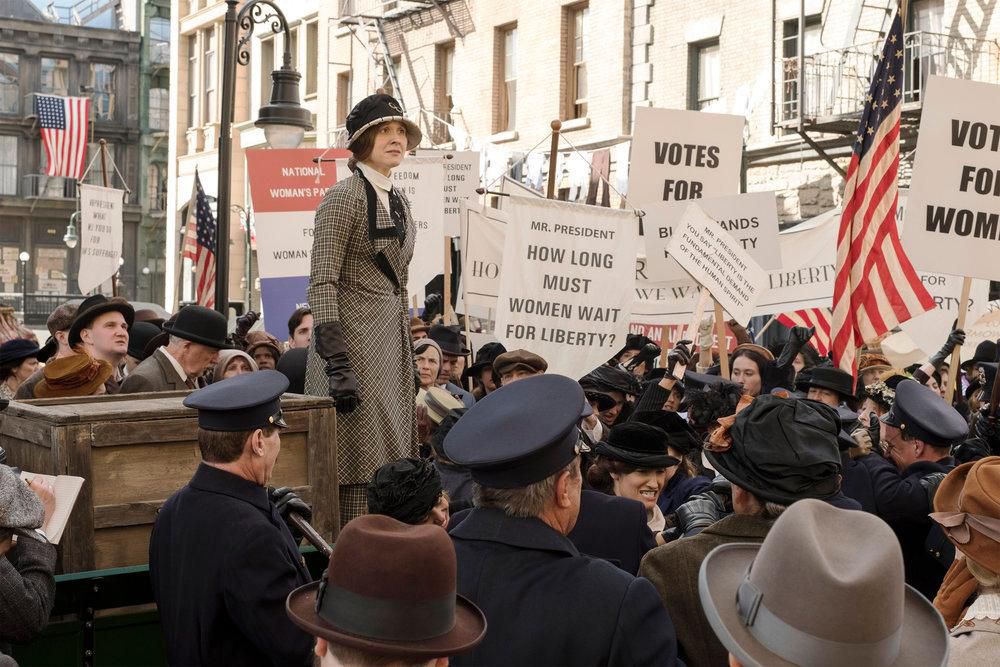 The most important fact to come out of this week’s “Timeless” episode: NOTHING HAPPENED, THEY JUST TALKED, OKAY?

Of course I’m referring to Lucy disappearing into Flynn’s room at the end of “King of the Delta Blues” and emerging the next morning with rumpled hair. Wyatt sees this and spends basically the whole episode being jealous and possessive. He knows, just as well as all of you do, that there’s only one bed in that room.

Wyatt’s possessiveness is of course totally on-brand with the themes of this week’s episode, which takes us to 1919 and the height of the women’s suffrage movement. As we see in the opening teaser, the date is March 4, 1919: Prominent suffragist Alice Paul and 200 other women march for their rights in front of New York City’s Metropolitan Opera House, where President Woodrow Wilson is scheduled to speak about the League of Nations. New York’s finest begin attacking the protesters as Wilson and Senator James Wolcott Wadsworth, Jr., walk up the opera house steps,, but amid the chaos, Paul pleads directly with Wilson to support suffrage. His heart is touched, both by the speech and by the brutal treatment of the women, and he nods his head in agreement. (The 19th Amendment is passed by the Senate just three months later.)

As per usual, this week’s episode hinges on the question of what if all that never happened.

Which, in real history, is mostly the case. The march itself did occur outside the opera house, albeit at night, where Wilson did in fact give a speech. Paul was there, and she was arrested, but there’s no evidence that she spoke to Wilson, or that Wilson even noticed the suffragists. In this clipping from an unknown newspaper the reporter describes the violence the estimated 100 policemen inflicted inflicted on 40 of the women: Women were “bruised and trampled upon…[with] black eyes, broken lips and bruised cheeks…bleeding and court plastered, arms and hands were sprained, clothing torn to tatters and hair falling down their backs.”

During the protest, according to the report, the women “carried conspicuous banners with purple lettering on a background of white. The largest of these, a six foot affair, bore the legend: ‘Mr. President, What Are You Going to Do for Women Suffrage.’”

By this point, however, Wilson was already in favor of suffrage; his mind had been changed after learning about the brutal treatment of suffragists like Paul who had, prior to this date, picketed the White House and been imprisoned, force-fed to break hunger strikes, and sometimes brutally beaten. By 1918, Wilson had publicly spoken before Congress endorsing women’s rights to vote.

Senator Wadsworth, a Republican from New York, was not as enlightened and was staunchly anti-suffrage; he was one of the 25 senators to vote against the 19th amendment in Congress. This makes him the logical target for Rittenhouse’s latest scheme: frame Alice Paul for his murder so she gets locked up before she can deliver her history-changing speech to Wilson. The Time Team teams up with Lady Detective Grace Humiston to clear Paul’s name. Along the way, Rittenhouse agent Emma briefly joins up with the good guys, supposedly because she believes in women’s lib, but one can never truly trust anyone from Rittenhouse.

Humiston is one of those figures not taught in history class, but perhaps should be. A real-life heroine, Humiston was a lawyer at a time when very few women were and opened a practice called The People’s Law Firm, which specialized in helping immigrants and low-income Americans. While investigating a missing persons case, she traveled to the South and unraveled the exploitative “peonage” system, under which immigrants were recruited on the false promises of high wages and opportunities for advancement, only to arrive at the turpentine and lumber camps already in debt to their new bosses, and unable to leave. Humiston busted the peonage rings and was appointed special assistant U.S. District Attorney in 1906, just two years after she passed the bar.

By 1917, she had started working as a detective. Her fame was enough that a wealthy man hired her to investigate the case of his missing daughter, Ruth Cruger. Although Ruth taught Sunday school and had no boyfriend, the NYPD concluded that Ruth had eloped and closed the case. Humiston doggedly pursued the case and ultimately found Cruger’s body beneath a motorcycle shop that the police had supposedly already searched twice. (More details on the case, and the police kickback scheme it uncovered, can be found in Smithsonian.com’s 2011 article.) The press named her “Mrs. Sherlock Holmes” and the NYPD named her special investigator in charge of missing girls, which is where Lucy and Wyatt find her.

Humiston discovers who actually murdered the senator and then fatally poisons Paul while she’s imprisoned (it’s another Rittenhouse sleeper agent), bu without Paul to give the speech, Lucy argues that someone else should. Here, Lucy and Humiston are written so as to be pitted against each other: Lucy is all, “There’s a special place in hell for women who don’t help each other,” and Humiston is all, “I pulled myself up by my bootstraps and so should those other women.”

When the time comes, Humiston, apparently inspired by Lucy’s gumption and by the sacrifices the other marchers are making, stands tall and delivers the speech Paul was supposed to have made as Wilson looks on. It works, and when the team returns to the present, women still have the vote.

Next week the team travels to 1980s Washington, D.C. We’ll keep an eye out for Ronald Reagan, Marion Barry, some Go-Go, shoulder pads, (Ed. note: Mr. T, perhaps?) and at least one shot of the Smithsonian, if we’re lucky.

“Defund the Police” Was a Rallying Cry in 2020. Minneapolis Is About to Vote on What That Means.

Texas Women Prisoners Can Learn How to Type and Cook. Men Can Get a Master’s.

As Hurricane Ida Strands Thousands, the Police Would Rather Focus on “Anti-Looting” Patrols

The Supreme Court Said No More Life Without Parole for Kids. Why Is Antonio Espree One of the Few to Get Out of Prison?