Spread the love      Tweet    West Hollywood, CA — As the family and friends of Gemmel Moore, 26, continue… 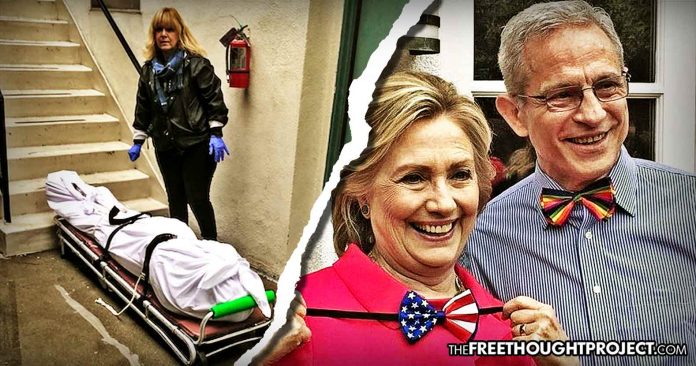 West Hollywood, CA — As the family and friends of Gemmel Moore, 26, continue to fight the uphill battle to bring the man they say is responsible for his death to justice, yet another man has died in the same home in the company of the same man. As TFTP reported last year, Moore was found dead at prominent Democratic donor Ed Buck’s home in 2017 and now, another black man was found dead on Monday.

Not surprisingly, the media coverage on the incident is all but non-existent.

I’m quoting from Jasmyne Cannick’s website. She’s delved deep into the abyss of this man’s depravity
Only a prominent Democrat contributor could get away with serial abuse and drugging of young gay black men and have virtually no mainstream media coveragehttps://t.co/mE21OYxqeK

After finding Moore dead in Buck’s apartment in 2017, along with piles methamphetamine, police refused to charge Moore with a crime. Now, the same thing appears to be happening again.

Naturally, Buck’s attorney, Seymour Amster, described the death of the unknown man on Monday as an accidental overdose and said Buck is cooperating with investigators. “From what I know, it was an old friend who died of an accidental overdose, and, unfortunately, we believe that the substance was ingested at some place other than the apartment,” Amster told the Los Angeles Times. “The person came over intoxicated.”

“He’s shaken up,” Amster said of Buck. “All indications are he had nothing to do with this tragedy.”

As Wehoville reports, Jasmyne Cannick, a communications and public affairs strategist who has worked with Gemmel Moore’s family, has announced that there will be a rally at 7 p.m. tonight at 1234 Laurel Ave., the home of Ed Buck, to call on the Los Angeles Sheriff’s Department to arrest Buck and for District Attorney Jackie Lacey to “prosecute him for murder after another young Black gay man was found dead in his West Hollywood apartment of an apparent overdose.”

As TFTP reported at the time, on July 27, 2017, Moore’s body was discovered inside the West Hollywood apartment of Buck. Buck is a well connected and extremely wealthy political activist who gives massive amounts of money to the Democratic party. His influence is vast as he’s given hundreds of thousands to a slew of powerful Democrats including Clinton, Barack Obama, Los Angeles Mayor Eric Garcetti, Los Angeles County District Attorney Jackie Lacey and a variety of state and local organizations in California—which likely explains the reason he’s yet to be charged with any crime.

Eric Bauman, chair of the Los Angeles County Democratic Party and California Democratic Party who claims to have been falsely accused of “engaging in inappropriate behavior with 14- and 16-year-old boys.” is seen here with Buck and Adam Schiff pic.twitter.com/ephueOHV2k

According to a Los Angeles County coroner’s report, police and paramedics found Moore naked on a mattress in Buck’s living room with a “male pornography movie playing on the television.” A spokesman for the coroner’s office, Ed Winter, said Buck was inside his Laurel Avenue home at the time of Moore’s death and that drug paraphernalia was recovered from the scene.

Even if we ignore the fact that there was a dead prostitute in his bed, the drugs found on the scene alone should’ve been enough to warrant charges as the multiple plastic bags would land anyone else with not only possession charges but intent to distribute. But there have been none.

According to FOX, the Los Angeles County Coroner’s office initially ruled the death an accidental methamphetamine overdose. But the Los Angeles County Sheriff’s Office Homicide Bureau on Aug. 14 announced they would investigate if there is any criminal culpability, after Moore’s family and friends disputed the initial finding.

However, the L.A. County District Attorney’s Office would eventually decline to prosecute Buck saying the evidence is “insufficient to prove beyond a reasonable doubt that (Buck) is responsible for the death of Gemmel Moore.”

While it is entirely possible that Moore was simply staying at Buck’s house as a ‘friend’ and accidentally overdosed while there, the following information paints a far more ominous picture.

One of the witnesses interviewed by police said Moore told her that someone whose name is conveniently redacted tied him up “over a year ago” and “held him against his will at the residence in West Hollywood.”

But that’s not all. Moore also kept a journal in which he described in graphic detail how Buck forced him to do meth and got him addicted.

“I honestly don’t know what to do. I’ve become addicted to drugs and the worst one at that,” Moore’s journal reads. “Ed Buck is the one to thank. He gave me my first injection of crystal meth it was very painful, but after all the troubles, I became addicted…”

Moore also seemed to think that Buck was trying to kill him which is why he wrote the following sentence in his journal.

The damning information against Buck, however, according to his attorney amounts to nothing.

“There’s nothing there. As we always stated, this was an accidental overdose that Ed Buck had nothing to do with and it’s a tragedy,” Amster, told Fox News. “The coroner has not changed his opinion from an accidental death. Until that happens, and that’s not going to happen, we’re done.”

However, on top of the fact that there is documented evidence of heavy drug use at his residence, illegal prostitution, witness accounts of kidnapping, and Moore predicting Ed Buck would kill him, other witnesses have come forward noting that Buck has a history of doing this to young black men.

As FOX reports, according to Jasmyne Cannick, an advocate for Moore’s family, a number of other gay black men have claimed Buck would invite them to his house, then pay them several hundred dollars to take drugs.

The website has even posted evidence showing that Buck is apparently still out recruiting young black men to bring them to his home and give them drugs. The video below shows another young black man show up as police are investigating, appearing to imply that Buck planned to keep on partying after Moore had just died in his house.

Whether or not this well-connected millionaire democratic donor will ever be brought to justice, however, remains up in the air.

Damar Love (pseudonym) was a commercial sex worker who details his last visit to Ed Buck’s house:
“I was at Ed’s house and I fell asleep. I woke up because I felt a prick on my arm. My arm was tied down and it was red.”

As for Moore’s mother, she remains resolute in her mission which she says is “Getting Ed Buck off the streets and prosecuted to the fullest extent of the law for preying on and taking advantage of my son and others like him.”

Hopefully, this most recent case leads to an actual investigation and trial.