Politicians often find themselves hoping voters will forget their past promises, but one pro-remain group has decided to remind the… 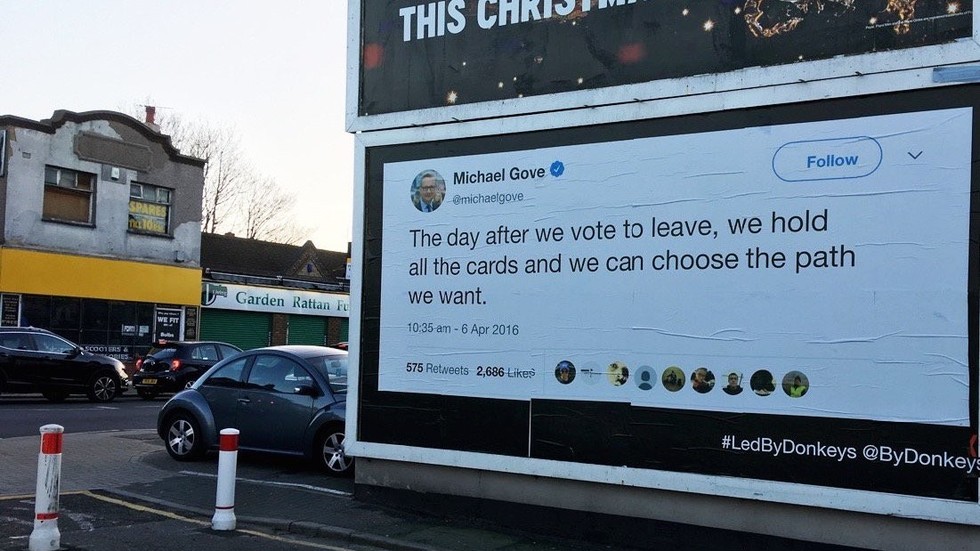 Politicians often find themselves hoping voters will forget their past promises, but one pro-remain group has decided to remind the public of some of the UK officials’ most embarrassing Brexit-related pronouncements.

The group, calling itself Led By Donkeys, claimed responsibility for the sudden mysterious appearance of billboards which trolled pro-Brexit politicians by displaying awkward past tweets which didn’t exactly age well.

First for the billboard treatment was former Prime Minister David Cameron, with the group posting a 2015 tweet in which he warned Britons that if they voted for Labour in the general election, that then-Labour leader Ed Miliband would deliver “chaos” — the irony of course being that Cameron called the referendum on Brexit which led to the worst chaos and political crisis Britain has dealt with in decades.

Posting images of the Cameron billboard on Twitter, Led By Donkeys, which managed to rack up more than 12,000 followers in a matter of days, said that the goal was to “record for posterity the prophetic words of our leaders.”

Next up was a 2016 tweet from former Brexit Secretary David Davis, in which he promised that there would be “no downside” to Brexit and only “considerable upside.”

Another billboard trolled hardline pro-Brexit Tory MP Jacob Rees Mogg, who tweeted in 2011 during discussions about renegotiating the UK’s position within the EU that two referendums — with one happening after the potential renegotiation — would “make sense.” The Rees Mogg of 2019 definitely does not think a second Brexit referendum would make any sense, however, despite the principle being quite similar.

The group also trolled UK Prime Minister Theresa May herself, who was once a member of the anti-Brexit camp and warned shortly before the referendum in 2016 that “remaining in the European Union means we will be more secure from crime and terrorism.”

A spokesperson for the group told the Guardian that with the news cycle these days being so fast-paced, it’s easy to forget what politicians once said. “If they want us to trust their judgment as we enter the choppy waters of Brexit, it’s right that we remind ourselves of their record,” they said.

Led By Donkeys has been asking their followers to contribute to the campaign by tweeting suggestions for future billboards and then to vote on the options — and there has been no shortage of suggestions flowing in.

Please reply with your suggestions for next deployment (and desired locations). Is it Fox and ‘easiest deal in human history’? Maybe Davis and ‘no downside to Brexit, only considerable upsides’. Get involved. #LedByDonkeys#TweetsYouCantDelete

Please can we have this one? My status is going to be changed (that is if my app for settled status is accepted once I pay and apply to continue living in my own home). Not scaremongering. @InLimboBrexithttps://t.co/g8yODqcQ0q

Daniel Hannan “Absolutely nobody is talking about threatening our place in the single market.”

Owen Patterson "Only a madman would actually leave the Market"

Boris – "I'd vote to stay in the Single Market"

Environment Secretary Michael Gove is one of the latest to be trolled, with the group highlighting a past tweet in which he claimed that “the day after we vote to leave [the EU], we hold all the cards and we can choose the path we want” — a prediction which didn’t quite turn out the way he expected.