Frothing at the sash A 'Men's Magazine', so indecent, that we are unable to print a picture from it, goes… 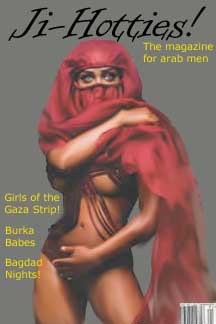 Frothing at the sash

A 'Men's Magazine', so indecent, that we are unable to print a picture from it, goes on sale in the Persian Gulf from today.

Instead, we have provided a picture of another magazine of a similar ilk, which is also geared towards Arabic men.

The new magazine, 'al-Porno', contains images of Arabic ladies in various states of undress, in selective unladylike poses, and 'liaising' with both men, women, and farmyard animals. There is also a section featuring women wearing torn, shredded, and virtually non-existent burqas. It's shocking.

Advance copies of the magazine have already been labeled 'disgraceful', 'disgusting', and 'despicable', as well as 'delightful'.

One of the raunchier sections of the magazine is headed:

"FROTHING AT THE SASH".

The magazine's publication is a major departure from the traditionally-held view of women within the Islamic world, and is bound to raise a few eyebrows amongst the Moslem community worldwide.