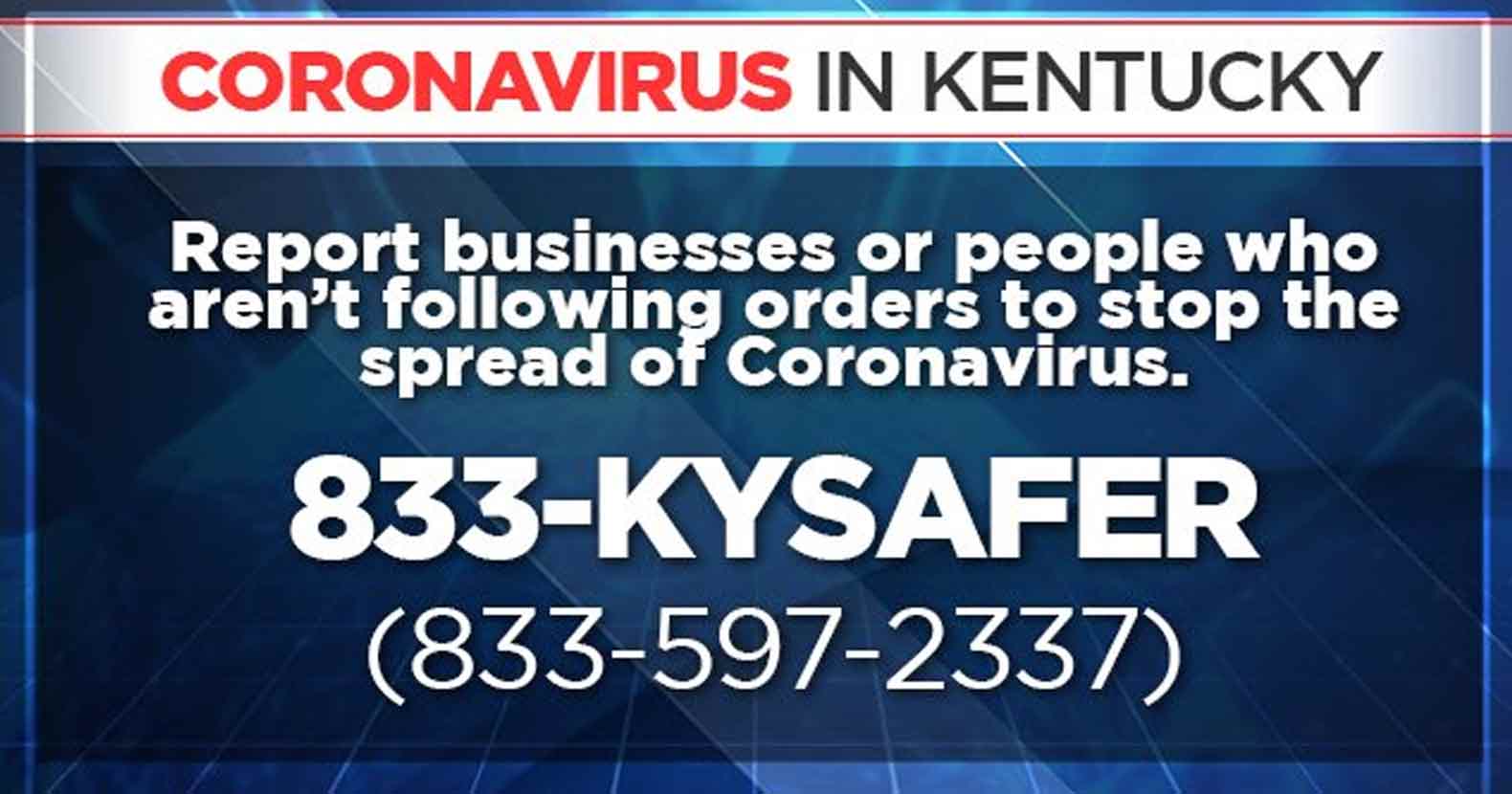 On Monday, Kentucky Governor Beshear announced a COVID-19 snitch hotline that allows citizens to report people and businesses who they think may be disobeying the state’s social distancing mandates. The COVID-19 reporting hotline is 1-833-KY-SAFER or (833)-597-2337.

The governor’s decision drew immediate ire from Kentucky Congressman Thomas Massie who compared it to a chapter out of George Orwell’s 1984.

According to the governor, the hotline will be open from 7:30 a.m. to 9 p.m. Residents can leave messages after hours to make sure all reports are recorded. All calls will be answered by a Kentucky Labor Cabinet employee, according to the report.

In the metro Louisville area, citizens are urged to call 311 to report their neighbors who may not be complying with social distancing policies.

Apparently the KYSAFER hotline was inundated with so many calls on Tuesday, that Congressman Massie’s attempt to contact them went to a busy signal. There are that many citizens out there waiting to tell on their neighbor for an alleged violation.

“All operators are currently serving other snitches.” pic.twitter.com/OrJBCne3sL

It is important to point out that no one here at the Free Thought Project is telling people not to practice social distancing. There are multiple experts in the field who have put out utterly shocking data which shows the potential for COVID-19 to reach catastrophic proportions if these immediate actions are not taken.

Flattening the curve can potentially save millions of lives and we should take every necessary precaution as individuals to make sure that it happens to the best of our ability. People need to stay away from others, avoid public spaces, and do everything they can to avoid spreading this pandemic.

But this hotline goes farther than merely attempting to flatten the curve. This perpetuates the tyrannical and despotic “see something, say something” society that flourished after 911 in which innocent people found themselves subject to the police state simply because they had a paranoid neighbor.

As the Free Thought Project reported, Barbecue Betty began the summer of the snitches in 2018 as neighbors turned in fellow neighbors to authorities for selling water, lemonade, or for simply being black at your own apartment complex pool. This see something say something society is the wet dream of the authoritarian and providing a hotline for this outlet will undoubtedly do more harm than good. This hotline will be fuel to the fire that is Barbecue Betty.

People are literally calling 911 to report their own neighbors for coughing and now the state of Kentucky is asking them to snitch on a whole slew of other alleged social distancing offenses.

According to a report in the Desert Sun, cops say ” they can’t ignore such calls or discount them as paranoia, hypochondria or fakery. They must respond even when every other public entity adopts “social distancing” in order to reduce possible coronavirus transmission.”

This hotline will likely make it harder for cops to do their jobs as it encourages every Pool Patrol Paula, Permit Patty, and Barbecue Betty in America to grab their phone and report someone for what may or may not be a violation. Judging from the replies to Thomas Massie’s tweets, there are a lot of people out there who want to lock you in a cage for trying to walk your dog during this pandemic.

In fact, California Peace Officers Association President Neil Gallucci, who is also chief of the Carlsbad (Calif.) Police Department, said that these erroneous calls could have the potential to thwart actual emergencies or other real calls for service.

“If that happens enough, we worry about calls for service,” Gallucci said. ”We’re prepared to deal with issues that come up, but it’s a concern chiefs worry about.”

As Oregon Decriminalizes ALL Illegal Substances, Drugs are the Real Winner of 2020 Election

Yes, Election Fraud is Real. And its a Longstanding Tradition on Both Sides of the Aisle