Clustered among the landmarks of downtown Los Angeles are an awful lot of buildings dedicated to imprisoning people. The Twin Towers, which… 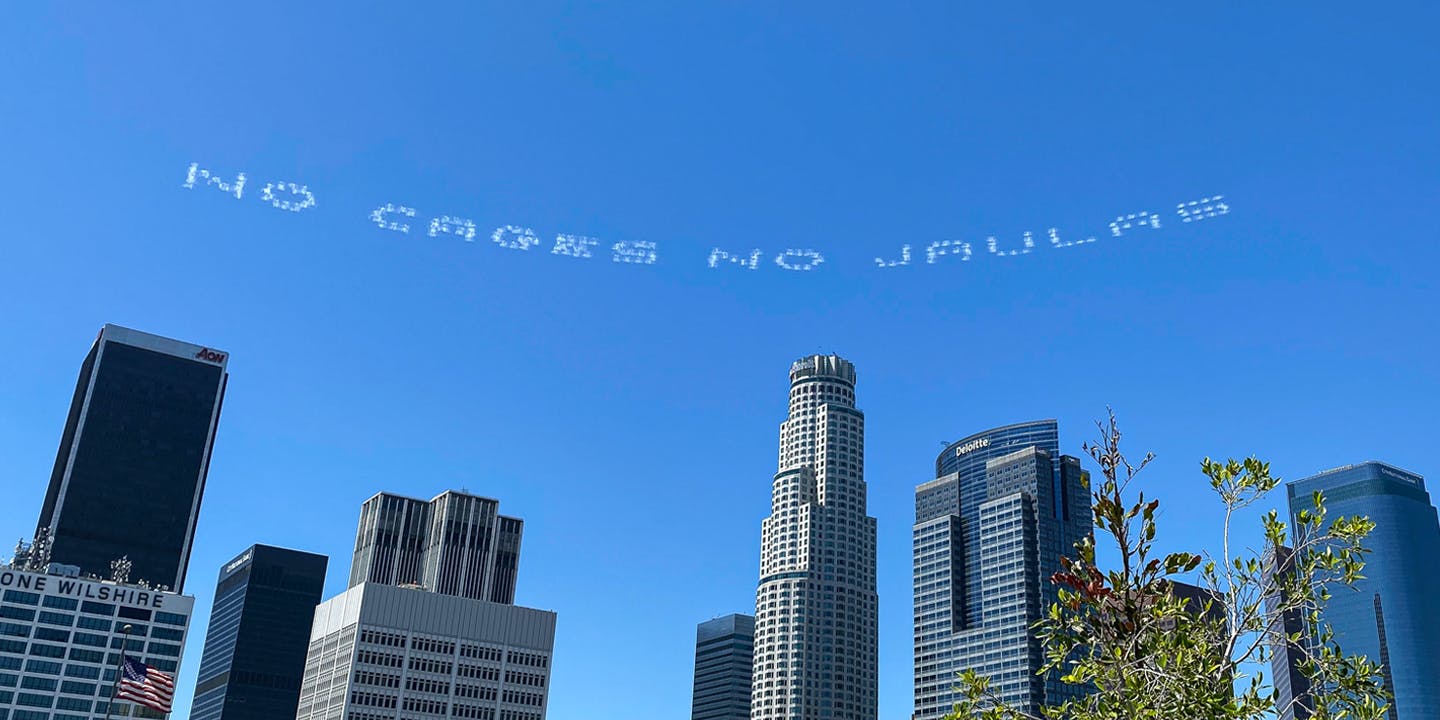 Clustered among the landmarks of downtown Los Angeles are an awful lot of buildings dedicated to imprisoning people. The Twin Towers, which claims the dubious distinction of being the world’s largest jail, sits next to Men’s Central, and nearby there’s the Metropolitan Detention Center, a federal facility, as well as the Immigration and Customs Enforcement (ICE) field office and the immigration courts.

Yesterday afternoon, a constellation of words appeared above these edifices, visible for miles around the city. “CARE NOT CAGES,” “CHINGA TU MIGRA,” “ABOLITION NOW,” and other phrases emerged in a circle behind a fleet of planes. The skywriting was part of a nationwide artist intervention entitled “In Plain Sight,” designed to draw attention to the hundreds of places in communities across the country where immigrants and others are detained each day. More messages will show up over different sites today and tomorrow.

Above Los Angeles, the planes were behind schedule. Earlier in the day, members of local immigrant rights groups gathered with artist Beatriz Cortez on the edge of MacArthur Park to chalk “DEFUND ICE” in candy colors in the middle of a street. A marimba band played, the day grew hot, and eventually most everyone went home to wait to see Cortez’s own phrase, “NO CAGES NO JAULAS,” suspended over the immigration court downtown.

Political messages in the sky seem as natural as a sunny day in Los Angeles right now; when I went to the beach for the first time in months in early June, a little plane buzzed over, dragging a banner declaring “Black Lives Matter.” Since the killing of George Floyd, all-caps slogans protesting police violence and affirming Black lives are everywhere — in windows, taped to windshields, spray-painted on toppled statues, embroidered onto face masks,  hung on sheets dangled from overpasses. Of course this kind of mushrooming is typical at heated moments of protest, but the signs have a different resonance now, at a time when we are muted by our masks, kept indoors by the virus. They become a way of saying: I am there with you (a message just as quickly coopted by mayors authorizing murals and brands commissioning artwork for their boarded-up shop windows).

“To stand in solidarity with folks who were saying they want to abolish ICE meant that we also had to engage with the history of violence and incarceration in the U.S.”

In that way, “In Plain Sight” fits right into the moment, and in-person gatherings like Cortez’s highlight, as she put it, “the Central American groups that have been fighting for these things for 40 years.”

“Rather than being an artwork about immigration, this is an artwork that seeks to serve and amplify the on-the-ground work that’s been done by our partner organizations,” said Cassils, who founded the project along with another Los Angeles based artist, rafa esparza. “In Plain Sight” was born out of a group text with artists who had been making work to protest the separation of families at the border and other abuses, but the idea to use skywriting came to Cassils when Cassils had just returned from Europe and saw a plane spell out “Happy 4th” last July, a sight that evoked for them a “militaristic display of patriotism.”

“What would it be like,” they said, “to usurp and reclaim this idea of what is it to be patriotic on the 4th of July, in this country, in this moment?”

The vaporous letters of skywriting, at once ephemeral and numinous and pleasantly kitschy, have appealed to artists for decades, though the expense makes its use fairly rare. (Technically, what “In Plain Sight” uses is not skywriting — one plane looping around to make alphabet shapes — but skytyping, in which several planes fly in formation, guided by a computer to puff out digital dots in the form of letters.)

The technique has been used for advertising since the 1920s, and was popularized by brands like Pepsi, which had its own fleet of whirling messengers. But Instagram has made skywriting exponentially more valuable, since the temporary display lives on in every passerby’s post, and the press materials for “In Plain Sight” stressed its ’grammable nature — like much public art, the project merges commercial tactics with artistic intent in the name of raising awareness. Cassils had been doing some work for Puma, and was struck by the enormous amount of money that went toward a single ad campaign for shoes.

“As performance artists, we’re dealing with very little means,” they said. “But after seeing the audacity of the money spent on shoes, and learning abut the insanity of the problem [of immigration detention] and the scope and scale, we thought, we need to make this big. We approached the skytyping corporation here in LA and we asked them, ‘what’s the biggest gig you’ve ever done?’, and they said, ‘well we’ve done a nationwide campaign of 80 messages nationwide, for Geico.’ So we decided we would go for that.”

The often mysterious phrases that emanate from the tails of the planes are followed by the hashtag #xmap, directing people to a website showing the hundreds of immigration detention facilities across the country and offering connections to local immigrant rights and other groups organizing to end detention.

“To stand in solidarity with folks who were saying they want to abolish ICE meant that we also had to engage with the history of violence and incarceration in the U.S.,” said esparza. That meant inviting messages from Black and indigenous artists and activists, as well as Japanese-American artists whose relatives had been in internment camps in World War II. After George Floyd’s murder, he said, “to stand in solidarity with the movement for black lives, I wouldn’t call it a pivot, we just always had it.”

Some of the messages are purposefully enigmatic or elegiac, like the name of Carlos Ernesto Escobar Mejia, the first person to die of Covid-19 in immigration custody, chosen by Dread Scott to be flown over the Statue of Liberty, while over the Metropolitan Detention Center in Brooklyn, another artist will write Mejia’s sister’s words about his death: “My pain is so big.” esparza collaborated with Tijuana-based artists for three messages in Spanish near the border: “NO TE RINDAS” (don’t give up); “LA FRONTERA NOS CRUZO” (the border crossed us); and “SOY NUBE DE ESPERANZA” (I am a cloud of hope).

Others are crystal clear: the many variations on “Abolish ICE,” or “YER TAX $ CAGE KIDS” over the San Diego ICE field office.

That urgency is needed. Over 22,800 people are currently in ICE custody. While that’s many thousands less than it was before the coronavirus struck — in 2019, the average daily detained population was about 50,000 — in many cases, it’s taken lawsuits to force the agency to free people. Just last week, a judge ordered the government to release children who had been held for weeks with their parents.

“The family residential centers are on fire and there is no more time for half measures,” the judge wrote.

Fear ripped through immigrant detention centers as the virus spread, with people inside desperately protesting unsanitary and crowded conditions and lack of medical attention. Guards met protests with retaliation, including pepper-spray, solitary confinement, and transfers to different facilities. Recently, cases in ICE detention have jumped  — a facility in Eloy, Arizona, owned and operated by the private contractor CoreCivic, reported 222 confirmed infections last week. The message over Eloy? A single word: “RELEASE.”

Navy Dismisses Captain Who Sounded The Alarm on Coronavirus, Signaling A Willingness to Stifle Dissent