On Wednesday a federal court in Washington, D.C., heard the first major challenge to the Trump administration’s policy on Guantánamo… 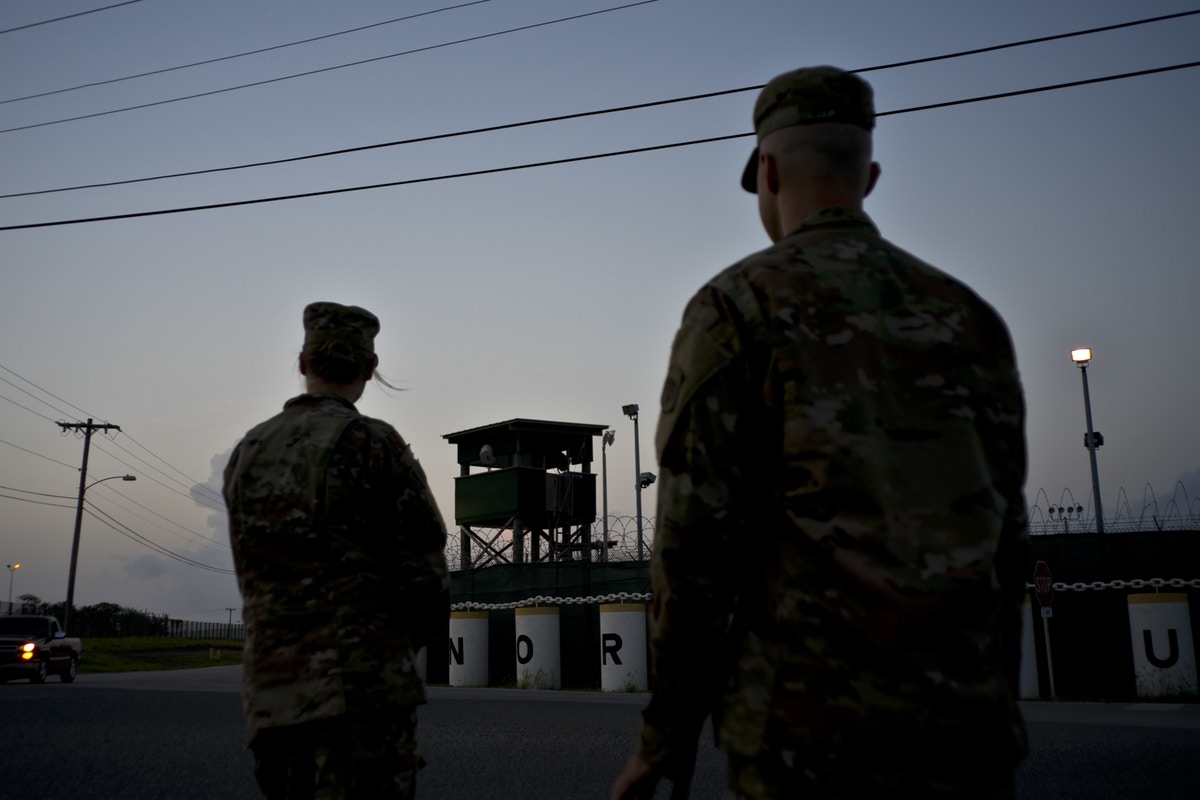 On Wednesday a federal court in Washington, D.C., heard the first major challenge to the Trump administration’s policy on Guantánamo Bay — a case arguing against the ongoing detention of eight of the 40 Muslim men still left at the island prison. The judge’s decision in the case could impact any future attempt to bring detainees to the detention center and torture site, and become a judgment on the United States’s endless war on terror.

Twenty-six prisoners at Guantánamo remain detained without charge or trial, including the eight men represented in court Wednesday, who have been at Guantánamo between 10 and 16 years. Two of them have been cleared for release by a government review panel. Lawyers from the Center for Constitutional Rights, along with other attorneys, are challenging the prisoners’ detention both as a violation of due process and also under the laws of war as dictated by the authorization for the use of military force, or AUMF.

Passed by Congress in 2001, the AUMF granted the executive branch license to “use all necessary and appropriate force” against individuals or groups responsible for the 9/11 attacks or those who helped them. Critics say the law is now being stretched beyond recognition to legalize military action around the globe, including against groups that did not exist in 2001.

While the government originally used the broad powers granted by the AUMF to justify the detention of their clients, CCR attorneys argued that this authority has since “unraveled.” Under the AUMF, limited detention was justified for the narrow purpose of preventing the return of the detainees to the battlefield. Calling today’s war on terror an “amorphous, interminable morass” and a “conflict disconnected from reality,” CCR urged the court to recognize the vastly different landscape from when the AUMF was passed by Congress.

The government countered that as long as operations continue against Al Qaeda and the Taliban in Afghanistan, the original theater of the war on terror, the authority underpinning the AUMF still holds. When Judge Thomas Hogan asked if, in the government’s view, the war could last 100 years, Justice Department attorney Ronald Wiltsie said, “Yes, we could hold them for 100 years if the conflict lasts 100 years.”

Baher Azmy of CCR, in an interview with The Intercept, dismissed the idea that these detainees would return to the battlefield. “No one is going to be returned to Afghanistan,” he said. “For example, two of the cleared petitioners were set to be released to Morocco and Saudi Arabia, under security arrangements or into custody.”

Azmy also pointed out that the government had submitted to the court assessments from generals who described how they have “constrained Al Qaeda’s effectiveness” and now largely preside over counternarcotics operations against the Taliban, who have “lost their ideological underpinning.” Though the U.S. remains engaged in combat operations in Afghanistan, it ended Operation Enduring Freedom, which launched the war on terror in October 2001, at the end of 2014.

While Presidents Barack Obama and George W. Bush released nearly 750 men over the course of their terms, only one man, Ahmed al-Darbi, has been transferred out of Guantánamo during President Donald Trump’s tenure, based on arrangements made after he pled guilty to war crimes in 2014. Though his clients have all renounced violence, Azmy asked the court whether they would likewise need to confess to war crimes in order to leave the prison.

The lawyers for the detainees also argued that the Trump administration has made a blanket decision not to transfer prisoners out of Guantánamo – in line with comments the president made before entering office. Though Trump’s January executive order on the prison granted Defense Secretary Jim Mattis the power to transfer detainees, Mattis admitted last month in a CNN interview that he was “not working on that issue.”

“These detentions are, in general, not about real threat. … They’re arbitrary and … they’re just being held out of [Trump’s] animus and punishment.”

Pardiss Kebriaei, a CCR staff attorney who appeared on behalf of the detainees, said before the hearing that “Trump’s statements and his actions … demonstrate that these detentions are, in general, not about real threat, but that they’re arbitrary and that they’re just being held out of his animus and punishment.”

The lawyers filed the habeas case in January, on the 16th anniversary of the prison’s opening. In the months since, the White House announced new criteria drawn up by the Defense Department to transfer new detainees to Guantánamo if they “present a continuing, significant threat to the security of the United States.” Prison guards at the island base recently drilled to practice receiving a new detainee, and proposals for the first permanent barracks and a hospice wing for the aging prison population are under discussion. While Obama never fulfilled his campaign promise to close Guantánamo, he remained nominally committed to it throughout his term. Under Trump, by contrast, a commander at Joint Task Force Guantánamo recently told reporters, “We’re going to be enduring and stick around for a while.”

Any attempt to bring new prisoners — such as Islamic State detainees currently held by U.S.-allied forces in Syria and Iraq — to the base would likely invite legal challenges, and Hogan’s judgment in this case could provide an important referendum on such transfers. Hogan expressed sympathy with the detainees at Guantánamo, noting that they had already spent a long time in prison. He could order them released. But he also indicated that he may not offer any bold pronouncements that could contradict or reinterpret previous rulings on the president’s war powers — including those shaped by Trump’s Supreme Court nominee Brett Kavanaugh.

MintCast Interviews Doug Valentine, Author of The Phoenix Program and The CIA as Organized Crime