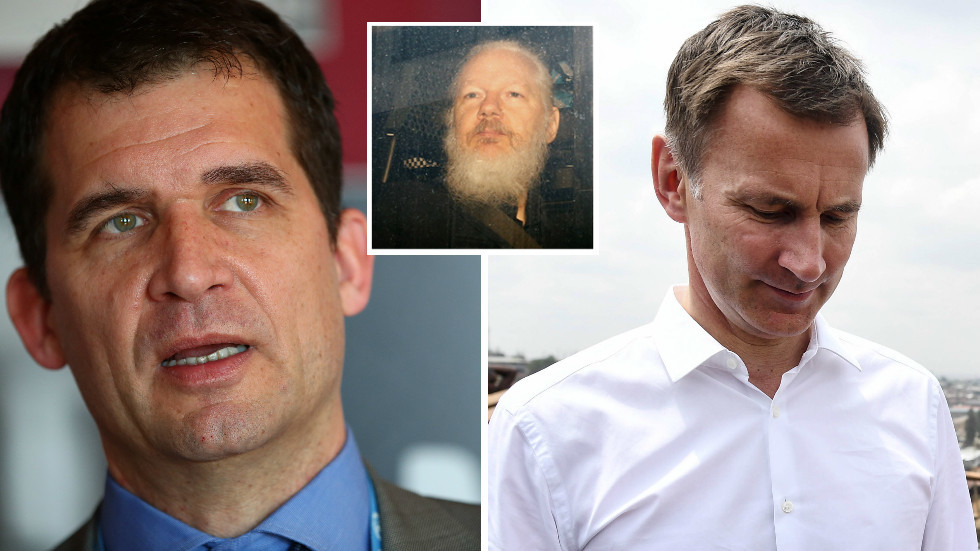 “This is wrong. Assange chose to hide in the embassy and was always free to leave and face justice,” British Secretary of State for Foreign Affairs Hunt tweeted less than an hour after Melzer gave his statement on Assange’s condition, insinuating that Assange’s time in the Ecuadorian embassy in London was somehow voluntary.

This is wrong. Assange chose to hide in the embassy and was always free to leave and face justice. The UN Special Rapporteur should allow British courts to make their judgements without his interference or inflammatory accusations. https://t.co/s0UtMN5pU0

“The UN Special Rapporteur should allow British courts to make their judgments without his interference or inflammatory accusations,” Hunt added.

Melzer quickly fired back in a rather creative fashion, saying: “With all due respect, Sir: Mr Assange was about as ‘free to leave’ as someone sitting on a rubber boat in a sharkpool.” He also reiterated comments that the British justice system had failed to show the “impartiality and objectivity required by the rule of law.”

With all due respect, Sir: Mr Assange was about as „free to leave“ as a someone sitting on a rubberboat in a sharkpool. As detailed in my formal letter to you, so far, UK courts have not shown the impartiality and objectivity required by the rule of law.

Melzer drew on his two decades’ experience working with prisoners of war and political prisoners when assessing Assange’s deteriorating mental state, which was further exacerbated by a lack of adequate medical care for several years.

The UN special rapporteur on torture also stated that Assange appeared agitated, stressed and was unable to cope with the complexities of his legal case, for which he failed to testify via video link Thursday citing health issues.

Melzer expressed concern about the potential for a “politicized show trial” should Assange be extradited to the US to face a slew of charges under the Espionage Act, following what he dubbed “persecution” not “prosecution” at the hands of the British legal system. He alleged that “dozens if not hundreds of individuals” including judges and senior politicians had defamed Assange, though he did not name any specifically.

TikTok: Trump says he will ban Chinese video app in the US