Matt Schlapp, the chair of the American Conservative Union, kicked off the Conservative Political Action Conference on Wednesday by stating…

Matt Schlapp, the chair of the American Conservative Union, kicked off the Conservative Political Action Conference on Wednesday by stating explicitly the goal of the four-day event: to dissect and understand the tactics used by progressive activists, in order to effectively push back against “creeping socialism.”

CPAC, as the annual event is known, has long been a place for debate around conservative ideas. This year, however, the speakers — avowed supporters of President Donald Trump — spent much more time fear-mongering about a  socialist takeover of the United States and counting the losses they suffered in the 2018 elections.

Schlapp’s comments came during an “activism bootcamp” session titled, “How the Left Does It: Money, People, Technology & How They Sell Socialism with a Smile.” The panel discussion featured Chris Carr, a veteran GOP strategist and political director for Trump’s re-election campaign; Bill Meierling of the American Legislative Exchange Council; and Katrina Pierson, an adviser to Trump 2020.

Meierling, speaking to a packed room, said that conservatives ought to learn from the left’s successes in winning back political power. Colorado, which in November achieved a Democratic trifecta — unified control of the state House, Senate, and governorship — serves as a cautionary tale, he said. The state gradually shifted from red to purple to blue thanks to the efforts of liberal activists, who created a movement outside of the Democratic Party, started new non-profit organizations, and “engaged with unions as the foot soldiers to door-knock,” Meierling said.

Meierling pointed specifically to gerrymandering as a tactic that can be used to win state-level seats, particularly in states whose legislative chambers have the power to redraw congressional district maps, a tactic that compounds the power of the party in control.

If anything, progressives’ successes came after borrowing from the GOP playbook. During President Barack Obama’s eight years in office, Republicans flipped nearly 1,000 state-level seats. Ahead of the 2018 midterm elections, Democrats ramped up efforts to win back control of state legislatures. Democrats also won back control of the U.S. House of Representatives — with a record-shattering margin of victory — due in large part to the grassroots organizing on the ground.

The Red Scare continued on day two of the conference, with a particular focus on democratic socialist Rep. Alexandria Ocasio-Cortez and her signature policy, the Green New Deal. The New York representative’s resolution, which she introduced with Sen. Ed Markey, lays out a decade-long plan envisioning a dramatic reduction of greenhouse gas emissions, the creation of millions of “good, high-wage jobs,” and an eventual goal of 100 percent clean electricity. At CPAC, it was portrayed as a communist policy that, in the words of Trump’s top economic adviser, Larry Kudlow, “would literally destroy the economy.”

On Thursday, Schlapp moderated a discussion with Reps. Mark Meadows, R-N.C., and Jim Jordan, R-Ohio., called “Marketing Marxism: There’s Nothing New about the Green New Deal.” Though the panel was billed as a discussion about the socialist ideology behind the Green New Deal, the trio didn’t get into the key provisions of the resolution, the political and economic theories of Karl Marx, or how the two relate to each other. Rather, Meadows and Jordan railed against Ocasio-Cortez, this week’s House Oversight and Reform Committee hearing with former Trump lawyer Michael Cohen, and the Democratic Party’s overall leftward shift.

“They cheer on Kaepernick when he disrespects the flag,” Jordan said, referring to the football player whose protest of police brutality got him effectively blackballed by the NFL. “They embrace Cuomo – [New York] Gov. [Andrew] Cuomo – when he says America was never that great. And they also embrace [Rep.] Maxine Waters when she says, ‘Go out and harass anybody who supports the president.’”

As other examples of the left’s radical new positions, Jordan also mentioned Ocasio-Cortez’s proposal for a 70 percent marginal tax rate and the movement to abolish the U.S. Immigration and Customs Enforcement agency.

In a separate session, Sebastian Gorka, a conservative commentator who briefly worked in the Trump administration, took condemnation of the Green New Deal to the next level. “They want to take your pick-up truck. They want to take away your hamburger. This is what Stalin dreamt about but never achieved,” Gorka said in a bit that almost instantly became a meme. The audience responded with cheers and chants of “U-S-A!” 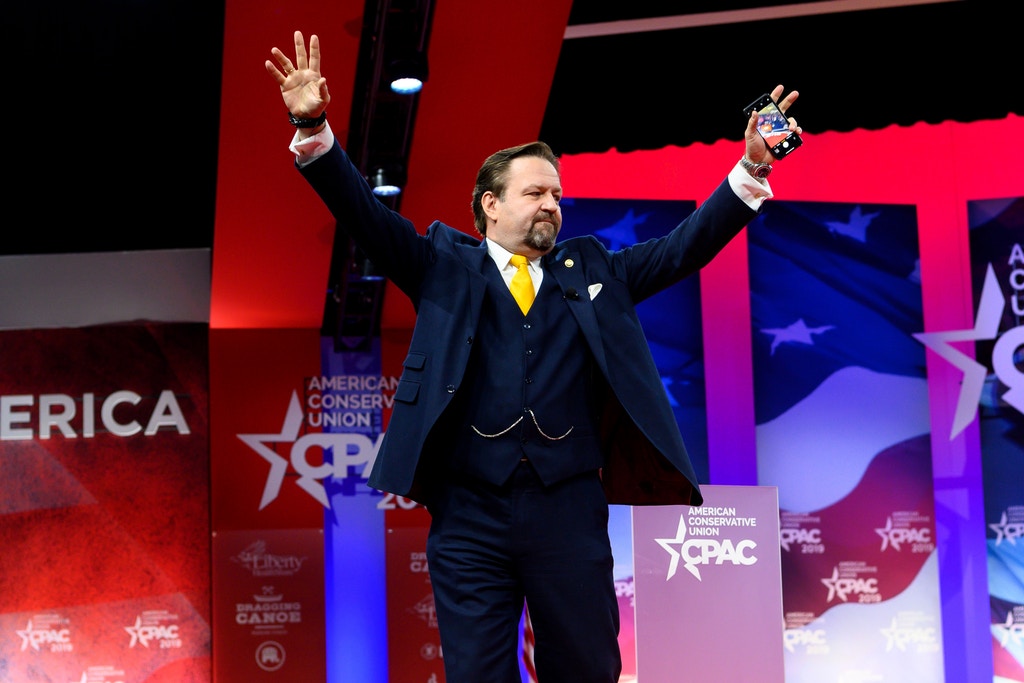 Gorka also stressed the threat of creeping socialism. He warned his audience that younger generations are growing more favorable to the political ideology, citing a poll conducted by the Victims of Communism Memorial Foundation that found 52 percent of millennials “would like to live in a socialist or communist America.”

You don’t have to take Gorka’s word for it. A 2016 Harvard University poll showed that a majority of millennials reject capitalism. Fifty-one percent of young adults from age 18 to 29 said they didn’t support capitalism, while 42 percent supported it.

“That is why 40, four-zero, Democrat candidates in the last midterm election called themselves socialists,” Gorka said. “That is why Alexandria Ocasio-Cortez has introduced the Green New Deal, which is, which is — remember this one, use it — it’s a watermelon. Green on the outside, deep, deep red communist on the inside.”

Republicans have used “socialist” as a smear against Democrats for generations, and dialed it up a notch with Obama. Now, with two actual democratic socialists in the House of Representatives and another one a top-tier 2020 candidate for president, the charge has lost some of its electricity.

It was Sen. Bernie Sanders’s openly socialist presidential campaign in 2016, particularly his call for a mass movement or “political revolution,” that reinvigorated American interest in democratic socialism. His campaign contributed to the explosive expansion of the Democratic Socialists of America, whose membership has increased from roughly 7,000 members to more than 55,000 since the election of Trump. Ocasio-Cortez and Rep. Rashida Tlaib, D-Mich., are registered DSA members, validating the organization as a real political force. 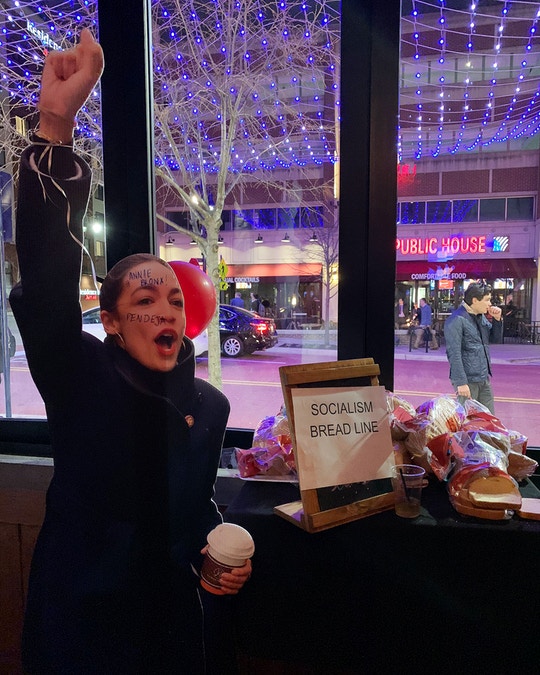 A cardboard cut-out of Alexandria Ocasio-Cortez at a party hosted by Turning Point USA on Feb. 28, 2019.

Despite the bizarre accusations and lies about Democratic policies, there were still glimmers of truth in many of the CPAC speeches: Democratic socialism is growing, a majority of Americans do support policies like free college tuition and Medicare for All, and Ocasio-Cortez does have the uncanny ability to drive the conversation and push her colleagues left.

At a Thursday night party hosted by Turning Point USA, a far-right youth group most known for filming its members wearing diapers on a college campus, people took pictures with a cardboard cut-out of Ocasio-Cortez that had “pendeja,” a Spanish slang word that translates loosely to “dumbass,” written in pen on her face. Sen. Ted Cruz, R-Tex., who attended along with Donald Trump, Jr., and Texas Rep. Dan Crenshaw, led the partygoers in a chant that was, by that point, predictable: “Socialism sucks!”