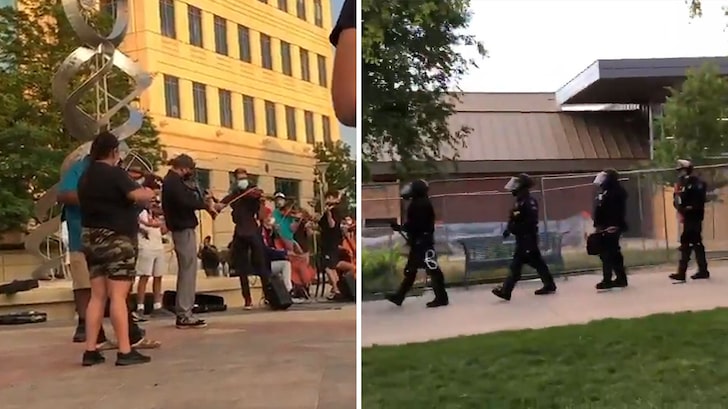 Cops in Aurora, CO came in like a military unit to forcibly remove — not to mention pepper spray — peaceful protesters who were watching a violin performance to honor Elijah McClain.

This went down Saturday in City Center Park, where a musical vigil had been planned to pay respects to Elijah — who died while in custody of Aurora PD last year — which was incredibly symbolic, seeing how Elijah played violin himself. At one point, the police had seen enough.

In the video, captured by a vigilant bystander, you can see the jarring juxtaposition play out live on camera. At first, you hear the violinists — some of whom are said to have been underage — beautifully playing in unison, and the next minute … cops are storming the place.

The woman recording can be heard — along with others — openly yelling “No!” at what’s about to happen next … forcible removal and literally pushing the protesters out of the park, while shutting down the performance. Pepper spray started getting dispersed at one point too.

As police in riot gear were spraying protesters with pepper spray and using batons to push them back at the #ElijahMcClain protest in Aurora today, this man began playing the violin. One of the most surreal scenes I’ve ever seen. Music is powerful. #9News pic.twitter.com/3adLTuBZB7

A reporter on the ground captured an even more surreal moment … as cops were literally pushing up against protesters, a violinist on stage started playing soothing melodies.

The protesters stood their ground as long as they could — several even formed a human barrier around the violinists to protect them from the police. Communal chants also erupted …  with phrases like, “Why are you in riot gear? I don’t see no riot here!”

The violin vigil for #ElijahMcClain pushes forward in the parking lot. Elijah lives the violin. Just feet from riot police, the sound of the violin drowns out the shouting #9News pic.twitter.com/3jFI7GgTom

Eventually, the protesters were forced to the parking lot … but they didn’t let that ruin the get-together. Some violinists followed along and continued on the pavement. The protesters even broke out in song, singing “Lean On Me” … in what proved to be a powerful statement in response to the brutality they’d just gone through, for no reason at all.

UPDATE: There is a small contingent of protestors that are arming themselves with rocks & sticks and continue to ignore orders to move back. This is now an unlawful assembly. Disperse.

Peaceful protestors & community members should move to the s/w parking lot by the library. pic.twitter.com/SqBeF0Z4MJ

If you’re wondering what Aurora PD had to say about this, they claimed the crowd was getting unruly and some were even arming themselves and hurling projectiles at the squad. In the end … the police say only 3 people were arrested for violating lawful orders after warnings were given.

It’s unclear why cops just didn’t stand back … this was almost entirely a peaceful protest and especially given what police did to Elijah, they could have just watched from a distance.