Sen. Bernie Sanders (I–Vt.) today introduced a bill that would greatly expand the estate tax, allowing the federal government to… 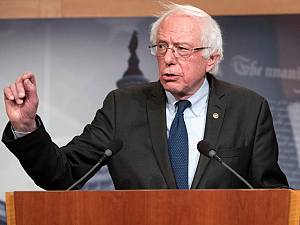 Sen. Bernie Sanders (I–Vt.) today introduced a bill that would greatly expand the estate tax, allowing the federal government to take up to 77 percent of a billionaire’s net worth after they die.

The avowed democratic socialist and possible 2020 presidential candidate is calling his bill the “For the 99.8% Act.” A summary of the legislation claims that “99.8 percent of Americans would not see their taxes go up by one penny under this plan.”

“At a time of massive wealth and income inequality, when the three richest Americans own more wealth than 160 million Americans, it is literally beyond belief that the Republican leadership wants to provide hundreds of billions of dollars in tax breaks to the top 0.2 percent,” Sanders said in a press release. “Our bill does what the American people want by substantially increasing the estate tax on the wealthiest families in this country and dramatically reducing wealth inequality. From a moral, economic, and political perspective our nation will not thrive when so few have so much and so many have so little.”

Sanders’ plan would represent a significant overhaul of the way the government determines how much of a person’s estate to take before the remainder can be transferred to surviving parties. Under the Tax Cuts and Jobs Act, signed into law by President Donald Trump in late 2017, the estate tax applies to those passing down more than $ 11.2 million, according to Tax Policy Center. The estate tax rate for all sums above that amount is a flat 40 percent.

According to the legislation’s summary, the bill would also end “tax breaks for dynasty trusts,” which allow some wealthy families to avoid paying estate and gift taxes by making a one-time transfer into a long-term trust fund.

Sanders’ press release claims the bill would generate $ 2.2 trillion in revenue from the country’s billionaires. Presumably, that amount would only be reached after each of the nation’s 588 billionaires have passed away. Under current law, about 1,700 families are expected to be affected by the estate tax on a yearly basis, the Tax Policy Center’s Howard Gleckman told the Washington Post.

Sanders is not the only progressive politician to call for a significant tax increase on the wealthy in recent days. Sen. Elizabeth Warren (D–Mass.), who is exploring a White House run in 2020, has suggested a 2 percent annual tax on Americans worth more than $ 50 million. Rep. Alexandria Ocasio-Cortez (D–N.Y.), meanwhile, has proposed a marginal tax rate of up to 70 percent on people who make more than $ 10 million per year.

Sanders’ plan has very little chance of passing in the Republican-controlled Senate, but it’s a bad idea regardless of viability. As Reason TV contributor John Stossel pointed out in August, estate taxes are a form of double taxation, since the federal government is taxing money that has already been taxed. Estate taxes can also have a negative ecological impact. As a 2016 Reason Foundation study noted, many wealthy Americans are worth a lot because they own land. Forcing their heirs to pay an estate tax “leads to land being subdivided, sold and converted to less ecologically beneficial uses.”

Biden Drowning In Classified Documents As Doubts Rise Among Dems

Will Republicans Have The Courage To End Welfare For Ukraine?