New York Mayor Bill de Blasio’s latest attempt to jump-start his inert presidential campaign includes a call for a new federal tax on robots. This unnecessary burden on businesses would expand the federal bureaucracy and fund boondoggle projects, and it is based on a faulty understanding of the relationship between jobs and automation.

In an column published last week by Wired, de Blasio outlines how his “robot tax” (his words) would work. Businesses that “eliminate jobs through increased automation” would be required to pay five years of payroll taxes, up front, for every employee replaced by a robot, de Blasio says. That tax revenue would be used to fund government make-work projects (not his words) in health care, the environment, and other areas.

“Displaced workers would be guaranteed new jobs created in these fields at comparable salaries,” de Blasio writes. “A ‘robot tax’ will help us create stable, good-paying middle-class jobs for generations to come.”

The tax plan comes with a new bureaucracy to regulate automation in the workplace: the Federal Automation and Worker Protection Agency, which would be in charge of determining which jobs were eliminated by automation and how much “robot tax” employers would owe.

“A worker pays income tax. You take away millions and millions of workers, that’s a lot less revenue to take care of all the things we need in our society, and it means, of course, millions and millions of people don’t have a livelihood,” de Blasio explained during an appearance on Fox News. Tucker Carlson nodded along as de Blasio said automation “could be the single most disruptive force in our society that we’ve ever experienced.”

It’s true that automation could disrupt to the American workforce significantly in coming years, but de Blasio—and others, including fellow Democratic presidential candidate Andrew Yang, who has centered his campaign on fears of automation-driven unemployment—is likely overstating the negative effects. Machines have been replacing manual labor literally for centuries, and that process has made society richer, safer, and healthier.

As technology advance, human jobs don’t disappear—they just change. The advent of the automobile meant there were fewer jobs in the carriage making and blacksmithing professions, but it created a host of new opportunities on assembly lines and in mechanic shops. The very blue-collar jobs that de Blasio wants to protect from automation were the result of a similar tech-driven disruption in the past.

Proposals like de Blasio’s are based on the notion that the current iteration of widespread automation is a greater threat than similar events in the past. Some studies seem to back that claim. De Blasio points to a Brookings Institution paper estimating that 36 million American jobs are “highly likely” to be automated in the next few decades. Another oft-cited study is a 2013 survey from Oxford University showing that nearly half of all jobs in the United States are at risk of being automated away during the next two decades.

But other studies suggest those fears are overblown. In 2017, the Centre for European Economic Research, a German think tank, found that the “automation risk for U.S. jobs falls from 38 percent to 9 percent when allowing for workplace heterogeneity.” That’s because “the majority of jobs involve non-automatable tasks” and “workers of the same occupation specialize in different non-automatable tasks.”

In other words, many workers won’t be displaced; they’ll simply take on different roles as parts of their jobs are automated. That makes a lot of sense. The automation of publishing—the very thing that allows you to read this article on a website instead of on a piece of paper stamped by a handset typeface—allows writers and editors to do different tasks and to work more efficiently.

Automation doesn’t just change how work is done; it actually creates more jobs than it destroys. As Reason‘s Ron Bailey explained in a 2017 feature:

When businesses automate to boost productivity, they can cut their prices, thus increasing the demand for their products, which in turn requires more workers. Furthermore, the lower prices allow consumers to take the money they save and spend it on other goods or services, and this increased demand creates more jobs in those other industries. New products and services create new markets and new demands, and the result is more new jobs.

Or consider what’s happened in the past few years. American companies installed more robots in 2018 than in any previous year, but the addition of more than 28,000 automated workers last year did not cause unemployment to spike. In fact, according to the federal Bureau of Labor Statistics, the number of Americans working hit an all-time high.

“The world economy continually faces this cycle of disruption and reinvention. Yet we have more people working today than at any point in history,” writes Robert Huschka, director of strategies at the Association for Advancing Automation (A3), which tracks the number of robots involved in the American workforce. According to A3, the use of robotics in the workplace parallels overall employment trends—which is not what you’d see if robots were replacing workers on a large scale: 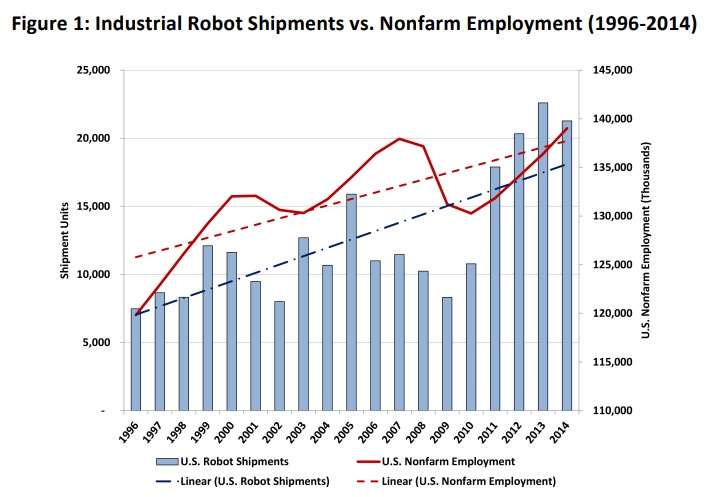 There’s no doubt that more advanced robots and the development of artificial intelligence will change how Americans work. But there’s nothing to suggest that this is a problem requiring an expensive new federal program. De Blasio’s “robot tax” is a desperate attempt by a flailing candidate to achieve some level of relevance by selling an economic panic.

From check-out scanners to MRI machines, robots have made us better off. Forcing future Americans to do manual labor that could be automated instead isn’t “saving” them from job losses—it’s trapping them in jobs that could be made more efficient, more productive, and more rewarding.

What Does Ron Paul Think About The Trump Administration?…Covid Vaccines?…Let’s #AskRonPaul!