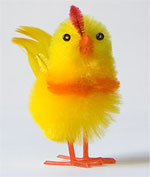 It was the soundtrack to 1981, the backdrop to an entire summer of crazy 'wing-flapping' on the dancefloor, and probably the worst record you ever heard, but the Birdie Song by The Tweets is up for re-release next month.

Originally written in the 1950s by Werner Thomas, an accordion player from Davos in Switzerland, the oom-pah song became popular at drinking festivals, such as Oktoberfest, where the 'chicken dance' was invented.

It was released on vinyl in Holland in 1980, and then in the UK by The Tweets in 1981, where it 'soared' into the charts at number 2. You could hear it everywhere: the radio, the TV, people humming it in the street, on the bus, at work, in the dole office, betting shop and pub. It even got played in nightclubs, where drunken, fighting hordes temporarily forgot their disputes, and flapped their 'wings' in unison on the dancefloor until they collapsed, threw up, or laid an egg.

To many people, it became 'a huge, sinister and hideous presence' from which they were unable to escape, an insidious, lingering threat around every corner, and the source of countless sleepless nights when brains refused to forget it, and amplified it to 'crescendo level'. It was The Summer Of Tired Eyelids. In 2000, it was voted 'The Most Annoying Song Of All Time' by dotcom.

Twitter has agreed to sponsor the release, to which there have been no changes at all, allowing music fans to live through the nightmare once more.