NASHVILLE, TN – The appearance of a black man in a television commercial frightened white viewers and resulted in more… 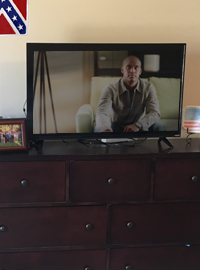 NASHVILLE, TN – The appearance of a black man in a television commercial frightened white viewers and resulted in more than 270 calls to police.

“Scared the hell out a me! I saw a black man where there shouldn’t be no black man – in my house,” said Ken Grumman. “I thought I was gonna die for sure. There shouldn’t be no black people anywhere near my house. So you’re damn right I called the police. Those type of people don’t belong on TV, especially here. In my house. I just don’t even know. This country is going to hell, but thank baby Jesus that we have someone with such a strong moral code in the White House that will stand up for the rights of us white people.”

During a Fox News broadcast last week a black man briefly appeared in a commercial. Many viewers of broadcast were startled, confused and frightened by the appearance of the black man on their television sets and called 911.

“I was sittin’ there, watching the news, like I do, ‘cus I ain’t got no job right now because the democrats and, um, immigrants and… Hillary. She should be locked up!” said Sarah Crews. “But, um, I was watchin’ the news and then all of a sudden there is some black guy on there and that ain’t right so I called the cops. He coulda been a robber or maybe a mugger. I do know that he was going ta try ta rape me. Him and all’a his muslim brothers. I bet he was a member of that M18 gang. Yeah, he’s one of them, uh, gang bangers. ”

Within five minutes of the commercial airing on Fox News, 911 operators received 100 calls reporting that a black man had broken in to viewer’s homes.

“We take every call to 911 seriously so we did send officers to each of the homes that reported a black, male intruder,” said 911 call center officer Cheryl Jenkins. “Fortunately the officers realized, in most cases that the perp was just on the TV before (the officers) opened fire. I think we will only have to replace 120 some-odd TVs that were shot up on accident.”

The commercial, for a male enhancement pill, featured one scene, lasting less than three seconds, with a black male actor.

“When we made this commercial, we had no idea that this would be the reaction,” said Will Benti, owner of Starlight Productions, the company that produced the commercial. “We were hired to film the commercial and we just did what we always do, we brought in some talented actors that we’ve worked with before. Tom, the actor that caused all the police calls, is one of the most unthreatening people I’ve ever met. He runs a shelter for abused puppies for Pete’s sake! This guy couldn’t hurt a fly. Yet here we are, now we have to think about not using him in the future for any product marketed to white people because he’s too ‘threatening.’”

Fox News representatives apologized for the confusion and promised to never broadcast a commercial featuring any non-white actors on the network again.