Orlando, FL — Body camera video from a police interaction earlier this year has a community in uproar and the Orlando police… 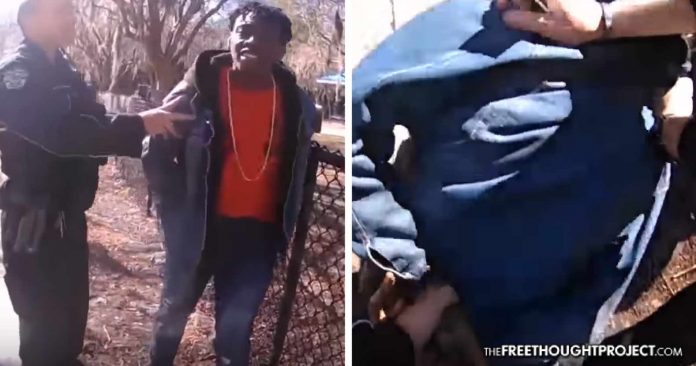 Orlando, FL — Body camera video from a police interaction earlier this year has a community in uproar and the Orlando police department conducting damage control as it epitomizes everything wrong with police today. Two innocent teenagers were stalked, harassed, physically accosted, and arrested despite breaking no law, all because two cops were on a power trip.

On January 4, Nyejewel Burney and his friend left their apartment to walk to work when two Orlando police officers began to stalk them. They had done nothing wrong, yet the officers followed them in the cruiser in an obvious move to intimidate them.

After having enough of the officers harassment, Burney raised his middle finger to express his discontent to the officer.

It should be noted that Flipping the bird has been ruled to be free speech many times over. In fact, in a 14-page opinion, the U.S. Court of Appeals for the 2nd Circuit addressed the specific action of flipping off cops when it ruled that the “ancient gesture of insult is not the basis for a reasonable suspicion of a traffic violation or impending criminal activity.”

However, we’ve seen citizens pepper-sprayed, assaulted, and arrested for this act of free speech. And, as the video below shows, police could not care less about protecting your free speech if it’s something they don’t like.

What’s more, it wasn’t as if Burney was trying to provoke the officers, he was merely expressing his frustration with being stalked by armed men.

“It wasn’t like they just seen us and we just flicked them off,” Burney said. “They’d been following us the whole time.”

After Burney raised his middle finger, the officers, clearly ignorant of the law, or at least, ignoring the law, decided to abuse their authority and attack the innocent man.

“We’re just driving by, and you want to flick us off like you’re a tough guy?”

“Freedom of speech, sir,” Burney correctly states as he tries to walk away.

“Freedom of movement,” Burney says before trying to walk away from the cop as he steps into the road.

“And now you just jaywalked. Give me your ID. Get over here,” the officer says as he begins physically assaulting Burney, ripping off his back back and forcing him to sit on the sidewalk.

As the teen’s friend attempted to walk by, he was also accosted and then handcuffed.

“This is our traffic stop, you got to leave … You’re failing to leave. Now you’ve got to sit down. Now, you’re not free to go.”

All this innocent man had done was try to stand away from the scene to observe, and he too was attacked.

“Y’all wonder why people don’t like police now. Because y’all do shit like this,” Burney said in the body-cam footage. And he’s right.

Burney was then arrested for “resisting arrest.” However, after State Attorney Aramis Ayala watched the body camera video, all the charges were dropped and she referred to the officers’ actions as “inappropriate.” Ayala then contacted the Orlando police department to alert them to this injustice.

“My office identified inappropriate conduct involving two OPD officers. As a result of reviewing the body cam footage, the case was immediately dropped. It is imperative prosecutors do not perpetuate injustice. We contacted OPD with our concerns and I look forward to reviewing the outcome of their inquiry into the matter,” Ayala said.

“Hopefully, this will be, like, a lesson for other officers that you just can’t target people and get away with it every time,” Burney said.

“I look forward to reviewing the outcome of their inquiry into the matter,” Ayala said.

On Friday, Orlando police Chief John Mina released a statement in response to the body camera footage, noting that what he saw was concerning.

“Upon my initial review of the body camera video, I have serious concerns about the interaction. Which is why I directed staff to launch an internal investigation to ensure a full and thorough investigation of the incident and determine if there was any violation of policy. Having access to this video footage is why we equipped our officers with body cameras to provide additional transparency and help us better understand what transpired during incidents from beginning to end. Mutual respect and trust between our officers and residents is paramount to the job our Orlando Police Department does every day to keep our community safe. We must ensure we build on that trust and hold our officers accountable if that trust is violated.”

If Mina is truly concerned with building trust, he needs to make an example out of the two officers in the video below by immediately firing them and bringing them up on charges of official oppression. Anything less than that will only ensure a future of more divide.