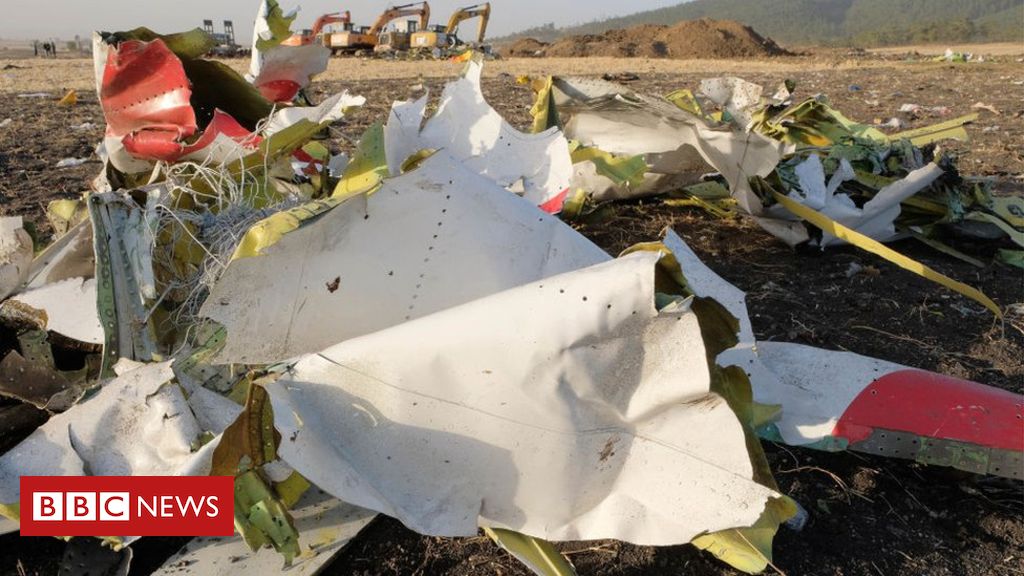 Officials probing the crash in Ethiopia of a Boeing 737 Max have preliminarily concluded that a flight-control feature automatically activated before it crashed, the Wall Street Journal says.

The newspaper, citing unnamed sources, says the findings were relayed on Thursday at a briefing at the US Federal Aviation Administration (FAA).

The flight-control feature is meant to help prevent the plane from stalling.

Boeing said it could not comment as the investigation was still under way.

It said all inquiries should be referred to the investigating authorities. The BBC has approached the FAA for a response.

Thursday also saw what is thought to be the first lawsuit filed on the crash.

Together, the two crashes have claimed 346 lives.

MCAS is software designed to help prevent the 737 Max 8 from stalling.

It reacts when sensors in the nose of the aircraft show the jet is climbing at too steep an angle, which can cause planes to stall.

But an investigation of the Lion Air flight last year suggested the system malfunctioned, and forced the plane’s nose down more than 20 times before it crashed into the sea, killing all 189 passengers and crew.

The US Federal Aviation Administration (FAA) says there are similarities between that crash and the Ethiopian accident on 10 March.

Boeing has redesigned the software so that it will disable MCAS if it receives conflicting data from its sensors.

As part of the upgrade, Boeing will install an extra warning system on all 737 Max aircraft, which was previously an optional safety feature.

Neither of the planes, operated by Lion Air in Indonesia and Ethiopian Airlines, that were involved in the fatal crashes carried the alert systems, which are designed to warn pilots when sensors produce contradictory readings.

Earlier this week, Boeing said that the upgrades were not an admission that the system had caused the crashes.

Investigators have not yet determined the cause of the accidents.

A preliminary report from Ethiopian authorities is expected within days.

The report comes a day after a lawsuit was filed in a Chicago federal court by the family of one of the victims of the Ethiopian crash, Jackson Musoni, a citizen of Rwanda.

All Boeing 737 Max are currently grounded. It is still not certain when the planes will be allowed to fly.