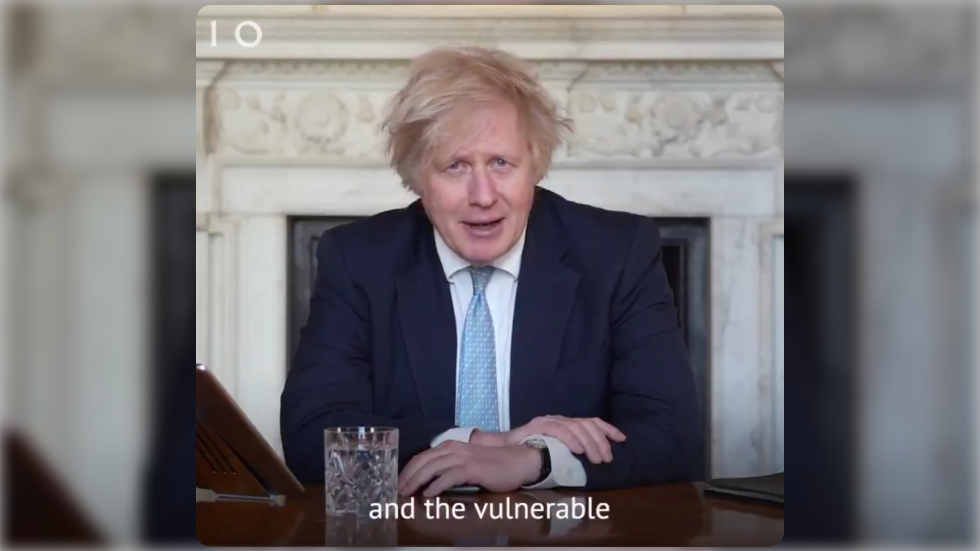 UK Prime Minister Boris Johnson was accused of undermining his government’s vaccination program after he told Brits that those fully inoculated against Covid-19 could still not meet indoors as they were not completely protected.

In a Q&A video published on Friday, Johnson said vaccinated friends and family members could not meet one another indoors because “we’re not yet at that stage”.

“Even though your friends and family members may be vaccinated, the vaccines are not giving 100% protection, and that’s why we just need to be cautious,” he claimed, concluding that the government does not think vaccination removes the risk of transmitting the virus.

Social media users were quick to criticise Johnson for undermining the UK’s vaccination program with his comments, and mocked the prime minister for inadvertently making an argument against vaccine passports, which he reportedly wants to implement.

He’s literally destroyed his own argument

Then your passport idea makes no sense does it

“Feels like a slightly dangerous argument when govt trying to persuade everyone to get jabbed – and when road map suggests people will be able to meet indoors from next month,” tweeted Daily Mail political editor Jason Groves, while another Brit questioned when life “require(d) 100% safety”.

“Following that logic, almost everything would be banned,” he wrote.

Others pointed out that up to 30 people can currently be in a room together for funerals, whether they’re vaccinated or not, and warned that Johnson’s comments could make people stop following the coronavirus guidelines.

They’ll obviously clarify that this is “for now” but even that is 100% ridiculous. Why are we getting vaccinated then? Does the government *want* people to simply start ignoring guidelines? https://t.co/oa7tTlKKn8

The UK government is trying to encourage young people to get the vaccine by threatening the prospect of vaccine passports, on the one hand, but then saying stuff like this that suggests even two vaccinated people meeting is too high risk. Crazy. https://t.co/jNuHHt0uip

Pilot events for a vaccine passport system are reportedly being planned this month, and Johnson has previously said that pub landlords and other business owners could ban entry to those who have not been vaccinated or cannot provide a negative Covid-19 test result.

On Thursday, Johnson also claimed that vaccine passports would “definitely” soon be required for international travel and that a similar system could also be “useful” domestically.

Also on rt.com ‘Most appalling idea & almost certainly illegal’: Brits protest over Johnson’s suggestion that pubs could ban the unvaccinated