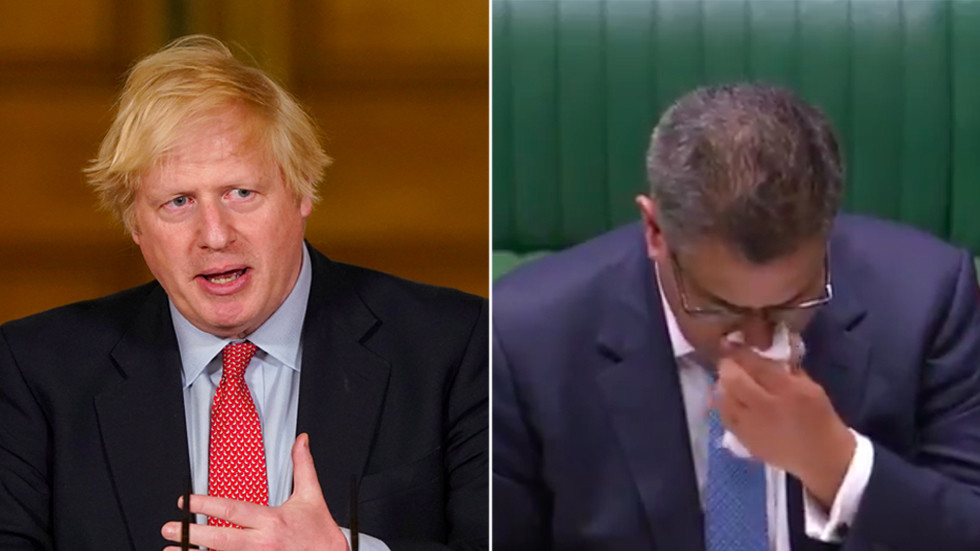 A UK business minister awaiting Covid-19 test results conducted a meeting with Boris Johnson just hours before becoming ill in the House of Commons, meaning the prime minister may have to self-isolate yet again.

During a Downing Street media briefing on Thursday, the prime minister’s spokesman revealed that Business Secretary Alok Sharma held a 45-minute meeting on Tuesday with Johnson in which Chancellor Rishi Sunak was also present.

Just hours later, Sharma was seen sweating and wiping his nose at the dispatch box in the House of Commons on Wednesday, prompting him to take leave from Parliament and self isolate, fearing he may have contracted the coronavirus.

Business Secretary Alok Sharma wiped his face several times with a handkerchief and appeared to struggle as he spoke about the Corporate Insolvency and Governance Bill in the Commons pic.twitter.com/ysQ5RPF9lR

In what could be another calamitous moment for the PM and his government during the coronavirus crisis, Johnson was seen moments after concluding PMQs seemingly breaking social distancing rules. The consequences of which could mean a number of MPs also having to self-isolate – if Sharma’s Covid-19 test result comes back positive.

The prime minister’s spokesman said that if Sharma’s results do indeed come back positive, then the minister “will work with the test and trace service to share information about his recent interactions.” Asked whether the PM and Chancellor would have to self-isolate, he replied: “I would expect us to take medical advice and follow it.”

However, the spokesman went on to insist that the meeting conducted by Johnson, Sharma, and Sunak took place at Number 10 while observing social distancing rules.

The incident has further inflamed tensions between the UK government and opposition parties, such as Labour, who were against the recall of MPs to Parliament. Labour’s Shadow Leader of the House – Valerie Vaz – said Parliament had been brought into “disrepute,” and by stopping the so-called hybrid proceedings was “putting people’s lives at risk” – calling for virtual measures to be reinstated until the Covid-19 R (reproductive) number had been reduced.