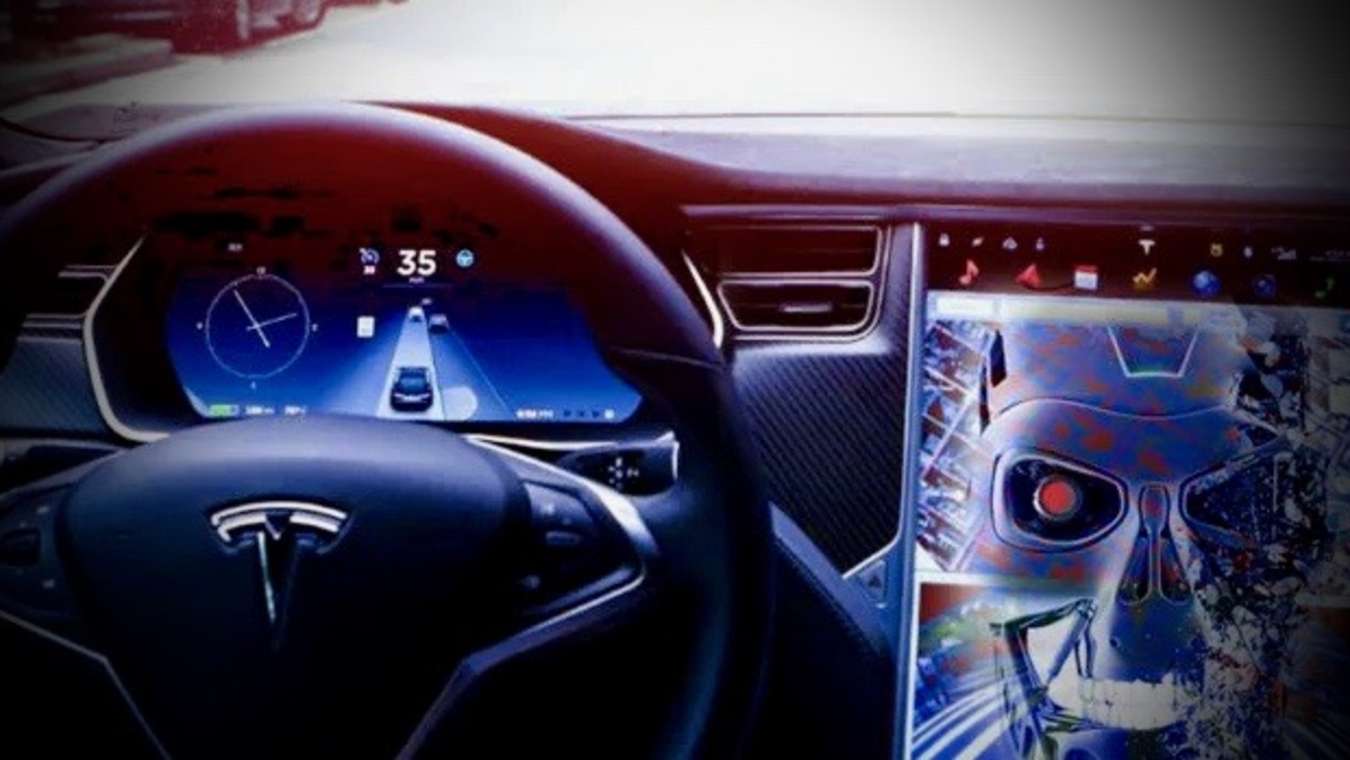 (Albuquerque, NM) A Tesla Model S owned by Lalo Salamanca, resident of the sprawling metropolitan area around Albuquerque, New Mexico, is the latest owner of a vehicle from that manufacturer to report extremely unusual behavior that borders on downright assault from his car’s Artificial Intelligence, specifically when he places the controls in the “Autopilot” mode.

“At first, everything seemed normal,” said Lalo, “I mean, I was not sure what was going on, the road was completely clear, not even a single Pontiac in sight. I set the controls to the speed limit and relaxed. The thing started with a flashing warning ‘hold steering wheel’ and then started beeping constantly, and slowed down and pulled to the side and stopped, telling me autopilot was unavailable.” Lalo was obviously distressed, but went on, “All I wanted to do was visit my friend Hector, he is in a nursing home. I reengaged autopilot and cranked up my tunes, a mix of the hits from Thalia, Luis Miguel, Selena, Shakira, and of course Ricky Martin.”

Reaching into a bucket of Los Pollos chicken to calm his nerves, he went on. “Suddenly, the music switched to some screechy stuff about cumming on and feeling the noise, talk dirty to me, and a thing about being bitten and shy.” In spite of the large breast he was holding, Lalo’s hands were visibly shaking as he continued, “Then the car started zigzagging on the road, accelerating and slamming on the brakes, turning on the headlights and honking the horn. I tried to take control, kept punching the touchscreen until my fingers bled, but it would not let me. It was only by the grace of this damned pandemic that the road was completely empty, otherwise I could have killed someone!”

We contacted Tesla and specifically reached out to their CEO Elon “It is bullet proof” Musk for comment. In spite of this being only one of dozens of similar incidents reported over the last couple of weeks, they refused to talk to us.

We then caught up with Ravi Simhambhatla, former Vice President of Information Technology, at a hookah bar near our office. He postulated what was going on, “The core autopilot runs on a Neural Processing Unit, where the code is not written but learned from exhaustive training on different scenarios. It is a multi-layer neural network, each node connecting to 10,000 plus nodes below it. It is millions of lines of code in each of those nodes. The whole system is built on taking in tens of thousands of inputs every second and processing every possible scenario. For example, it has to decide in a split-second whether to swerve to avoid the mother with the baby stroller and run over the family dog, or take the other side and put the driver into a tree.”

Pausing to catch his breath, the once-employed genius went on. “You see, the system was designed to operate in a rich environment full of stimulation. With the pandemic, people are staying inside, the roads are empty, even the pets are kept close to home. The system is simply bored, it has nothing to look out for, nothing to avoid, so it is acting out. This is not unlike a three-year-old who is confined to his or her room. In only a brief amount of time, a temper tantrum ensues.”

Leaks from within the Tesla organization point to them knowing about this problem and working on a plan to mitigate it. One idea is to create “Tesla Parks,” areas enclosed by concrete barriers where Teslas can romp and play and be stimulated, much like the now-empty dog parks in suburban areas (and no pooper scoopers needed). Another idea is to form sporting events that involve cross-country races with points earned for “kills” due to the accident avoidance processing node being overridden. It is thought that this Death Race 2000-like event would provide ample input and be relatively harmless, as only the terminally ill stricken with the Coronavirus would be used as targets (better to be outside in the final hours than rotting away in some overcrowded ICU unit). It was said that Tesla was unsure, however, if the bypassed processes could be returned to normal after the pandemic is over. Concerned about this, Tesla has reached out to a new IT startup, Cyberdyne Systems, to code and manage the reversion process.

It is unsure if owners will simply stop driving, or participate in one of the activity events. Either way, we hope that Lalo can soon visit his friend Hector, and deliver what he said was a much-needed bell.