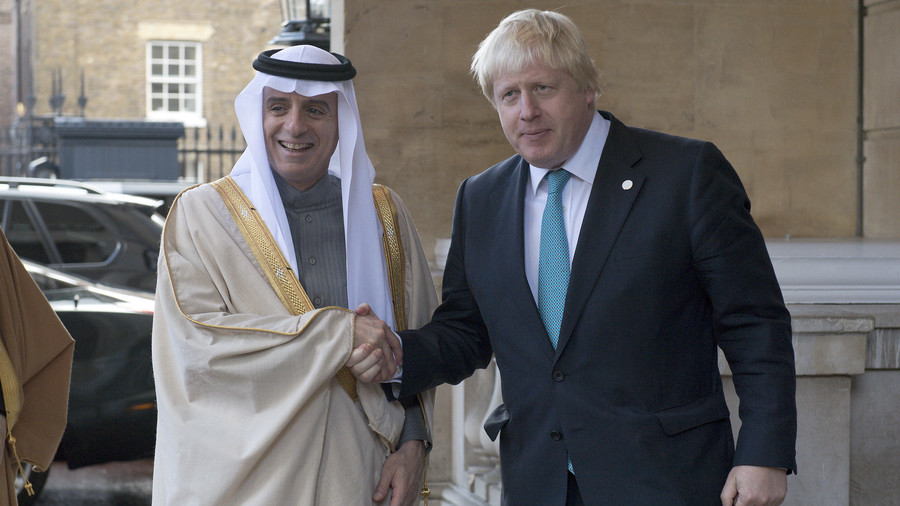 Johnson flew to Jeddah on September 19, for a three-day visit, where he reportedly was treated to accommodation, food and travel by the Saudi Ministry of Foreign Affairs.

An entry in the Commons register of members’ interests read that Johnson’s goal was “meeting with regional figures to promote education for women and girls.”

Johnson was widely condemned on Twitter, with the Mirror newspaper even referring to him as a “lying toad.”

Boris Johnson says his visit to Riyadh 19-21 September cost £14,000 and was paid by Saudi Arabia. The visit was to meet regional figures "to promote education for women and girls."

The Brexiteer had quit as Foreign Secretary in July, over May’s handling of Brexit negotiations.

During his time as Foreign Secretary, Johnson refused to back halting arms sales to Saudi who were –and are still– carrying out a devastating air campaign against Houthi rebels in Yemen. He was also accused by human rights groups of blocking a UN investigation into Saudi war crimes committed in Yemen.

Another for the annals of upstanding British government:

"[His] trip was right in the middle of a vicious human rights crackdown in Saudi Arabia and you have to ask – did the former foreign secretary raise the issue of jailed women rights activists like Loujain al-Hathloul while he was there?" – @KateAllenAIhttps://t.co/wRj5IrD7vD

The UK government’s support of Saudi Arabia has so far not wavered, even when their US counterparts are questioning their ties to the Kingdom and calling for a ceasefire in Yemen.