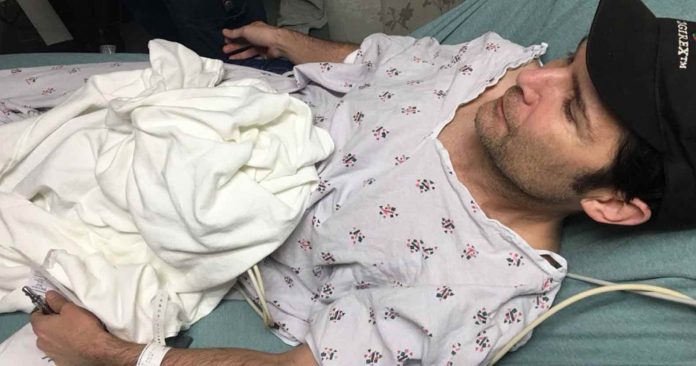 Actor Corey Feldman was the subject of an attack late Tuesday night after three men approached him in his car and one man began stabbing him. He was immediately rushed to the hospital and he now says he believes the attack was “revenge” for exposing pedophiles in Hollywood who abused him when he was a child.

Feldman took to Twitter at 3:38 a.m. in Los Angeles and wrote, “I’m in the hospital! I was attacked tonight! A man opened my car door and stabbed me with something! Please say prayers for us! Thank God it was only myself and my security in the car, when three men approached! While security was distracted, with a guy pulled up and attacked! I’m OK!”

IM IN THE HOSPITAL! I WAS ATTACKED 2NITE! A MAN OPENED MY CAR DOOR & STABBED ME W SOMETHING! PLEASE SAY PRAYERS 4 US! 🙏🏼🙏🏼 THANK GOD IT WAS ONLY MYSELF & MY SECURITY IN THE CAR, WHEN 3 MEN APPROACHED! WHILE SECURITY WAS DISTRACTED, W A GUY A CAR PULLED UP & ATTACKED! I’M OK! pic.twitter.com/TZ0ppZeEWN

Feldman also claimed that the Los Angeles Police Department is now investigating the attack as “an attempted homicide.” He said he has received multiple threats on all social media platforms from what he referred to as a “wolf pack,” and he believes he was stabbed by one of the members of this group.

“I have had mounting threats on all social media platforms by this vile ‘wolf pack’ and this, I’m sure, is a result of those negative actions! I have reason to believe it’s all connected!” Feldman wrote. “Enough is enough! How sick are these people?!?”

Feldman then began sharing links to reports on his attack where he promised there would be “more details coming soon” and he said, “Nothing from the police yet. There were three men, but only one attacked.”

Feldman’s claim that he believes the attack was revenge for his decision to expose the pedophiles who abused him when he was a child actor is notable because, after years of warning about child predators in Hollywood, Feldman was finally vindicated in 2017.

As The Free Thought Project reported, Feldman attempted to work with LAPD by filing reports about the abuse, both in 1993 and in 2017. Santa Barbara Police initially claimed that the evidence of Feldman reporting his abusers to police did not exist, and they said in October 2017, “We are aware of the statements that Mr. Feldman is making regarding an investigation in 1993. Our records do not indicate that he named any suspects.”

Then in December, the Santa Barba County Sheriff’s Office admitted that tapes of the interview did exist. In a statement, the department’s public information officer said, “In a container which included the original reports from the investigation, the Sheriff’s Office located some detective working copies of audio recordings made during the investigation. A copy of Mr. Feldman’s interview was located.”

When the #MeToo movement was at its height in October, Feldman attempted to once again raise awareness about the pedophiles in Hollywood who sexually abused him. Just days after speaking out about his plan to expose the predators, he was detained by police in Louisiana and charged with one count of possession of marijuana and a traffic charge.

After police refused to investigate Feldman’s claims in 1993 and then initially called him a liar and acted as though he had never filed a report, intense scrutiny from the mainstream media led Feldman to file another report with the LAPD in 2017. Just as Feldman predicted, the department was quick to drop the case, claiming that the statute of limitations had passed on the accusations.

Feldman has not said where he sustained injuries from the stabbing attack, and LAPD has yet to comment on the case.

@LAPD R CURRENTLY INVESTIGATING THE CASE AS AN ATTEMPTED HOMICIDE! I HAVE HAD MOUNTING THREATS ON ALL SM PLATFORMS BY THIS VILE “WOLFPACK” & THIS IM SURE IS A RESULT OF THOSE NEGATIVE ACTIONS! I HAVE REASON 2 BELIEVE ITS ALL CONNECTED! ENOUGH IS ENOUGH! HOW SICK R THESE PPL?!?

Illinois Spent the Last Decade Losing Population and Learning Nothing