Taking the idea of practicing what one preaches to the next level, feminist academic Dr Victoria Bateman laid out her… 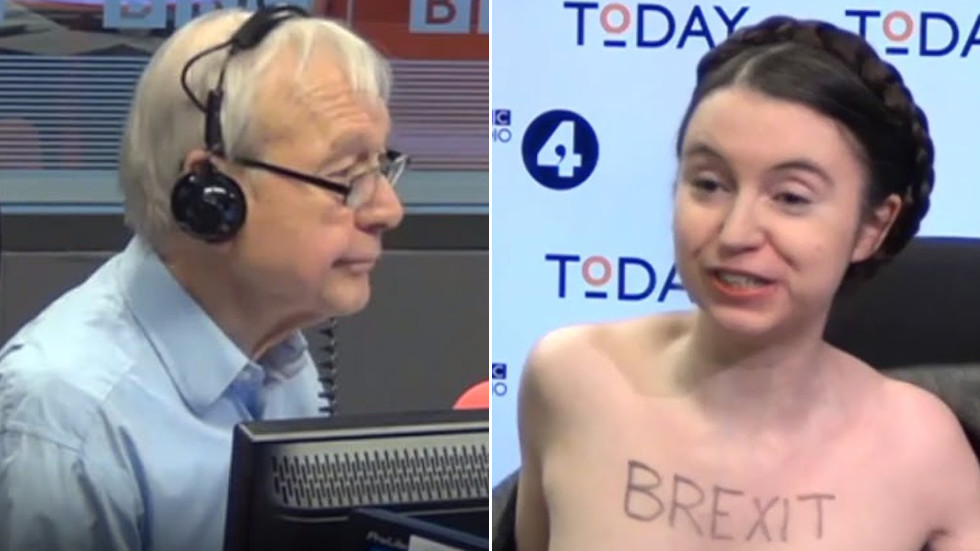 Taking the idea of practicing what one preaches to the next level, feminist academic Dr Victoria Bateman laid out her viewpoint that ‘Brexit will leave Britain Naked’ while completely nude live on the BBC.

“Oh, I see you’re naked”, interviewer John Humphrys announced in his characteristically undisguised style as Dr Bateman joined him in the Radio 4 studio. If the 75-year-old radio host had any doubts regarding his plans to retire by the end of the year, his evident discomfort throughout the five-minute interview likely redressed his hesitations.

'I invite Jacob Rees-Mogg to a naked debate about Brexit!' 🗣️

Dr Bateman reassured home audiences that she wasn’t simply being lewd, but had disrobed in order to expose the cloaked anti-immigrant sentiment thinly veiled in the pro-Brexit movement. With full-frontal importunity, Bateman had also written the slogan “Brexit Leaves Britain Naked” across the front of her body.

Also on rt.com Women have right to sell their bodies for sex, says Cambridge professor

Unamused by Bateman’s visual analogy, Humphrys reminded her that many people have made similar arguments without resorting to indecent exposure, adding that the public might confuse her crude attempt at a political statement with sophisticated exhibitionism.

Humphrys followed up, asking if “Brexiteers” should be expected to follow her brazen example, a prospect Bateman seemed thrilled to consider. Without missing a beat, she challenged genteel Conservative MP Jacob Rees-Mogg to a “naked debate” about quitting the European Union – the Member of Parliament for North East Somerset has yet to respond to the invitation.

The remain campaigner has been promoting EU-integration in the nip for quite some time… at lectures, in artwork and on her public Twitter account.

There is *so* much to be gained by challenging the notion that women's bodies are sinful – & by standing up to the presumption that if a woman's body is on show, she is trashy, stupid, worthless & deserving of less respect. That's why I for one will *not* be told to cover up. pic.twitter.com/8mVg1LkVrW

The academic’s political efforts have sparked a range of reactions across social media. Some high-profile hate from conservative crusader Piers Morgan earlier this week fired up the irrepressible ire of the internet’s modesty advocates.

OMG! If you want to make a point fine – get outside parliament, but please get wrapped up!