UK Prime Minister Boris Johnson “would not agree” with Black Lives Matter protesters, who have taken to city streets around… 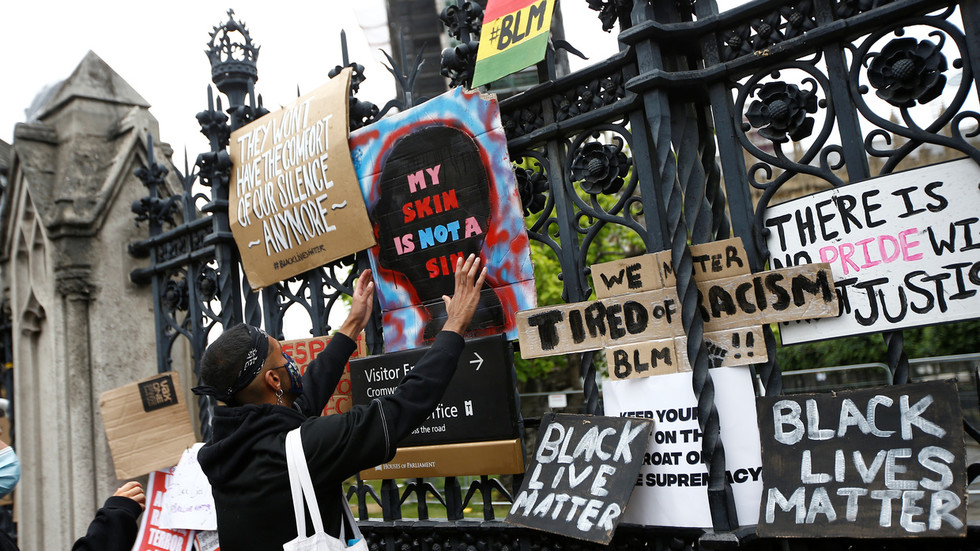 UK Prime Minister Boris Johnson “would not agree” with Black Lives Matter protesters, who have taken to city streets around the country in recent days, that Britain is a “racist” place, his spokesperson has said.

The PM “doesn’t doubt that there continues to be discrimination and racism” in the UK, but he “would not agree that this is a racist country,” the spokesman said on Monday.

He added that Johnson felt “very significant progress” has been made on the issue, but said the PM knew there was “more to do” and is “absolutely committed to continuing efforts to stamp out racism and discrimination,” he said.

The comments from Downing Street come as Black Lives Matter protests, sparked by the police killing of George Floyd in the US, spread rapidly overseas.

Also on rt.com WATCH protesters TEAR DOWN statue of slave trader in Bristol

Protests in London turned violent at the weekend, with police and demonstrators brawling outside the Foreign Office in Whitehall, prompting Johnson to say the peaceful movement had been “subverted by thuggery.” Meanwhile, crowds in Bristol toppled a statue of slave trader Edward Colston, rolled it to a nearby river and tossed it in.

Speaking in the House of Commons last week on the controversy over Floyd’s death, Johnson said “of course black lives matter” and that he “totally understands” the anger many people are feeling “not just in America but around the world, and in our country as well.”

Johnson himself has, however, been personally accused of harboring racist views throughout his career, with many recalling past comments referring to black people as “piccaninnies” with “watermelon smiles,” and to Burka-wearing Muslim women as “letterboxes.” The PM has since claimed many of his past statements were “satirical.”