A former UK intelligence chief appeared on the BBC to push for Western strikes on Syria, and also found time…

A former UK intelligence chief appeared on the BBC to push for Western strikes on Syria, and also found time to suggest an earlier intervention from the US and its allies may have saved lives.

The former head of MI6 was interviewed on the BBC’s flagship Today program on Thursday. It’s an interview that may well be studied by historians as the very epitome of the way the British establishment talks to itself, and fails to learn the lessons of its own actions. 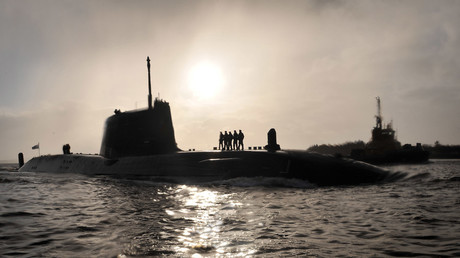 Sir John Sawers was MI6 chief from 2009 to 2014, and absolutely buys into the idea that Western bombs have some kind of humanitarian power, which may come as a surprise to people living in Iraq, Libya, and Yemen, to name just a few.

The logic used to condone his call for intervention in Syria over an alleged chemical weapons attack in Douma was perhaps best summed up when Sawers said: “More people have been killed, more damage has been done in the Syrian civil war in which we didn’t intervene, than in the Iraqi war in which we did intervene.”

The BBC’s most combative radio host, John Humphries, did nothing to push back on the extraordinary logic of this quote. It must be an extremely pleasant bubble that Sawers lives in to come to the conclusion that Western intervention in the past has proved to be a force that saves lives and prevents damage.

The most striking part of this quote though, is that the former head of MI6 truly believes that the war in Iraq was an intervention. For an intervention to happen, there has to be a war happening in the first place. In Iraq, there was no more a war than there were weapons of mass destruction. Iraq was an invasion, based on nothing.

Where are the anti-war vocies? Between the peak time of 0730+0830 on @BBCr4today this morning there were two guests discussing likely military action in Syria: Ex-National Security Advisor Sir Peter Ricketts and ex-MI6 chief Sir John Sawers @medialens@markcurtis30@CPMacL2008

Sawers will be unlikely to reflect on that fact that the world beyond the West sees American and British bombs being dropped on developing countries, and asks when the taboo against Washington and London taking it upon themselves to impose their will from 20,000 feet, will be challenged. Launching strikes against a country which has not attacked you, and which has not asked for you to intervene, is also not exactly in line with international law.

So what does Sawers want to see now? Discussing Trump’s strike against a Syrian airfield last year over allegations of another chemical weapons attack, the former intelligence chief said: “It’s quite clear that the deterrent impact of that strike was insufficient, because the Syrians have gone ahead and done it again.”

So he believes it didn’t work before, yet he wants to do it again, but harder. The belief that if something doesn’t work you should do more of it to me suggests the foreign policy wonks coming up with these plans may need an injection of fresh blood, no pun intended.

Sawer was pulled up on his claim that Britain decided not to intervene in Syria, admitting that the West did support anti-Assad forces “at a level which was not going to make a strategic difference on the ground. We supported them to the extent that we could keep them going so that they could prevail.”

The BBC’s Humphries replied with: “Exactly, the worst of both worlds.”

Sawer replied: “That may be the historical judgement. That was the view that political leaders in London, Washington and Paris took at the time,” concluding “that is now history.”

Again, the interpretation of events from a senior member of the British intelligence community will be amazing to some. In one breath, he suggests that a lack of intervention cost lives in Syria, then he admits there was an intervention, but only enough to keep the war grinding on for years and years, costing countless lives in the process.

The West’s humanitarian bombs are hardly going to be welcome, and they may be “smart,” but they’re not smart enough to avoid innocent bystanders who will be caught up in the carnage. But figures like Sawers are in no mood to learn the lessons of their own history.