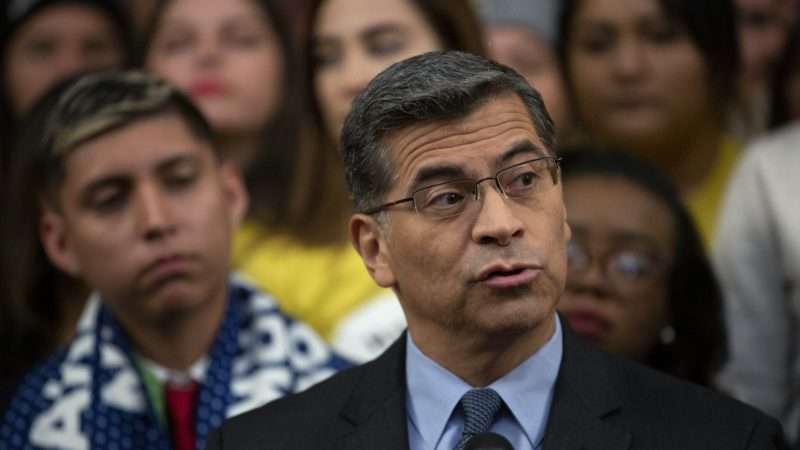 California Attorney General Xavier Becerra is engaging in the Golden State custom of meddling with the wording of ballot initiatives to influence voter behavior.

Ballot initiatives and referendums are supposed to be a way for California voters to bypass entrenched political interests when lawmakers refuse to consider policies that voters support or pass laws that they do not. Yet California’s political class has a long history of putting its thumb on the scale to influence the outcome of the vote. One of those mechanisms is writing the initiative summary. That power is vested in the attorney general, who is beholden to a political party whose work and budget is heavily affected by voters’ behavior.

This November, California voters will have 12 propositions to consider along with all the candidates running for office. But for two of the ballot initiatives, Democratic Attorney General Xavier Becerra has used his power to subtly control how the initiative is summarized, in one case to help it pass, in the other, to turn voters against it.

Proposition 15 would scale back some of the government limitations of Proposition 13, the decades-old law that severely restrains the ability of state and local governments to raise taxes, particularly on property. Proposition 15 would eliminate the prohibitions on increasing the tax rates on commercial properties. This will lead to likely billions more in revenue for the state as a result of significant tax increases.

But you won’t find any references to tax increases in Becerra’s just-released summary. Instead, the title of Proposition 15 reads that it “increases funding for pubic schools, community colleges, and local government services by changing tax assessment of commercial and industry property.” To be fair, the full description of the bill does make it clear that the state expects there will be a “net increase in annual property tax revenues of $ 7.5 billion to $ 12 billion.” But rather than presenting Proposition 15 as a tax increase, it’s deliberately framed as some sort of market correction, saying it will require that these properties “be taxed based on current market value.”

Dan Walters, a longtime columnist on Sacramento politics, noted that Proposition 15 is sponsored by labor groups and endorsed by the Democratic Party, of which Becerra is a member and leader. By shielding and downplaying the tax increase that will result from the initiative passing, he is attempting to influence how voters perceive it in a way that favors his party.

By the same token, but in the opposite direction, consider Proposition 22. This ballot initiative is a response to the passage of A.B. 5 in 2019. A.B. 5 severely constrains the ability of individuals in California to work as freelancers and independent contractors and forces employers to hire them as employees and pay them benefits. It’s a deliberate attack on rideshare services and the entire gig economy, but the bill was written so broadly it has hampered the work of freelance writers, musicians, beauticians, and thousands of citizens who actually don’t want to have employers and want more control of their own hours and working conditions. All of this is for the benefit of labor unions in California, which see the gig economy as undermining their influence and membership.

The entire law is terrible and should be tossed out, but failing that, companies like Lyft, Uber, DoorDash, and drivers have introduced Proposition 22 to specifically exempt rideshare and delivery drivers from A.B. 5. But that would not be what unions want, and Becerra gets thousands of dollars in donations from unions representing both state and private sector employees.

This rephrasing makes it appear that the bill takes away something that these people are entitled to rather than clearly explaining that what Prop. 22 does is allow drivers to continue working as freelance contractors and not as full-time employees. In exchange, they’ll be giving up certain benefits that full-time employees receive.

Now, of course, reading the ballot initiative itself will explain more accurately what it does, and we’ll no doubt be getting massive media blitzes from both sides. But that title has been specifically written to make it appear as though a benefit is being forcibly taken away from these drivers, even though many drivers would rather be gig workers for any number of reasons.

This isn’t the first time Becerra has made such a change, and he’s not the first attorney general to use his authority this way. Becerra used his position two years ago to describe a proposition scaling back gas taxes as “eliminat[ing] certain road repair and transportation funding.”

When Sen. Kamala Harris (D–Calif.), possibly soon to be named Joe Biden’s vice-presidential pick, served as attorney general, we saw her do something similar. When some pension reformers introduced a ballot initiative in 2015 to try to do something about the financial ticking time bomb of public employee pension debts consuming municipal budgets, Harris used her position to change the way it was framed.

Her office summarized the bill by saying that it “eliminates constitutional protections for vested pension and retiree healthcare benefits for current public employees… .” This made it appear as though the proposition would cause current public employees to lose their current pensions and healthcare benefits. But that simply wasn’t true. It allowed cities and voters more flexibility to decide how or whether to expand pension offerings in the future. But it specifically stated that it did not scale back any existing benefits or agreements for public employees.

But the unions, of course, hated the proposition, and Harris’ description was for their benefit. The backers of the proposition fought the rewording but failed. They then yanked the initiative rather than wage a costly battle to overcome the way the proposition had been presented to voters.

Kevin Kiley, a Republican state assemblyman from Rocklin, has proposed taking the power to summarize ballot initiatives away from the attorney general and handing it over to the state’s Legislative Analyst’s Office, which has a pretty solid history of accurately and impartially describing the content and potential consequences of bills and propositions.

Kiley’s proposed amendment to the state’s constitution has, predictably, gone absolutely nowhere. Maybe he should consider a ballot initiative.

Brickbat: Pay as You Don’t Go