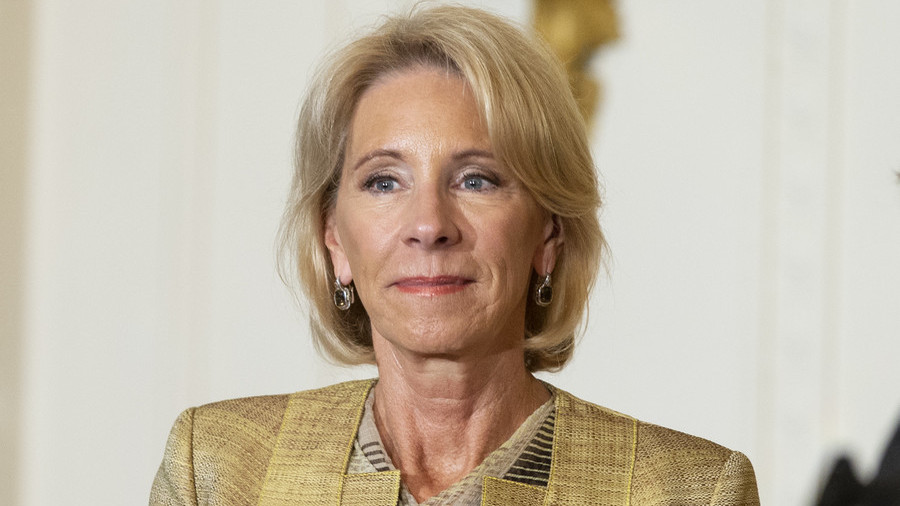 Education Secretary Betsy DeVos’ $ 40 million yacht was reportedly cut loose from a marina in northern Ohio and set adrift. The yacht slammed into a dock, causing over $ 5,000 in damage.

The 163ft vessel, named ‘The Seaquest’ had been moored on Lake Erie, and was cut loose in the early hours of Sunday morning. The crew notified police and tried to get the runaway yacht under control, but not before it hit a dock, causing between $ 5,000 and $ 10,000 in damage, reported the Toledo Blade.

‘The Seaquest’ can accommodate 24 guests and crew, and is one of 10 boats owned by the DeVos family. Sunday’s collision has left the boat gouged and scratched.

Police officers are investigating the incident and the reasons behind it, and are searching for surveillance video to identify the culprits.

In her tenure as Secretary of Education, DeVos has been roundly criticized for her policies, including cutting student loan aid earlier this year, refusing to bend to the social justice brigade’s demands for transgender bathrooms in schools, and for her support of ‘school choice; pushing private education as a remedy to America’s failing public school system.

👿PURE EVIL👿@BetsyDeVos plans to get rid of Obama‘s loan forgiveness rules for students DEFRAUDED by for-profit colleges, essentially giving #immunity to FRAUDULENT “schools,” while denying their victims a realistic path for debt relief.🤬#FireDevoshttps://t.co/K6hz9MWL0m

Education Sec. Betsy DeVos only cares about some students.

She won't even pretend to care about transgender students and has ordered the Department of Education to reject all trans students discrimination complaints out of hand.#WeJustNeedToPee

Critics also argue that DeVos is out of touch with ordinary Americans. While a high school teacher in the US takes home a median salary of $ 58,000 per year, DeVos is a billionaire through inheritance, having married Dick DeVos, former CEO of pyramid-scheme marketing company Amway. The DeVos family is worth $ 5.4 billion, making it the 107th richest in America.

Members of the Trump administration have been subject to harassment and heckling over the last number of months as discontent grows over the White House’s immigration policies, with Rep. Maxine Waters (D-Cal) even publicly encouraging such actions.

Since Waters turned up the rhetoric, Senate Majority Leader Mitch McConnell has been publicly threatened and harassed twice, protesters have left a decaying animal carcass on a senior Homeland Security official’s porch and Florida Attorney General Pam Bondi has been spat on and screamed at by a mob in a movie theater, among several other incidents.