Chicago has declined in population for the third year in a row, according to the census, marking it as a… 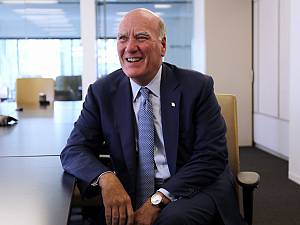 Chicago has declined in population for the third year in a row, according to the census, marking it as a significant outlier in America’s urban centers. It’s saddled with enormous debts, partly due to unpaid pension obligations, and the city is trying everything from taxing sodas and human waste, to holding citizens’ cars for ransom, in order to make money.

One candidate to succeed Mayor Rahm Emanuel (soon to be heading for the exit himself) has a novel idea to fix the city’s financial woes: stealing from the neighbors.

Candidate Bill Daley, son of former Mayor Richard J. Dailey, brother of former Mayor Richard M. Daley, and Emanuel’s successor as President Barack Obama’s chief of staff (can Chicago’s political dynasty get any more incestuous?), is proposing a commuter tax to try to get more money from suburbanites who work in the city of Chicago. “We have to find new revenues, and everything is on the table,” he said in a speech.

A city inspector in 2010 determined that a 1-percent commuter tax could potentially raise $ 300 million dollars. Except, the Chicago Tribune notes that when Philadelphia instituted a commuter tax, it saw job losses, and other cities who have done the same “are generally considered economically stagnant and have lost a substantial percentage of their populations since 1950.”

Yet, when asked if he thinks a commuter tax would drive business out of the city, Daley said he didn’t think it would.

It’s a baffling response given Chicago’s current trend of population loss, one matched by the surrounding areas and the state of Illinois. Why would you even think about giving people another reason to avoid going to the city? Why would you think people would accept this given that the current economic climate is already driving people out the door?

Adding a bit more absurdity is the fact that Daley’s plan to deal with Chicago’s crime problem is to spend even more money on a new department at City Hall to fight crime. That means more city government employees and therefore even more public employee pension obligations! (Oh, and he’s blaming the crime problems on not having enough gun control.)

Daley did say that he was also potentially supportive of changes to the Illinois state constitution that currently prevent the state and cities from scaling back any pensions or benefits for government employees, a rule that is driving the state to ruin. But in the absence of that change, adding to the pension crisis via a new city bureaucracy and then trying to get even more money from a reduced population seems remarkably irresponsible.

The Oppressive Mask “Mandates” Finally Go Up In Flames

As ‘Election Day’ Becomes ‘Election Week,” Something Has Broken In ‘Our Democracy’