Hundreds of Muslims in north-western China are engaged in a standoff with authorities to prevent their mosque from being demolished…. 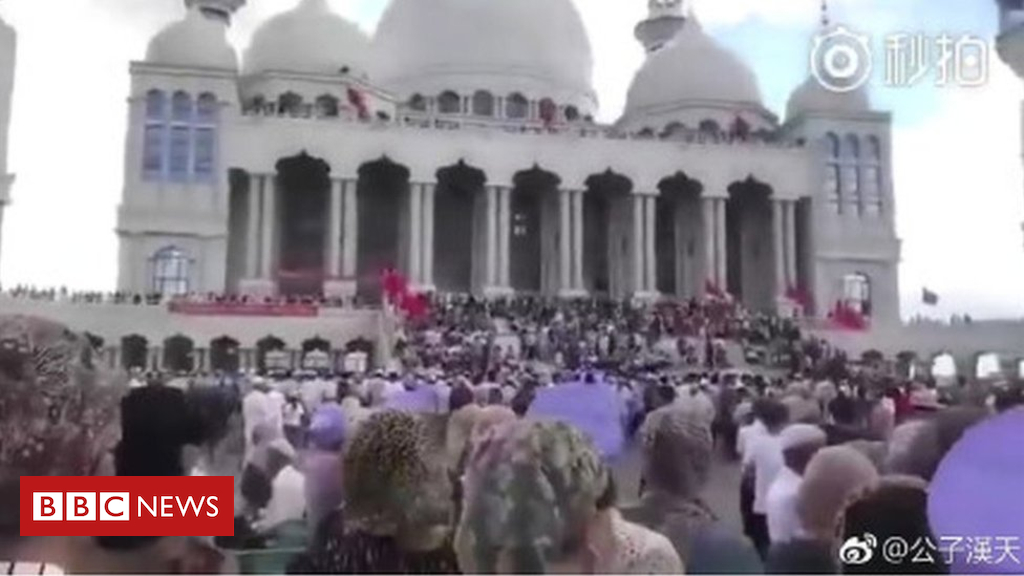 Hundreds of Muslims in north-western China are engaged in a standoff with authorities to prevent their mosque from being demolished.

Officials said the newly built Weizhou Grand Mosque in the Ningxia region had not been given proper building permits.

But worshippers refused to back down – one resident said they “won’t let the government touch the mosque”.

China is home to some 23 million Muslims, and Islam has been prominent in Ningxia for centuries.

But rights groups say there is increasing official hostility towards Muslims in China, and foreign religious influences in particular.

The mosque, which has several soaring minarets and domes, is built in a Middle Eastern style.

For centuries Hui Muslim mosques had been built in a more Chinese style, and it appears that the new structure is viewed by the local government as an example of a growing Arabisation of Chinese Islam, the BBC’s China correspondent Stephen McDonell reports.

How did the protests begin?

Officials had on 3 August posted a notice that the mosque would be “forcibly demolished” as it had not been granted the necessary planning and construction permits.

The notice was shared online among the ethnic Hui Muslim community, according to Reuters news agency.

Many questioned why authorities did not stop construction of the mosque, which took two years to complete, if it had not been granted relevant permits, according to the Hong Kong-based South China Morning Post newspaper.

Protests were held outside the mosque on Thursday and continued into Friday, say the reports. Pictures circulating on Chinese social media showed large crowds gathering outside the large white building.

One resident said talks between the Hui community and the government had reached an impasse.

“We’re just in a standoff,” the resident, who withheld his name, told the Post. “The public won’t let the government touch the mosque, but the government is not backing down.”

It remains unclear if the original plan to begin the demolition on Friday will go ahead, or if a compromise has been reached.

An official from the local county’s Islamic Association said that the mosque would not be demolished entirely. He told Reuters the government only wanted the structure “renovated to reduce its scale”.

There has been no comment so far in Chinese state media on the case.

Can you freely practise religion in China?

Christian churches for example, have in the past been forced to remove crosses from their roofs, after the government said the symbol broke planning rules.

In recent years, the atheist Chinese Communist Party has become particularly wary of foreign religious influences and authorities have embarked on a campaign to “sinicise religion” – ie make it more Chinese.

As part of that, they have targeted unofficial “house churches” connected to overseas missions where millions of Chinese Christians worship.

While Hui Muslims have largely been well-integrated and left mostly free to practise their religion, they have watched as Uighur Muslims in the western Xinjiang region have faced growing government pressure.

Rights groups say citizens in Xinjiang are subject to increasingly intrusive methods of government surveillance and control, with many punished for “extremist” behaviour like wearing veils in public places, or refusing to watch public radio and TV programmes.

Thousands of Uighurs are also believed to have been forcibly sent to “education camps”. According to Human Rights Watch, detainees are forced to renounce their ethnic and religious identities.

But the current move to demolish the Ningxia mosque is indication that the government is now looking to extend control over other Muslim ethnic minorities, says rights group Amnesty International.

Earlier this year, in neighbouring Gansu province, children under 16 in the region of Linxia were banned from religious activities, in a move that alarmed Hui imams.

“It’s clear that the Chinese government’s hostility towards Muslims in China is not only limited to Uighurs,” researcher Patrick Poon told the BBC.

“Hui Muslims are generally considered less vulnerable to crackdowns, but this incident proves that the government is determined to use a holistic and heavy-handed approach towards all Muslim ethnic minorities in China.”