Princeton, New Jersey (Scheerpost) — Two of the rebels I admire most, Julian Assange, the WikiLeaks publisher, and Roger Hallam, the…

Princeton, New Jersey (Scheerpost) — Two of the rebels I admire most, Julian Assange, the WikiLeaks publisher, and Roger Hallam, the co-founder of Extinction Rebellion, are in jail in Britain. That should not be surprising. You can measure the effectiveness of resistance by the fury of the response. Julian courageously exposed the lies, deceit, war crimes and corruption of the ruling imperial elites. Roger has helped organized the largest acts of mass civil disobedience in British history, shutting down parts of London for weeks, in a bid to wrest power from a ruling class that has done nothing, and will do nothing, to halt the climate emergency and our death march to mass extinction.

The governing elites, when truly threatened, turn the rule of law into farce. Dissent becomes treason. They use the state mechanisms of control – intelligence agencies, police, courts, black propaganda and a compliant press that acts as their echo chamber, along with the jails and prisons, not only to marginalize and isolate rebels, but to psychologically and physically destroy them. The list of rebels silenced or killed by ruling elites runs in a direct line from Socrates to the Haitian resistance leader Toussaint L’Ouverture, who led the only successful slave revolt in human history and died in a frigid French prison cell of malnutrition and exhaustion, to the imprisonment of the socialist Eugene V. Debs, whose health was also broken in a federal prison. Rebel leaders from the 1960s, including Mumia Abu Jamal, Sundiata Acoli, Kojo Bomani Sababu, Mutulu Shakur and Leonard Peltier, remain, decades later, in U.S. prisons. Muslim activists, including those who led the charity The Holy Land Foundation and Syed Fahad Hashmi, were arrested, often at the request of Israel, after the hysteria following 9/11, and given tawdry show trials. They also remain incarcerated.

Resistance, genuine resistance, exacts a very, very high price. Those in power drop even the pretense of justice when they face an existential threat. Most rebels, like Ernesto “Che” Guevara, and the tens of thousands of rebels the U.S. has had kidnapped, disappeared and brutally tortured and killed throughout American history end up as martyrs.

Once a rebel is caged the state uses its absolute control and array of dark arts to break them. Julian, whose extradition hearing is underway in London, and who spent seven years trapped as a political prisoner in the Ecuadorean Embassy in London, is taken from his cell in the high security Belmarsh Prison at 5:00 am. He is handcuffed, put in holding cells, stripped naked and X-rayed. He is transported an hour and a half each way to court in a police van that resembles a dog cage on wheels. He is held in a glass box at the back of court during the proceedings, often unable to consult with his lawyers. He has difficulty hearing the proceedings. He is routinely denied access to the documents in his case and is openly taunted in court by the judge.

It does not matter that Julian, being prosecuted under the 1917 Espionage Act, is not a U.S. citizen. It does not matter that WikiLeaks, which he founded and publishes, is not a U.S.-based publication. The ominous message the U.S. government is sending is clear: No matter who or where you are, if you expose the inner workings of empire you will be hunted down, kidnapped and brought to the U.S. to be tried as a spy and imprisoned for life. The empire intends to be unaccountable, untouchable and unexamined. 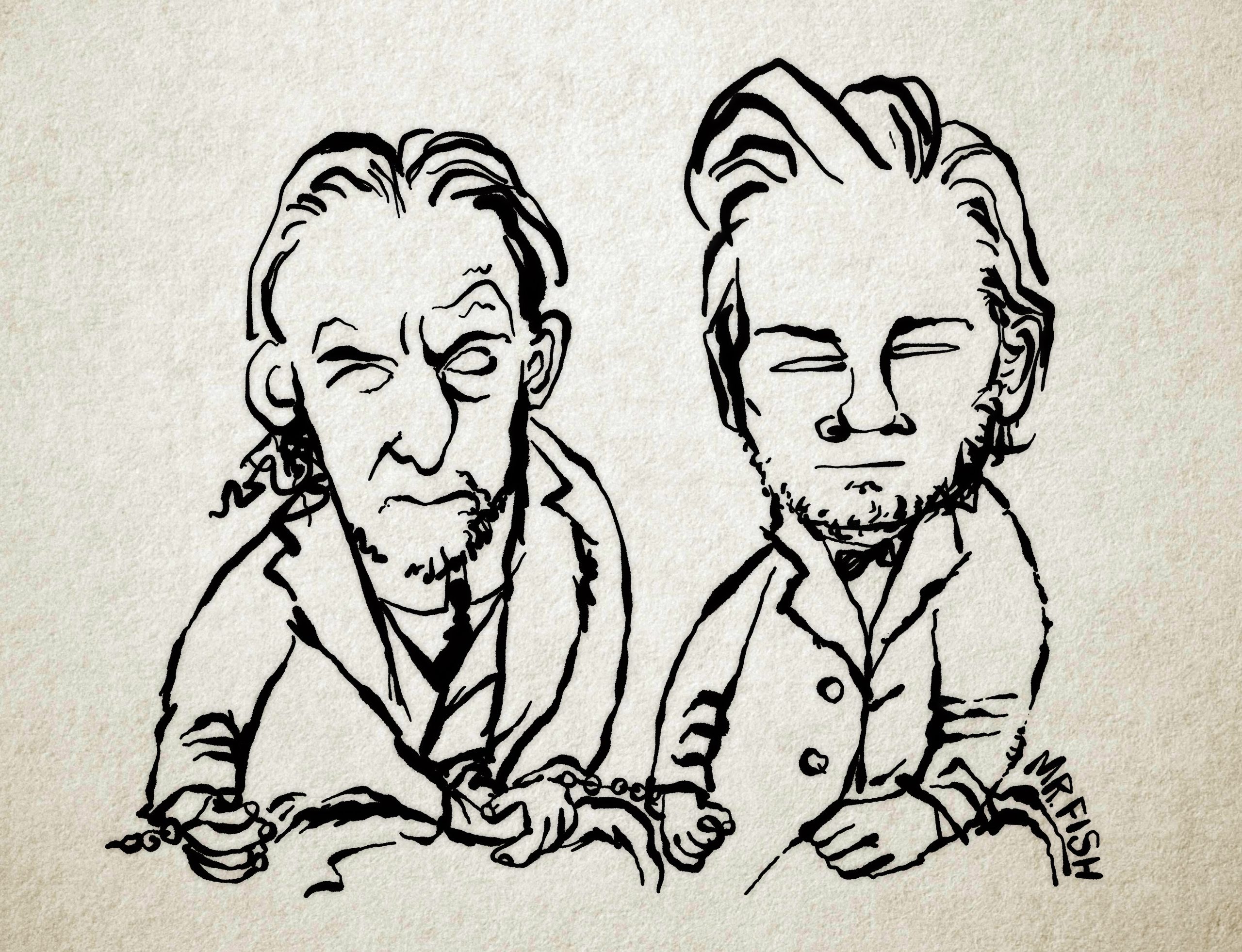 Illustratin by Mr. Fish for Scheerpost

The U.S. created in the so-called “war on terror” parallel legal and penal codes to railroad dissidents and rebels into prison. These rebels are held in prolonged solitary confinement, creating deep psychological distress. They are prosecuted under special administrative measures, known as SAMs, to prevent or severely restrict communication with other prisoners, attorneys, family, the media and people outside the jail. They are denied access to the news and other reading material. They are barred from participating in educational and religious activities in the prison. They are subject to 24-hour electronic monitoring and 23-hour lockdown. They must shower and go to the bathroom on camera. They are permitted to write one letter a week to a single member of their family, but cannot use more than three pieces of paper. They often have no access to fresh air and must take the one hour of recreation in a cage that looks like a giant hamster wheel.

The U.S. has set up a segregated facility, the Communication Management Unit, at the federal prison in Terre Haute, Ind. Nearly all the inmates transferred to Terre Haute are Muslims. A second facility has been set up at Marion, Ill., where the inmates again are mostly Muslim but also include a sprinkling of animal rights and environmental activists. Their sentences are arbitrarily lengthened by “terrorism enhancements” under the Patriot Act. Amnesty International has called the Marion prison facility “inhumane.” All calls and mail – although communication customarily is off-limits to prison officials – are monitored in these two Communication Management Units. Communication among prisoners is required to be only in English. The highest-level “terrorists” are housed at the Penitentiary Administrative Maximum Facility, known as Supermax, in Florence, Colorado, where prisoners have almost no human interaction, physical exercise or mental stimulation. It is Guantánamo-like conditions in colder weather.

Julian is already very fragile. His psychological and physical distress include dramatic weight loss, severe respiratory problems, joint problems, dental decay, chronic anxiety, intense, constant stress resulting in an inability to relax or focus, and episodes of mental confusion. These symptoms indicate, as Nils Melzer, the United Nations’ special rapporteur on torture who met and examined Julian in prison has stated, that he is suffering from prolonged psychological torture.

If Julian is extradited to the U.S. to face 17 charges under the Espionage Act, each carrying a potential 10 years, which appears likely, he will continue to be psychologically and physically abused to break him. He will be tried in the burlesque of a kangaroo court with “secret” evidence, familiar to Black and Muslim radicals as well as rebels such as Jeremy Hammond, sentenced to 10 years in prison for hacking into the computers and making public the emails of a private security firm that works on behalf of the government, including the Department of Homeland Security, and corporations such as Dow Chemical.

Roger is being held in Pentonville Prison in London which was built in 1842 and is in disrepair. He is charged with breaking bail conditions over an action that saw activists throw paint on the walls of the four major political parties, as well as conspiracy to cause criminal damage. A Green Party member leaked to the British police a recorded Zoom discussion Roger was having with three other members of Burning Pink, an anti-political party organized to create citizen assemblies to replace ruling governing bodies, as they discussed upcoming actions. The homes of the four activists on the Zoom meeting – Roger Hallam, Blyth Brentnall, Diana Warner, Ferhat Ulusu and Anglican priest Steven Nunn – were raided on August 25. Their electronic devices were confiscated by police and they were arrested.

Roger is housed in a dirty, vermin-infested cell and denied books and visitors. A vegan, he is forced to live on a diet of cold cereal and bread. On many days there is no hot food served in the prison. Violent altercations within the prison are commonplace. The overcrowded cells often lack lighting and heat. He has no change of clothes and has been unable to wash the clothes he is wearing for weeks. He stuffs bed sheets and paper in the cracks of the door to block mice and cockroaches. The toilet in his cell has no seat, is covered in excrement and does not flush properly. He goes days without access to the outside. His reading glasses are broken. He is waiting on a request for tape to fix them. The COVID-19 pandemic is in the prison. Two of the staff have died from the virus. Roger could be imprisoned in these conditions until February if he is denied bail in a hearing scheduled for Tuesday.

Roger’s arrest came as Extinction Rebellion was planning the blockade of the printing presses of News Corps Printworks, which prints the newspapers The Times, Sun on Sunday, Sunday Times, The Daily Mail and The London Evening Standard. The blockade took place on September 4 to protest the failure of the news outlets to accurately report on the climate and ecological emergency. The blockade delayed distribution of the papers by several hours.

“The days of standing up to tyranny have long faded,” Roger writes from prison. “The life-and-death struggle against Hitler and fascism is consigned to the history books. Today’s liberal classes believe only in one thing: maintaining their privilege. Their one priority is power. The number one rule is: preserve our careers, our institutions at all cost. The historical rule number one of fighting evil is the willingness to lose your career and to risk the closing down of your institution. The prospect of death and destruction is lost in a postmodernist haze. Leadership has decayed into sitting behind a desk, following public relations protocols (otherwise known as lying). Leading from the front, the first to go to prison Martin Luther King-style died with the passing of the World War II generation.”

“The game is up,” Roger continued. “The old alliance with the liberal classes is dead. New forms of revolutionary initiative and leadership are rising up. Members of the new political party Burning Pink have thrown paint at the doors of the NGOs and political parties calling for open dialogue and public debate. The response, true to form, has been a lethal and deafening silence. We are now in prison from where I write this article after a Green Party member recorded a Zoom call and passed it to the police. We have not been let out for exercise for the first five days. We have no kettle, no pillows, no visits. But we don’t give a shit. We are doing something about Evil.”

Feature photo | Protesters move a banner at the Central Criminal Court, the Old Bailey, in London, Sept. 21, 2020, as the Julian Assange extradition hearing to the US continues. Frank Augstein | AP

Chris Hedges is a Pulitzer Prize–winning journalist who was a foreign correspondent for fifteen years for The New York Times, where he served as the Middle East Bureau Chief and Balkan Bureau Chief for the paper. He previously worked overseas for The Dallas Morning News, The Christian Science Monitor, and NPR. He wrote a weekly column for the progressive website Truthdig for 14 years until he was fired along with all of the editorial staff in March 2020. [Hedges and the staff had gone on strike earlier in the month to protest the publisher’s attempt to fire the Editor-in-Chief Robert Scheer, demand an end to a series of unfair labor practices and the right to form a union.] He is the host of the Emmy Award-nominated RT America show On Contact.

On Israel’s Bizarre Definitions: The West Bank is Already Annexed