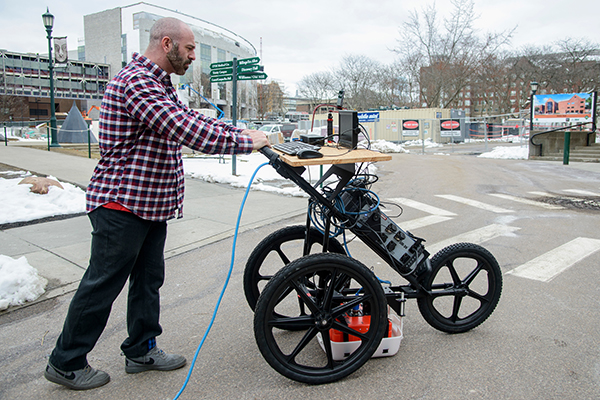 Digging a hole in most major cities — for new construction or infrastructure repair — is no minor undertaking. It can require a dozen or more separate utilities to inspect the ground under the dig site for a welter of obstructions, such as water, sewer and gas pipes, electric lines and electric generators — some so old they don’t appear on city maps. The permitting process can take 18 months or more. Thanks in part to a US Ignite grant, National Science Foundation-funded researchers are refining an advanced ground penetrating radar, or GPR, system that can peer deep underground to detect buried infrastructure, some of it dating to the mid-19th century, and create scans of what it sees. The researchers are able to locate scans in a geographic space the program can remember and knit them together into a map — the cognitive part of the project — by using a common 3-D scanning smartphone app. The phone then converts the grainy radar scans to clearly recognizable, nuanced, 3-D objects using augmented reality software, commonly used for video game development. The researchers hope that the technology could enable inspectors to use augmented reality goggles or a specially equipped wireless device to walk over a designated area, look into the device, and see underground obstacles in detail.

2019 Preview: Gravitational waves will be discovered every few weeks

Enjoy a season of science with our 2018 UK festival picks

Zambia to kill 2,000 hippos because they might spread anthrax