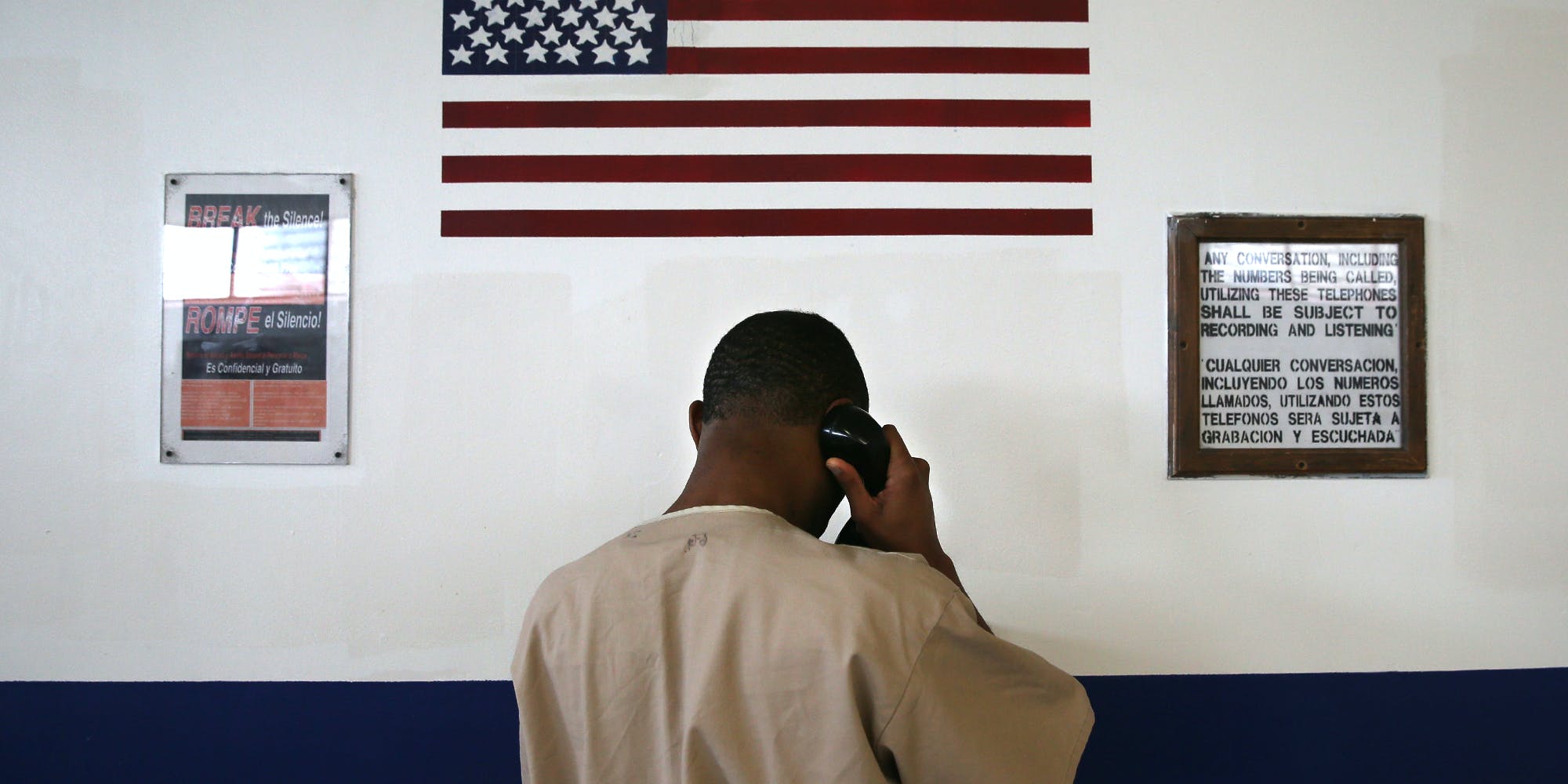 Connecticut lawmakers are gearing up for their second attempt at passing a bill that would make prison phone and video calls free for incarcerated people and their loved ones.

A similar bill, introduced by state Rep. Josh Elliott, a progressive elected in 2016, and drafted by Worth Rises, a national nonprofit focused on ending the influence of commercial interests in the criminal justice system, advanced in 2019 and passed out of the state’s House Judiciary Committee. But around the same time, Securus Technologies, the national prison telecommunications corporation that Connecticut has contracted with since 2012, hired two lobbyists on a $ 40,000 retainer to fight the bill. Under pressure from its parent company, Platinum Equity, Securus eventually backed off, but with two weeks left in the session and stonewalling from the state’s Democratic Gov. Ned Lamont, it was too late.

Since that battle, Connecticut now boasts a new notorious title: It is now the most expensive state in the country for prison phone calls, after Arkansas renegotiated its rates. A 15-minute phone call between an incarcerated person in Connecticut and a family member costs nearly $ 5, at $ 0.21-$ 0.325 per minute. Rhode Island, its next-door neighbor for example, charges $ 0.029 per minute.

Advocates are feeling optimistic they have a better shot this time around and can make Connecticut the first state in the nation to eliminate the charges.

“There are very specific things that held up this bill in the past,” said Elliott, pointing to Securus’s lobbying in 2019, which required advocates to scramble at the end of the session. “That meant that we were chasing our tail a bit until Securus formally and publicly backed out of lobbying against our bill, recognizing what it looks like to be a contractor with the state while lobbying for their interests,” he said.

John Trombetta, a spokesperson for Securus, confirmed with The Intercept that they will not be lobbying on the bill this year and added that they’ve been working with Connecticut to offer different funding models, “including options to reduce rates and commissions and even rates that do not include commissions.”

Also this year, advocates have a powerful state senate sponsor in President Pro Tempore Martin Looney, who has introduced a version of the bill. “Having Looney be an introducer is a major step forward,” said Elliott.

In a February press briefing, Looney pointed to the fact that Connecticut is a state that uses commissions from its prison phone calls as a way to subsidize other parts of its corrections system. “That is really not an appropriate use,” he said.

Connecticut families spend over $ 14 million per year to talk to their loved ones behind bars, and under the negotiated contract, the state takes $ 7.7 million in kickbacks, with the rest going to Securus. In 2019, a spokesperson for the state’s judicial branch testified that losing prison phone call commission fees would mean the state would have to eliminate adult probation office positions.

Looney said he was supporting the legislation as a racial and economic justice priority. One study found more than one in three survey participants went into debt to cover phone and visitation costs, and that the costs landed disproportionately on Black and Latino women.

Decades of research have shown that keeping in touch with loved ones while incarcerated significantly improves an individual’s chance for successful reentry when they are released. “To sustain that contact becomes really costly every month, and the prisons tend to be located in remote, rural areas of the state,” said Looney. “Most prisoners come from the urban areas, distance to travel is hard and very expensive. … Many do not even have transportation.”

Lamont, who grew his personal fortune through the telecommunications industry, released his budget earlier this month and proposed allocating just $ 1 million to reduce the cost of prison phone calls. The Connecticut Connecting Families coalition blasted the governor for “backtracking,” noting that $ 1 million is just 20 percent of what Lamont had committed to in an address last year, before the pandemic.

Lamont’s office did not return multiple requests for comment on his budget proposal, or on whether the governor would support the phone justice legislation this year.

While it’s not yet clear where the money would come from to make up for the millions that Connecticut currently relies on in call commissions, Kevin Coughlin, a spokesperson for Looney, told The Intercept that those budgetary considerations will be hashed out over the next two months or so in the legislative session.

Advocates noted that Lamont recently announced the state will be closing three prisons in the coming months, to “right-size” Connecticut’s correctional system. The first one announced, Northern Correctional Institution, will offer millions in savings. Connecticut is also projecting a $ 70 million budget surplus this year, despite the effects of the Covid-19 pandemic.

The pandemic has shined new light on the exorbitant rates that prison-phone corporations charge for phone and video calls, as in-person visitation was largely impossible over the last year.

On the federal level, in the first stimulus package authorized by Congress, lawmakers included language to make all phone calls free from federal facilities throughout the pandemic. Bianca Tylek, executive director of Worth Rises, said while they have worked to build allies in Congress, they were still surprised to see that measure included in the CARES Act.

In late March, Rep. Bobby Rush, D-Ill., also introduced a bill to expand the FCC’s authority to regulate in-state prison phone calls (where most prison phone calls occur) and bar state and local governments from collecting commissions from the calls. It was included in the HEROES Act that passed the House in May, and Tylek called it “the most significant federal legislative vote on prison phone justice in history.”

There was momentum to push companion legislation through the Senate too, with 17 Democratic Senators urging it as a priority, led by Sens. Amy Klobuchar and Tammy Duckworth. But the real gatekeeper in the Senate was Republican Sen. Roger Wicker, chair of the Commerce, Science, and Transportation Committee, and he would not commit to supporting the bill.

Since Democrats took control of the Senate in January, Wicker is no longer chair, and Democratic Sen. Maria Cantwell of Washington is now leading the committee. Cantwell was not one of the 17 Democrats to sign the letter last year urging the passage of the phone justice bill, and her office did not return multiple requests for comment.

This past summer, in another development that surprised longtime advocates, then-FCC Commissioner Ajit Pai, a Republican, announced a new proposed rule for lowering the rates of interstate prison calls and for capping rates of international prison calls for the first time. Pai also urged state utility commissioners to take action on intrastate calls, which he rightly noted disproportionately impacts Black Americans.

With the election of Joe Biden, Pai is now gone, but the new Acting FCC Chair, Jessica Rosenworcel, has long supported efforts to address the high cost of prison communications. Earlier this year, in response to Pai’s proposed rule, Rosenworcel said the FCC “should be embarrassed” that it has taken them so long to address this problem.

An FCC spokesperson told The Intercept that “addressing the high costs of phone service for the incarcerated and their families is a priority for the Acting Chairwoman. She hopes to move forward with the FCC’s effort to curb these rates in the near future.”

Mike Gwin, a spokesperson for the Biden administration, did not have comment on the FCC specifically, but he pointed to Biden’s campaign pledge to support the passage of Duckworth’s legislation that would expand the FCC’s authority to regulate prison phone calls. His campaign website promised to “crack down on the practice of private companies charging incarcerated individuals and their families outrageously high fees to make calls.”