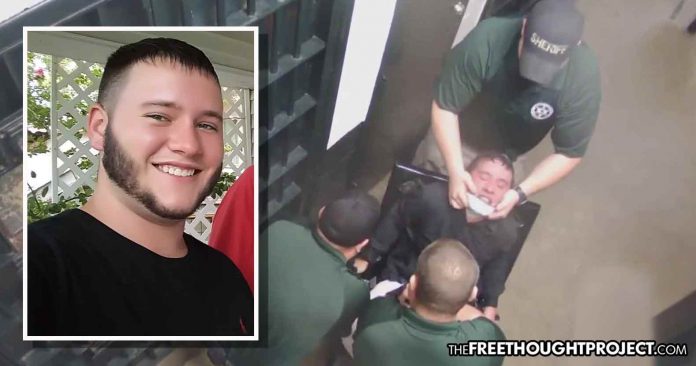 Ashland City, TN — Two police officers who strapped an 18-year-old in a restraint chair and tortured him with a taser were arrested and charged with multiple crimes last June. The horrifying video was so damning that the normal process of sweeping it under the rug was not an option. Sadly, however, the trial for the cop who did the torturing, just concluded last week and ended in a mistrial.

In September 2018, Sgt. Gary Ola accepted a plea agreement for two counts of making false statements to FBI agents in connection with the incident. He has yet to be sentenced.

Bryant pleaded not guilty and somehow at least one juror agreed with him.

“It was a sad story on both sides, but the jury could not find that Bryant violated the existing jail Taser policy as it existed at the time,” said Peter Strianse, Bryant’s attorney.

Apparently, savagely torturing a completely restrained teenager—repeatedly—with a taser, was fine and dandy according to the jail’s policy.

As TFTP reported, the nightmare for the victim, 18-year-old Jordan Norris began in November 2016, when a SWAT team raided his home because he was allegedly selling drugs. Selling willing people a substance they want to voluntarily ingest in no way justified the treatment Norris would receive.

After Norris was arrested, he had somewhat of a mental breakdown and began banging his head against the cell door. So, police dragged him out of his cell and strapped him in a restraint chair.

In the extremely disturbing video, Cheatham County Sheriff’s Deputies are seen holding Norris down with a gag while Bryant sadistically and repeatedly deploys the taser—at one point shocking Norris of nearly half a minute. Naturally, Norris squirmed as 50,000 volts ran through his body. His movement seemed to provoke the deputies who responded with more taser strikes.

“Are you ready?” Bryant asked Norris, who appeared to ready himself for the surge of electricity.

“Would you like to comply?” Bryant asked. Norris’s response was inaudible.

“No you won’t,” Bryant said as sadistically tortured the teen.

“Stop resisting!” one of the deputies yelled at Norris, who was strapped into restraints.

At one part in the video, you can hear Bryant tell Norris, “I’ll keep doing that until I run out of batteries.”

Norris said he remembered deputies asking him, “Do you want me to do it again? We got a whole bunch of batteries we can drain into you pretty much. We will do it over and over until we have no more.”

For three hours Norris remained in the chair—apparently, all fine, according to the jail’s policy.

When Norris was released from prison, he was covered in burn marks from the taser. Somehow he made it through the torture without his heart stopping.

Tony Chapman, Norris’ stepfather, said he gave the police the benefit of the doubt when he saw his stepson’s wounds. He thought Norris must’ve been resisting in some way. However, once they saw the video, it was entirely clear that Norris was in no way resisting — as he was buckled down in a restraint chair.

“I said, ‘Jordan what is that?’ It looked like he had the measles. And he said, ‘That’s where they tased me.’ I could not wrap my head around that,” William Chapman said.

“When I found that he was actually strapped to a restraint chair, it was even more mind boggling. It didn’t make any sense,” Chapman said.

When you watch the video below, you will likely agree with Chapman. What the deputies were doing to Norris with the taser did not make any sense at all. Why on earth would they choose to torture this young man repeatedly with a taser?

Thanks to a post on the sheriff’s department’s Facebook page, we now have a possible answer to that question. The sheriff had a personal vendetta against Norris and took to publicly taunting him.

In the Facebook post, the sheriff called Norris “a drug dealer by trade and on the fast track to live the thug life.” The sheriff even noted that Norris “peed a little bit,” while being handled by SWAT.

Sheriff Mike Breedlove even stood by his Facebook comments, claiming that they normally make humorous posts after busting people for selling substances deemed illegal by the state.

After he refused to back down for taunting Norris, the sheriff went on to justify the sadistic actions of his deputies by stating that it was necessary. He said his deputies had to taser Norris over 40 times because he kept flinching.

Sadly, Norris was found dead in March 2018 in his home. Agents with the TBI investigated his death but never released their findings. His family released the autopsy report to News 4 which said his death may have been an overdose, but they also believe the tasing incident played a role in his death.

In the video below, you will watch — what looks like a scene out of Nazi Germany — however, this is taking place right in our backyard. When police can claim that torturing a man, who is restrained in a chair, is justified, the time for radical change is long overdue.

Now, it appears that the officers responsible for this sadistic madness will all walk away without any accountability whatsoever.

Who Are The Worst Perpetrators of Violence?