Spread the love      Tweet    Corruption within the American law enforcement system is rife. We are watching case after… 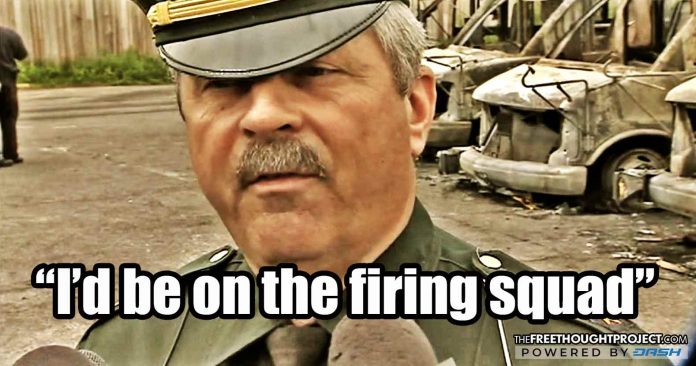 Corruption within the American law enforcement system is rife. We are watching case after case of ‘good’ cops attempting to hold their own accountable, only to be punished by the blue wall.

This blue code of protecting officers, no matter their crimes, is what’s driving a wedge between the police and the policed.

To affect positive change, the good cops must come forward and shine light on the darkness within their ranks. They must not be afraid to do so either. The Free Thought Project frequently seeks out these brave men and women, who are willing to do what’s right regardless of the repercussions.

One of these good cops who risked persecution and his career to expose his insanely racist and tyrannical police chief is Nathan Roohr, a patrol sergeant.

Thanks to Roohr’s bravery, Bordentown Township Police Chief Frank Nucera Jr. has been exposed for his history of brutal and racist policing. As NJ.com reports, federal prosecutors said Nucera can be heard in the recordings using the N-word to describe African Americans, and at one point saying they were “like ISIS, they have no value. They should line them all up and mow ’em down.”

The recordings are now part of a larger investigation into the former chief who has since been charged with a federal hate crime for allegedly beating a handcuffed teenager in 2016.

The beating of the teen was a “clear senseless, bigoted, hate-filled,” assault of a prisoner in custody, U.S. Attorney William E. Fitzpatrick said at a press conference in December.

According to the criminal complaint, Nucera grabbed the 18-year-old’s head and slammed it into a metal doorjamb. When the teen complained, Nucera hit him in the back of the head with his arm.

During the arrest, Nucera was apparently heard using racist slurs. This history of racist policing is what prompted Roohr to begin recording his chief.

Roohr then caught the chief claiming that he would have no problem executing black people after a black male was caught slashing the tires of a police vehicle.

“I wish that (n-word) would come back from Trenton and give me a reason to put my hands on him, I’m tired of ’em. These (n-word) are like ISIS, they have no value. They should line them all up and mow ’em down. I’d like to be on the firing squad, I could do it,” Nucera said, according to the complaint.

Nucera actually put some of this racist policy into place. According to the complaint, he ordered officers to bring police dogs to certain high school basketball games and to position vehicles near the gymnasium entrance to intimidate entirely innocent black fans—a move reminiscent of Nazi Germany.

For years, Nucera’s racist policies were carried out and were well known. According to the complaint, “Nucera has a significant history of making racist comments concerning African Americans.” However, most of the officers apparently had no problem with it. Not until Roohr crossed the thin blue line and became a good cop did anything happen.

However, as is common among police officers who are charged with crimes, when the investigation came to a head last year, Nucera was allowed to quietly retire and currently receives his pension of $ 105,992.76 — $ 8,832.73 per month — according to public records.

Hopefully this case is not swept under the rug and this disgraced cop is actually held accountable. If he is found guilty of both charges, he could spend the next 20 years in prison. Roohr has done his part to mend the gap between the police and the policed, now it is up the courts to keep it going.

NSA Vs. Tucker Carlson: Are We A Banana Republic?