Schenectady, NY — A Schenectady police lieutenant — who should’ve been fired and arrested multiple times — is still on the… 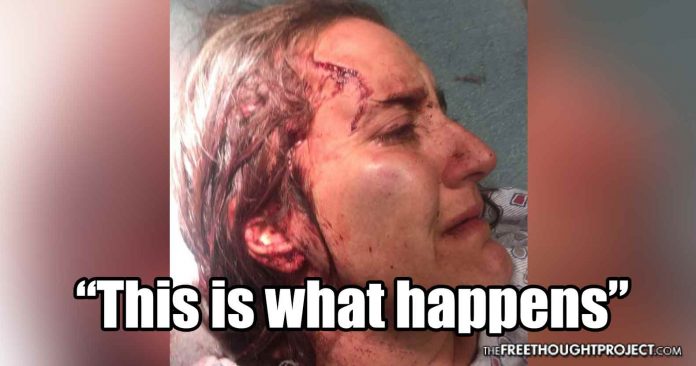 Schenectady, NY — A Schenectady police lieutenant — who should’ve been fired and arrested multiple times — is still on the job in spite of brutally attacking an innocent handcuffed woman, smashing in her head, and then lying on a report, claiming she attacked him. What’s more, after he split her head wide open, he took a picture of it so he could brag about it to his friends and fellow cops.

“This is what happens when someone hits one of my men,” Lt. Mark McCracken would say as he showed off his trophy photo, bragging about severely injuring an innocent handcuffed woman in the midst of an emotional breakdown.

Two officers, McCracken and Andrew MacDonald were identified in court filings for their role in the attack. Surveillance video in the room in which the assault took place captured the officers in their most heinous act. Cottone’s hands were cuffed behind her back when the attack happened.

As the Times Union reports:

Two cameras that captured footage of the incident did not have an audio feed. One of the tapes showed her acting agitated and talking constantly to officers who were in and out of the room where she was sitting on a bench.

That video also showed two officers rush toward Cottone who stood up as the officers grabbed her, lifted her up and then slammed her onto the bench. Blood streamed down the bench and onto the floor of the room as the officers quickly lifted Cottone and dragged her to the doorway, where she was placed on the floor of a hallway for more than 20 minutes. Several officers looked on as the incident unfolded.

After the officer was seen on video savagely slamming the woman down, police then accused Cottone of kicking them and charged her with harassment “as a means to conceal the actions of the police officers,” said attorney Kevin Luibrand.

Once prosecutors viewed the footage, the egregious harassment charge was dropped.

“We didn’t think there was any cause to charge her in the first place,” Schenectady County District Attorney Robert Carney said. “I reviewed the videotape … and I believe there was no cause to believe that she had committed the charge of harassment by kicking an officer.”

For viciously attacking an innocent handcuffed woman and then fabricating a story to justify their brutality, McCracken was given a five-day vacation in the form of unpaid leave. It’s unclear whether MacDonald had faced any discipline at all.

The internal affairs report summarized the encounter as follows: “(McCracken) pulling and swinging the feet out from (Cottone) while she was handcuffed caused (Cottone) to sustain the laceration to her head. … After the initial altercation (McCracken) hoists (Cottone) off of the bench and into the air by only her arms, which are still cuffed behind her back. He then carries her in this position out of the muster room and drops her onto her feet in the hallway in front of the Sergeants desk. These actions are egregious and placed (Cottone) at risk of injury. These techniques are not taught in training. A common technique used in this type of circumstance is a bar hammer or something similar. This use of force was excessive.”

Instead of being fired or charged for the incident described by police above, McCracken continued on at the department only to break the law again and receive yet another vacation.

In February, according to the Times-Union, McCracken was charged with intentionally violating an unrelated order of protection by approaching his estranged wife at the Union College hockey rink.

It appears that this problem cop has an affinity for targeting and harassing women and, instead of holding him accountable, the department he works for simply gives him time off. It is no wonder police in America cost taxpayers hundreds of millions in lawsuits while killing more than a thousand citizens every year—nearly all of which is done with impunity.

A Balanced Budget In 15 Years?…Don’t Hold Your Breath

What Are Socialism’s Dirty Secrets That Must Be Kept From America’s Youth?