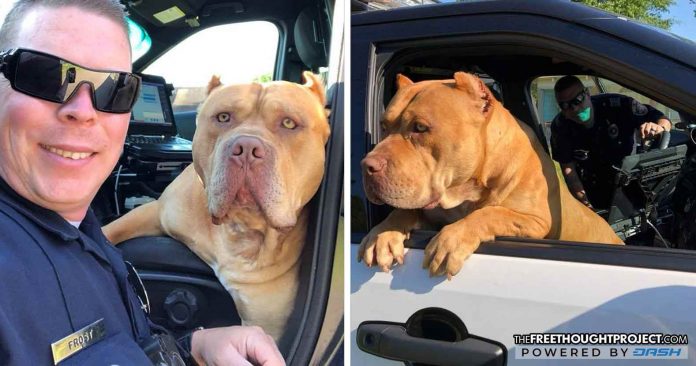 It is no secret that hundreds of innocent dogs are shot and killed by police officers in the United States every year, and while the horrific footage captured by body cameras creates public outrage for a moment, the majority of the officers who are responsible for murdering family pets never face charges for their actions.

Each officer who encounters a dog has a choice, and when the Texarkana Police Department received a report about a “vicious dog,” and Officer Travis Frost spotted a dog who matched the description, he could have approached the animal with his handgun drawn, waiting for the dog to make the slightest movement towards him to justify opening fire.

But instead, Frost chose to act like a rational human being. According to a Facebook post from Texarkana PD, when he saw the dog lying on a front porch, he whistled for the dog to come to him while leaving “the door of his patrol unit open so he could quickly jump back in if the dog was vicious and came after him.”

The dog responded by trotting towards the officer with his tail wagging, and Frost said that he was nothing but friendly. In fact, after Frost pet the dog for a few minutes, the dog made itself at home by jumping into the driver’s seat of the patrol car and waiting patiently while Frost took a few selfies until animal control arrived.

“While you should always be careful around any dog that you don’t know, you shouldn’t automatically assume that all Pit bulls are bad dogs,” Frost said. “They might be really loving like this guy was this morning.”

The internet loved it. The status from Texarkana PD has received nearly 47,000 shares and more than 96,000 likes. While there were a number of people who simply wanted to thank Officer Frost for his service or to comment on how handsome the dog was, there were also a significant number of comments from people who were thankful that this police call had not ended in another shooting.

“This seems like a decent cop, not one who is a coward and shoots animals and unarmed people. Promote officers like this and make them head of training,”Corey Shade wrote in the comments section.

Ana Campos noted that Officer Frost was smart to approach the dog by whistling first and then motioning for him to come closer, and she said she wishes more police departments would teach their officers to “learn to whistle first and not shoot. Shooting an animal is not justified and so many do.”

Grace Rubio also referenced the fact that the officer could have easily opened fire on the reportedly “vicious” dog, and she wrote, “Thank you, officer, for giving this dog a chance and not shooting this beautiful animal on the spot.”

“Shout out to Officer Frost for NOT shooting the dog as he was trotting towards him,” Scott Hovdal wrote. “I’m not being sarcastic, you wouldn’t believe the amount of senseless and unwarranted murders of this breed at the hands of Law Enforcement officers.”

While it may seem strange to think that Frost could have pulled out his gun and shot and killed a dog in a residential neighborhood when it was not threatening him, the fact is that it happens all the time, and the officers who are responsible rarely face consequences for their actions.

In a case from Chillicothe, Ohio, Officer Traevon Williams was stopping at a house for a follow-up investigation where he asked two young girls if their parents were home. The girls left the front door open and when the family Pitbull ran eagerly towards the front entrance to see who was visiting, Williams grabbed his gun and fired multiple rounds.

Not only did he endanger the lives of the children at the house and their neighbors but he was caught lying on his report of the shooting, and his department still fully supported his actions and claimed that his conduct was “within department policy.”

In a heartbreaking case from Hammond, Indiana, a pit bull died after she got out of her house and ran to greet a police car in the driveway. Before he had a chance to determine whether she was friendly or “vicious,” Officer Daniel Small pulled out his gun and opened fire on the dog within seconds.

Her owners attempted to save her, but the injuries she sustained from the shooting took her life. They revealed that she was eager to see a police car and the officer because she was rescued by police just two months earlier when she was another friendly pit bull posing for a photo in the front seat of a police car.

In an update to their status, Texarkana PD noted that the story of the dog rescued by Officer Frost has a rare happy ending, and after a night in the animal shelter, “Gold” was claimed by his owner the next day.

Who Owns The Fed? Are They To Blame For 40 Million Unemployed?

Why The ‘Covid Lockdowners’ Are Gunning For Dr. Atlas