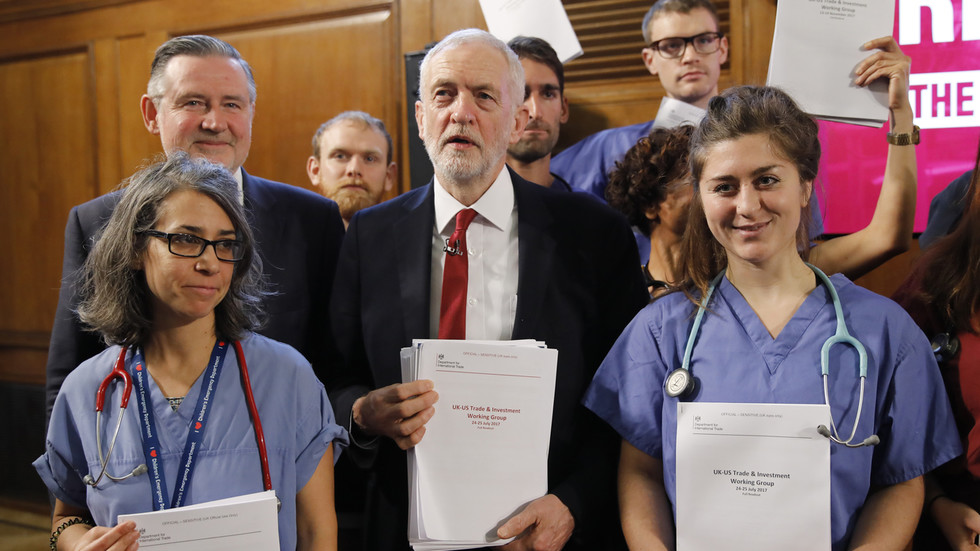 Labour leader Jeremy Corbyn has angrily dismissed suggestions that an unredacted report on UK-US trade discussions he obtained was leaked by Russian ‘hackers’ – claiming such accusations were a sign of Tory “desperation.”

In an interview with Sky News on Tuesday, Corbyn was asked to comment on claims made by Graphika, a social media analytics firm, on Monday night, that the release of the uncensored 451-page document had links to Russia. The dossier was first made available on the discussion site Reddit in October.

This is such nonsense. Such utter nonsense. This is desperation by the Conservative party… not even the government has claimed they’re false documents.

Corbyn argued that the Tories had “challenged our analysis” of the official papers, but they hadn’t “challenged the honesty of those documents.”

Earlier on Tuesday, Labour’s Laura Pidcock told Sky News’ Kay Burley that the claims were a “massive distraction from the fundamental issue” – that the Tories can’t be trusted with the NHS.

In a dramatic news conference in late November, the Labour leader held aloft the report, and accused PM Boris Johnson of a “cover up.” Corbyn claimed details of UK-US post-Brexit trade talks contained within the documents, proved not only that there was a “plot against our NHS,” but a “plot against our country.”

He asserted that the documents related to six rounds of talks between US and UK officials and related to key issues such as drug pricing – which are often higher in the US.

One line in particular, which went viral on Twitter, was a section where the US talks about the opportunities in a ‘no-deal’ Brexit situation, insisting that in such a scenario “there would be all to play for.”