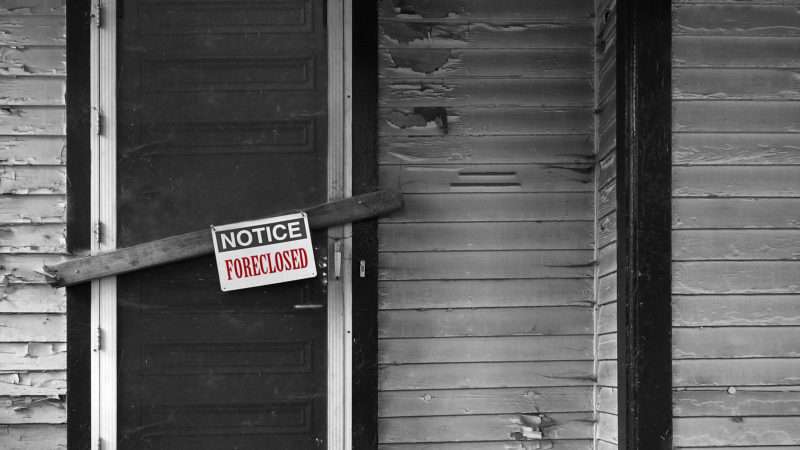 The Michigan Supreme Court issued a sweeping rebuke last week to Oakland County’s decision to seize a retiree’s home over $ 8.41 in unpaid taxes. Now county officials are worried they could be on the hook for more than $ 30 million in payments to former homeowners victimized by the same aggressive forfeiture scheme.

In a letter sent this week to Oakland County Treasurer Andrew Meisner, county commissioners demanded answers. “It appears your actions as Treasurer to foreclose on an Oakland County retiree’s property for $ 8.41 has exposed the county to serious risk,” it says. The letter informs Meisner that the county plans to form a special committee to investigate officials’ use of tax asset forfeiture and to “make recommendations to protect the Oakland County taxpayers.”

As Reason reported last year, Michigan state law empowers county treasurers to take aggressive actions to quickly foreclosure and auction properties with unpaid taxes. The law allows counties to keep the excess proceeds from those auctions, a provision that has created a perverse incentive for counties to seize homes, sell them, and keep the profits.

Uri Rafaeli, the plaintiff in the case that was before the state Supreme Court, lost his Southfield home in 2014 because he’d accidentally underpaid his taxes by $ 8.41. The county pocketed nearly $ 24,500 from the sale of his property. In another Michigan case that’s gained some media attention, Gratiot County seized 35 acres of land from Donald Freed over a $ 750 tax debt. The property was auctioned for more than $ 100,000—and, of course, the county kept the change.

In the Rafaeli case, Oakland County was “required to return the surplus proceeds to plaintiffs, and defendants’ failure to do so constituted a government taking under the Michigan Constitution entitling plaintiffs to just compensation,” Justice Brian Zahra wrote in the state Supreme Court’s ruling last week. The high court sent the case back down to a lower court to decide how Rafaeli should be compensated.

While county officials are quick to point the finger at Meisner, the real culprit here is the 1999 state law that created this mess in the first place. In a statement after last week’s state Supreme Court ruling, Meisner said he was merely following the law when he authorized the seizure of Rafaeli’s home. Now that the state’s highest court has found constitutional issues with how counties do that, Meisner added, he was looking “forward to working with the Legislature to change this state law in a way that works well for property owners and our local communities, while being fair to the majority of property owners who pay their property taxes on time.”

In the meantime, Meisner’s office seems likely to face additional scrutiny. The Detroit News reports that the Oakland County board of commissioners is seeking information about how many properties have been foreclosed, what profits the county kept, and how those funds were spent.

Some of that information has been available for county commissioners to review for years, if only they’d cared to look. Like many other counties in Michigan, Oakland County maintains a “delinquent tax revolving fund” (DTRF) where the proceeds from tax asset forfeitures are deposited. If the county has a positive balance in its DTRF at the end of a fiscal year, the excess funds can be channeled into the county budget.

That’s how Wayne County has funneled more than $ 382 million in delinquent tax surpluses into its general fund budget since 2012, according to an analysis by Bridge magazine, a Michigan-based nonprofit publication.

In Oakland County, where Rafaeli’s Southfield property was seized and sold in 2014, the process has been lucrative too. According to the county’s most recent comprehensive annual financial report, its DTRF had $ 196.8 million in net assets.

The same document details plans to use the DTRF for a number of pet projects, including the construction of a new animal shelter and adoption center. The county also “anticipates the continuation of annual transfers from the DTRF to support General Fund/General Purpose operations in the amount of $ 3.0 million annually for FY 2019 through FY 2023″—totals that are in line with historical norms, according to the annual report.

The most important thing for state and county officials to do now is to ensure they update their policies and practices to reflect last week’s Supreme Court ruling, thus protecting homeowners from facing a similar fate. But scrutiny of past forfeitures is certainly warranted—and homeowners like Rafaeli deserve major refunds.

Indeed, county attorneys always knew they could end up on the hook for huge payments to compensate homeowners who had their equity stolen for unpaid tax bills. During oral arguments before the state Supreme Court, attorneys for Oakland County argued that it was impossible for local governments to compensate all homeowners who had been caught in similar circumstances. The price tag, they estimated, would be more than $ 2 billion statewide.

The state Supreme Court literally laughed off the idea that property owners shouldn’t be fairly compensated because that would create a fiscal burden for the counties that ripped them off. After years of stealing excess value from homeowners to pad their own budgets, Michigan counties appear headed for a reckoning with their unconstitutional behavior.