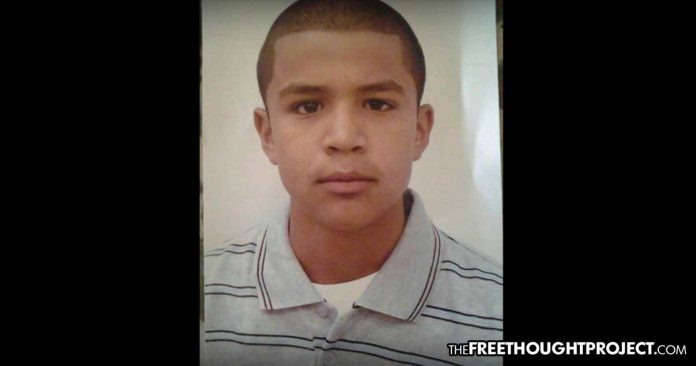 TUCSON, Ariz. – (CN) A small, loud protest erupted outside the Evo A. DeConcini Courthouse Wednesday after a federal jury acquitted a U.S. Border Patrol agent of involuntary manslaughter in the 2012 shooting death of a Mexican teenager.

Lonnie Swartz, a two-year veteran agent, opened fire on Oct. 10, 2012 through an urban fence separating the U.S. from Mexico after responding to help other agents who were trying to catch marijuana smugglers. He killed 16-year-old Jose Antonio Elena Rodriguez, who prosecutors and defense attorneys agreed was throwing rocks to distract the agents. Thirteen bullets hit the boy, all but three from the back.

Richard Boren, a volunteer with the Border Patrol Victims Network, protested often during the 16-day trial and was in front of the courthouse Wednesday. He called the acquittal a travesty of justice that gives other agents the green light to unnecessarily use deadly force.

“These agents are going to continue to use lethal force with impunity, which they’ve always gotten away with,” said Boren before heading toward the courthouse entrance, shouting that President Trump condones shooting rock throwers.

“What level have we stooped to in this country?” he demanded.

After allowing Boren to speak for a few minutes, Department of Homeland Security officers escorted him to a nearby sidewalk off the courthouse grounds. After he returned twice to the courthouse property, officers led him inside in handcuffs.

This is Swartz’s second trial stemming from the shooting. In April, a different jury acquitted him of second-degree murder, but deadlocked on manslaughter charges, clearing the way for another trial. Jurors did not return a verdict Wednesday on the voluntary manslaughter charge, which could make a third trial possible.

Prosecutors and defense attorneys will discuss a possible third trial at a status conference later this month before U.S. District Judge Raner Collins.

“I think Lonnie Swartz is the victim here,” he said outside the courthouse.

Swartz claimed on the witness stand that he was protecting himself and fellow agents from the rocks, which Elena had been lobbing up and over a 37-foot barrier from about 100 feet away. He was afraid for his life, and followed his training to eliminate the threat, he testified. Swartz said he saw a second gunman, and that’s why he kept shooting after the boy fell.

Prosecutors argued that Swartz was not afraid but angry the night of the shooting, when he walked slowly along a border fence for 34 seconds, shooting into Mexico from the U.S. He fired 16 shots from three positions along the fence, stopping after 13 shots to reload his semi-automatic handgun.

A blood splatter expert testified for the prosecution that the boy was moving after he fell, meaning Swartz executed a helpless teen.

Swartz, who has been on administrative leave since the shooting, quickly left the courthouse with his attorneys after the verdict. His attorneys did not immediately return a phone call seeking comment.

Even if prosecutors don’t seek a third criminal trial, Swartz will likely return to court over the shooting. Elena’s mother, Aricceli Rodriguez, sued him, and the Ninth Circuit recently ruled that Swartz’s status as a law enforcement officer does not protect him from lawsuits.

That lawsuit is still pending.

Like Covid: Will Government’s Reaction To Inflation Make Everything Much Worse?