Havana: Cuba marked the end of an era Thursday as Miguel Diaz-Canel was formally elected as the country`s new president,… 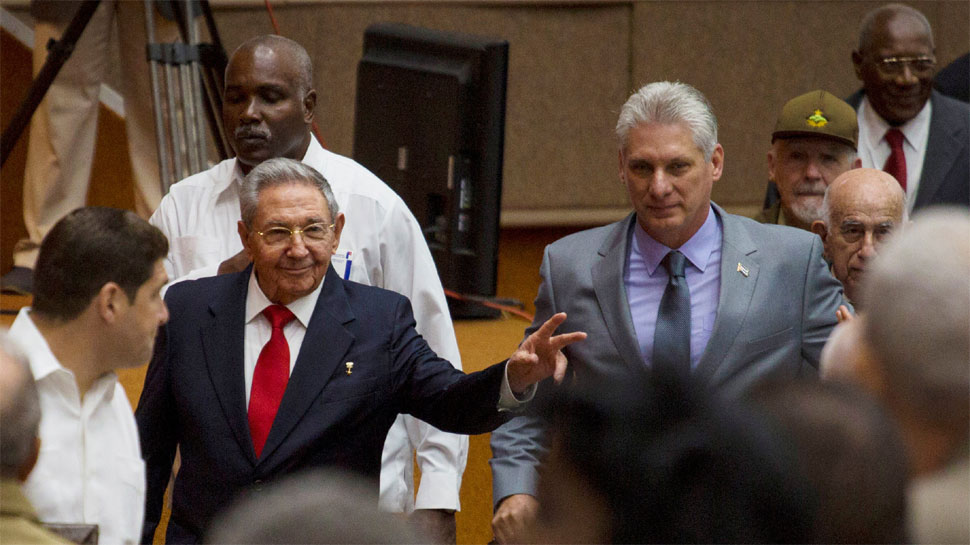 Havana: Cuba marked the end of an era Thursday as Miguel Diaz-Canel was formally elected as the country`s new president, succeeding Raul Castro and becoming the first non-Castro to lead the island in six decades.

The silver-haired Diaz-Canel – a top Communist Party figure who has served as first vice president since 2013 – is the island`s first leader born after the 1959 revolution.

Diaz-Canel was elected in a landmark vote of the National Assembly a day before his 58th birthday.

The chamber erupted into applause as the results were read out, with many of the delegates smiling, and shaking hands warmly with Castro and Diaz-Canel.

As Diaz-Canel walked to the front of the chamber, he high-fived the front line of delegates, embracing Castro as he took to the stage, images broadcast on state television showed.

Then the 86-year-old Castro raised his successor`s arm in the air in victory, prompting another wave of applause from the delegates — some were in their shirt sleeves, while others wore military fatigues.

Between them, father of the nation Fidel and his younger brother Raul made the Caribbean island a key player in the Cold War and helped keep communism afloat despite the collapse of the Soviet Union.

Raul has been in power since 2006, when he took over after illness sidelined Fidel, who seized power in the revolution.

Diaz-Canel, who has spent years climbing the party ranks, was named the sole candidate for the presidency on Wednesday.

Thursday`s symbolic vote took place on the anniversary of the 1961 Bay of Pigs invasion, when Fidel`s forces defeated 1,400 US-backed rebels seeking to overthrow him.

Havana has long hailed the showdown as American imperialism`s first great defeat in Latin America. Diaz-Canel, who some say bears a passing resemblance to American actor Richard Gere, is a fan of The Beatles whose penchant for wearing jeans has set him apart in Havana`s corridors of power.

Although he has advocated fewer restrictions on the press and a greater openness to the internet, he also has a ruthless streak, with harsh words for Cuba`s dissidents and the United States.

Crucially, he will remain under the watchful eye of Castro, who will continue to serve as the head of Cuba`s all-powerful Communist Party.

Once sworn in, Diaz-Canel will be tasked with pursuing reforms begun by Castro to open up Cuba`s economy to small private entrepreneurs and reach a rapprochement with its Cold War arch-enemy, the United States.

In 2015, Havana and Washington renewed diplomatic ties, with then president Barack Obama making a historic visit to the island a year later.

But, steps towards a normalization of ties have been severely curtailed since Donald Trump arrived in the White House last year.

Diaz-Canel will also inherit a youthful population hungry for change on the Caribbean island — one of the world`s last outposts of Communism since the collapse of the Soviet Union.

Cuba watchers and domestic analysts say he will favor continuity over change in the early days of his presidency, however.