Top Story Astronomers using data from the Gemini and W. M. Keck observatories in Hawaii have encountered a galaxy that… 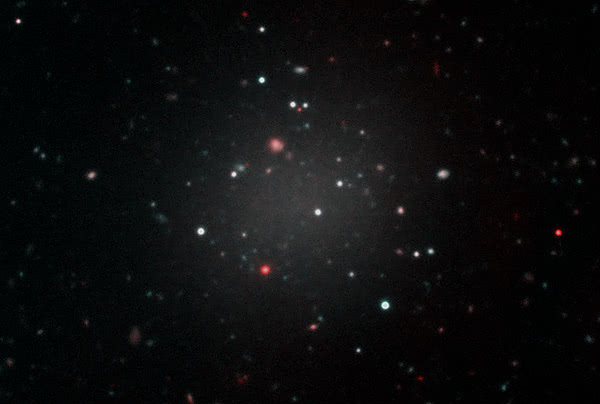 Astronomers using data from the Gemini and W. M. Keck observatories in Hawaii have encountered a galaxy that appears to have almost no dark matter. Since the universe is dominated by dark matter, and it is the foundation upon which galaxies are built, “this is a game changer,” according to principal investigator Pieter van Dokkum of Yale University. Galaxies and dark matter go hand in hand; you typically don’t find one without the other. So when researchers uncovered a galaxy, known as NGC1052-DF2, that is almost completely devoid of the stuff, they were shocked. Given its large size and faint appearance, astronomers classify NGC1052-DF2 as an ultra-diffuse galaxy, a relatively new type of galaxy that was first discovered in 2015. Ultra-diffuse galaxies are surprisingly common. However, no other galaxy of this type yet-discovered is so lacking in dark matter. To peer even deeper into this unique galaxy, the team used the Gemini Multi Object Spectrograph to capture detailed images of NGC1052-DF2, assess its structure and confirm that the galaxy had no signs of interactions with other galaxies.

How best to talk to your science-denying relatives this Christmas

Cocaine in the water makes eels hyperactive and damages muscles

Treeconomics: How to put a fair price tag on urban forests