As thousands of Americans die each year from opioid overdoses, an independent investigation into the Drug Enforcement Agency’s conduct has… 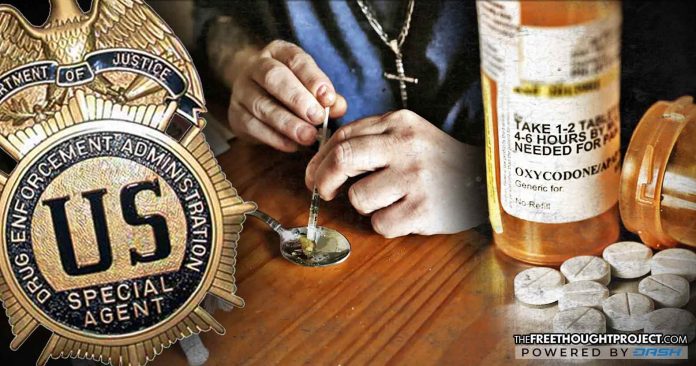 As thousands of Americans die each year from opioid overdoses, an independent investigation into the Drug Enforcement Agency’s conduct has found that it has been issuing controlled substance licenses to drug dealers, drug addicts, convicted felons and dead people, which is just one of the many things that have fueled the current crisis.

The investigation, which was conducted by the Daily Caller, noted that in 2006, only 510,000 individuals and organizations held controlled substance licenses. As of March 2018, that number had increased drastically to 1.7 million licenses. According to the report:

One dentist, for example, admitted to helping “an outlaw motorcycle gang” manufacture methamphetamine in the early 2000s, which resulted in two years of jail time, a DEA document said. He’d previously been caught with meth several times and admitted to “a history of substance abuse with alcohol, marijuana, methamphetamine and cocaine.

That same dentist was given a license to prescribe controlled substances in 2012. A doctor was also given a license, in 2009, even though he had previously had a run-in with the DEA when he was caught distributing cocaine.

A doctor was caught distributing cocaine in 1981 but wasn’t prosecuted because he cooperated with authorities, another DEA document shows. He was arrested again in 2001 with cocaine and two prescription drugs — an opioid and a minor tranquilizer — and pleaded guilty to related charges in 2003.

While the total number of DEA licensed providers exceeds 1.4 million people, it appears as though the agency is not doing its due diligence when it comes to regulating how opiates are being diverted from distributors directly to the street-corner drug dealers. The Office of Diversion Control, as it’s known, is the DEA department that is tasked with policing when opiates are being diverted from legitimate uses to nefarious ones.

The pipeline runs from the pharmaceutical company’s production line, through distributors into pharmacies and further down to drug dealers. But it seems as though they are not doing their job. The investigation found that licenses are also held by both people who have died and people who are in prison:

More than 760 people of the then-1.4 million registered with the DEA “were potentially ineligible” for licenses because the Social Security Administration reported them as dead, they did not have state-level permission to prescribe or distribute controlled substances or “were incarcerated for felony offenses related to controlled substances.”

Some of the DEA’s license holders did not even provide a social security number making it impossible to conduct a background check prior to the license being issued.

…nearly 700 Social Security numbers in the DEA’s database were registered to multiple names or variations of names, “which can be a risk indicator of potential fraud,” the report showed.

Instead of supplying the required social security number, some applicants listed an employer identification number:

Another nearly 42,000 entries in the DEA’s database listed an employer identification number rather than a Social Security number, the GAO found, which makes it more difficult to conduct background checks and prevent fraudulent identities.

It is not as if the DEA is underfunded and cannot police the pharmaceutical industry or even its own licensing loopholes. In 2013, the agency took in $ 328 million in licensing fees. There is more than enough money to hire agents and investigators to oversee the distribution and diversion crimes being committed.

But according to last year’s former DEA Office of Diversion Control executives, who blew the whistle in an explosive report, little to nothing is being done. As the whistleblowers allege, Big Pharma is writing policy for the DEA to protect its distribution network. Not only has Big Pharma placed its lawyers within the agency, but former DEA agents now work for Big Pharma in an incestuous pool that is controlling the opiate supply chain.

Joe Rannazzisi, former head of the Office of Diversion Control for the DEA, uncovered how one West Virginia town of 3,000 people had been shipped 21 million opioid pills but was stymied into not being able to do anything about it.

“This is an industry that’s out of control. What they wanna do, is do what they wanna do, and not worry about what the law is,” Rannazzisi told 60 Minutes. “And if they don’t follow the law in the drug supply, people die. That’s just it. People die. This is an industry that allowed millions and millions of drugs to go into bad pharmacies and doctors’ offices that distributed them out to people who had no legitimate need for those drugs.”

After Rannazzisi exposed the diversion pipeline in West Virginia, as well as other diversion hot spots, the former DEA executive said Congress passed a law making it nearly impossible for anyone to do anything about it. It is called the “Ensuring Patient Access and Effective Drug Enforcement Act,” which was passed in 2016 and signed into law. He said top DEA officials, along with Big Pharma lobbyists, helped draft the law—further shielding their profits from DEA fines for diversion infractions.

“The new law makes it virtually impossible for the DEA to freeze suspicious narcotic shipments from the companies,” Rannazzisi said.

Rannazzisi resigned shortly after the law’s passage but he did not stay silent. Unfortunately, it is now up to the American people to take on the opioid crisis head-on. The will of the people must be changed in order for Big Pharma’s death grip over the population to be released. The only hope, it seems, for people to end their addiction to opiates lies, ironically, in another substance the DEA has classified as more harmful than opiates—Marijuana.

As The Free Thought Project has reported, doctors in Boston have over an 80 percent success rate ending opiate and heroin addiction using concentrated forms of cannabis. Until cannabis is made legal nationwide, opiate-addicted Americans will continue to seek out their drugs, which the DEA is all too complicit in supplying.